The provincial NDP wants to ban renovictions in Ontario and create stricter fines for landlords attempting to illegally evict tenants.

It advocates for a public eviction registry to identify repeat offenders so prospective renters can see landlords that are frequently evicting tenants. The bill would also grant tenants access to legal representation and compensation if they are evicted.

The Ontario government’s rental housing enforcement unit would be responsible for investigating and auditing evictions.

“The financial struggles faced by so many residents due to COVID-19 has been compounded by Doug Ford passing legislation mid-pandemic that makes it easier for landlords to evict tenants,” Bell said in a press release.

The opposition bill will face a major hurdle: Doug Ford’s Progressive Conservatives hold a majority in the Queen’s Park legislature.

Currently, the maximum landlords can raise rent is capped by provincial guidelines. The Ford government has also announced legislation to freeze rent for most tenants in 2021.

But Bell says that won’t protect tenants in Ontario from “renovictions.” It’s one tactic used by landlords to force tenants out while undertaking major renovations and then re-listing the property for much higher than the original rent.

Tenants currently have the right of first refusal to move back in when renovations are complete. That’s supposed to occur without a substantial increase in rent. But there is no law in place forcing landlords to contact the former tenant.

Personal-use evictions are another method used by landlords to evict tenants. They may claim family is moving in for the purpose of evicting tenants. They then re-list the property and increase the rent. 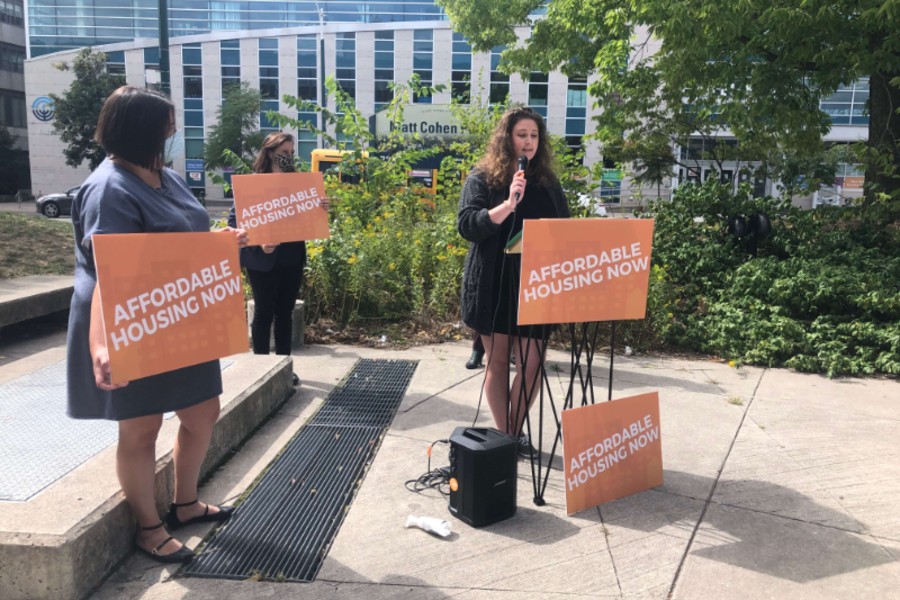 Caitlin Gowans, a Toronto resident who was forced to find a new place to live in after her and her partner were renovicted, shared her story at Matt Cohen Park on Thursday during MPP Bell’s announcement.

Even though these eviction strategies are illegal, Bell said the vast majority never reach the Landlord and Tenant Board (LTB).

“In most cases, the stress and fear of an eviction results in the tenant giving up and moving out long before the landlord files an official eviction claim,” she says.

“This will become an issue once COVID subsides,” she adds. “Toronto is one one of the hottest property markets in the world.”

Asked about the opposition’s proposed bill, Adam Wilson, the manager of issues management and legislative affairs in the office of the minister of municipal affairs and housing, responded in an email. He says that Premier Ford’s Bill 184 introduced “a number of measures to prevent and discourage illegal evictions for renovations.”

Wilson says the NDP did not support the bill, which requires landlords to disclose to the LTB if they have previously filed for eviction to renovate the unit.

The bill doubled fines for unlawful evictions to $50,000 for an individual and $250,000 for a corporation. It also increased tenant compensation for bad faith evictions – up to an additional 12 month’s rent and one month’s rent for evictions for renovations or repairs.

Bell counters that “[The bill] does have some measures that are halfway steps towards protecting tenants in Ontario from renovictions, but it’s nowhere near what is needed to fairly protect tenants from unfair eviction.”

Bell says that Bill 184 doesn’t do enough to protect tenants from being evicted if they’re falling behind on rent. Under the bill, if a landlord and a tenant agree on a rent repayment plan, the tenant loses the right to contest an eviction at the LTB.

“That is very concerning in a time where thousands and thousands of renters have lost their job through no fault of their own,” says Bell.

What about an eviction moratorium?

The NDP’s private members’ bill arrives against the backdrop of tenant-led protests against the expiration of Ontario’s eviction moratorium on July 31.

After Bill 184 passed in July, tenant advocates in Toronto organized protests across the city. They called on Mayor John Tory to implement a moratorium on evictions if the province wouldn’t.

Housing advocates have since called on the province to reinstate the ban, which Ford introduced at the beginning of the pandemic to protect renters that lost work due to the crisis. Between mid-March and mid-July, the LTB processed more than 6,000 landlord requests to evict tenants for non-payment of rent.

Chiara Padovani, a tenant organizer and the founding member of the York South-Weston Tenants’ Union, says the increased risk of homelessness as a result of evictions remains a real concern.

“Whether they are no-fault evictions, whether they are illegally increasing rents to the point where people can’t afford to pay them anyway, all of that comes from a financial motive, which is profit-driven in our housing system,” Padovani says. “That comes from not having vacancy control.”

Vacancy control, she argues, would stop landlords from increasing rent without limits in between tenants, and would discourage tactics such as renovictions.

Renting in Ontario: How to avoid renovictions