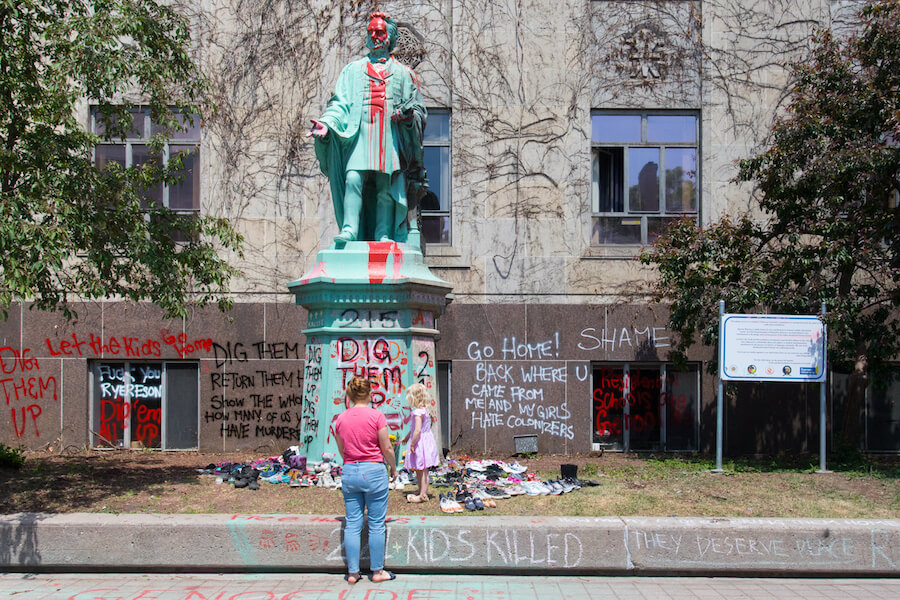 The statue of Egerton Ryerson has become a focal point for anger and grief following the discovery of an unmarked mass grave containing the remains of 215 children at a former residential school site in Kamloops, BC.

On Monday night, Indigenous youth staged a sit-in near the statue on Ryerson University’s downtown campus until 215 shoes were placed there. It has also been splattered with red paint and covered in graffiti that reads “dig them up.”

On Instagram a group called X University (@wreckonciliation_x_university) said, “We will be occupying the space until we meet 215 pairs of shoes.” The group’s name refers to the push to remove the statue and rename the university.

Egerton Ryerson was the chief superintendent of education for Upper Canada and his recommendations were “instrumental in the design and implementation of the Indian Residential School System,” according to a plaque installed outside the statue on Gould Street in 2018.

“In 2015, the Truth and Reconciliation Commission reported that children in the schools were subjected to unthinkable abuse and neglect, to medical experimentation, punishment for the practice of cultures or languages and death,” the plaque reads. “The aim of the Residential School System was cultural genocide.”

There have been repeated calls over the years from Indigenous students and activists to remove the Ryerson statue.

Last July, Black Lives Matter splattered the statue with pink paint and demanded the school take it down. Police later arrested and charged three people with mischief, leading to an hours-long standoff outside 52 Division.

The university’s president Mohamed Lachemi responded to the protest action by acknowledging Egerton Ryerson’s role in Canada’s residential schools policy, but said the school had not made a decision on whether or not to remove the statue.

“It is so important to examine, discuss and debate issues that are deeply intertwined with our individual and collective histories,” he wrote.

Demonstrators placed shoes around the statue to represent the remains of 215 children found in the Kamloops mass grave.

Lachemi released a statement on May 31 in response to the discovery of the Kamloops residential school burial site that offered sympathies and listed support services, but did not mention the statue.

“As I think of the challenges and impact this news has on the Indigenous community here at Ryerson, I am asking our community to pause and reflect,” he said.

On May 28, Tk’emlúps te Secwépemc Kukpi7 (chief) Rosanne Casimir announced that ground-penetrating radar technology helped discover the remains at the Kamloops Indian Residential School, which was once the largest residential school in Canada.

“I want to extend my heartfelt gratitude for the outpouring of support to our community,” Casimir said in a follow-up news release on Monday night. “Thank you for helping us bring to light such hard truths that came from the preliminary findings regarding the unmarked burial sites of Kamloops Indian Residential School students so that we may begin the process of honouring the lost loved ones who are in our caretaking. We love, honour, and respect these children, their families and communities.”

Prime Minister Justin Trudeau said on Monday he would meet with cabinet ministers overseeing Indigenous policy to discuss what action could be taken but did not give details.

Federal NDP leader Jagmeet Singh has called for an emergency debate in the House of Commons and said Ottawa should investigate and finance the identification of other similar unmarked burial sites.

In response to Trudeau and the other federal parties, Casimir wrote: “We acknowledge your gestures, but as a community who is burdened with the legacy of a federally mandated Indian Residential School, Canada must face ownership and accountability to Tk̓emlúps te Secwépemc as well as all communities and families. Our community is still gathering all the facts in this evolving tragedy. We will keep you informed as more information comes to light.”