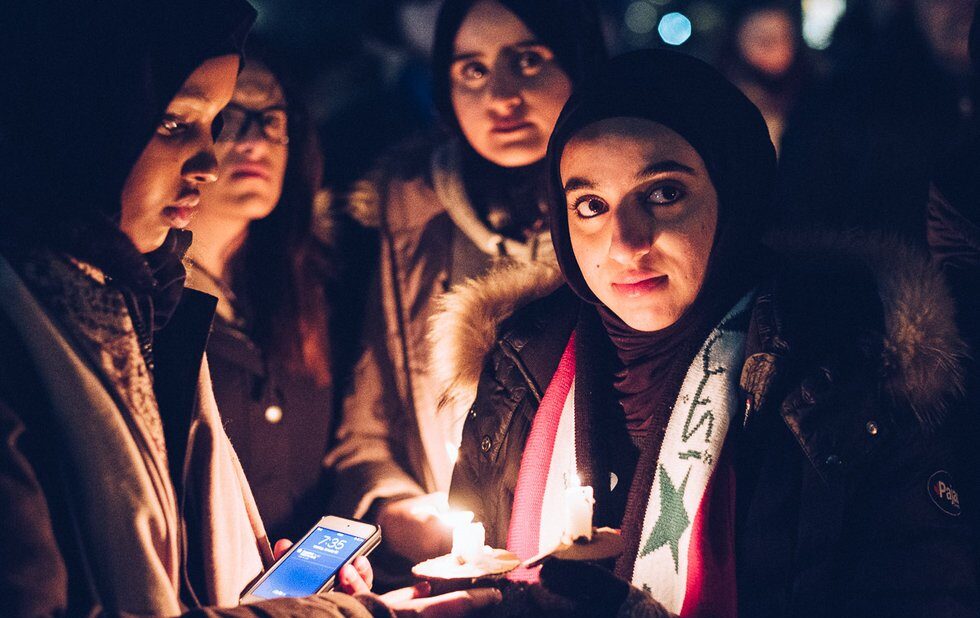 Two years after the night Alexandre Bissonnette opened fire on worshippers at prayer at the Islamic Cultural Centre of Quebec City, the names of the dead stay with us: Abdelkrim Hassane, Azzedine Soufiane, Aboubaker Thabti, Ibrahima Barry, Khaled Belkacemi and Mamadou Tanou Barry. Nineteen others were injured.

As vigils flicker across the country this week to remember the six Muslim men who died in the attack on January 29, 2017, I think of Soufiane, who ran straight at Bissonnette when Bissonnette began shooting, to try and disarm him. Bissonnette was armed with a pistol and a rifle. Soufiane was 57 years old.

I also think of Aymen Derbali, who intentionally drew fire to prevent Bissonnette from hurting his fellow worshippers. Now paralyzed, Derbali has said that, “Unlike many others, I’m able to bear witness.”

In Muslim traditions, the words “witness” and “martyr” share the same Arabic root. In these bleak political times, bearing witness will mean taking the long view of history.

As Muslims, we remember that the first person killed in a post-9/11 U.S. hate crime was not Muslim. Balbir Singh Sodhi was Sikh, but he wore a beard and turban, which enraged the man who killed him, Frank Silva Roque.

Since Sodhi’s death, a more recent pattern has emerged of white supremacist mass shootings at places of worship.

In August 2012, gunman Wade Michael Page, a well-known white supremacist and former Army veteran, killed six people at the Oak Creek Gurdwara in Wisconsin. The temple’s congregation had been in the midst of preparing that day’s langar, a free meal open to all visitors, regardless of religion, gender or finances.

Three years later, Dylann Storm Roof attacked one of the oldest Black churches in the U.S., the Emanuel African Methodist Episcopal Church in Charleston. He killed nine Black worshippers in the midst of Bible study on June 17, 2015.

This past fall, Robert Bowers killed 11 people attending Shabbat services at Pittsburgh’s Tree of Life Synagogue. Bowers’s October 27, 2018, attack appears to have been driven at least in part by his rage that Jewish organizations were helping welcome refugees into the U.S.

Each of these men prolifically documented their allegiances to white supremacy. And yet, police, politicians and pundits frequently called them “lone wolves,” as though their attacks were an accident of misanthropy or mental illness.

Devastating as they have been, what has made the attacks horrifying is that they are becoming familiar.

After all, this arc of death spans a continent that has seen governments spend centuries attacking Indigenous spiritualities. Duncan Campbell Scott, architect of Canada’s residential school system, declared in 1920, “I want to get rid of the Indian problem.” As a consequence, Canada is now pitted with the mass graves of Indigenous children.

Rather than viewing attacks on organized faith as different from attacks on Indigenous spirituality, we need to remember that the latter isn’t any less horrifying than the former, just because the state was the attacker, rather than an enraged gunman. White supremacy threads through government institutions, as it does through extreme right-wing groups. If it didn’t, thousands of Indigenous children would not have been tortured, starved, and sexually assaulted because they were not white and Christian.

Muslim or not, our histories are tied up in each other. Our survival must be, too.

We heed Soufiane’s last words, described by survivor Merouane Rachidi: “He looked at me and said that [he] is just a single person, we shouldn’t be afraid. And it was with that sentence that still echoes in my ears that Azzedine, the hero, tried to encourage our brothers that even if it was an armed terrorist, for Azzedine, there was enough of us to neutralize him.”

Across many communities there are enough of us – each grappling with our specific fears and griefs – to counteract white supremacy. It will require courage and it will take organizing and that we see through short-term fixes.

For instance, some commentators have suggested we need more cameras inside our mosques. But Bissonnette was undeterred by the six different angles at which security cameras filmed his massacre.

Moreover, Muslims are already subject to systematically disproportionate surveillance. As NYC-based organization Desis Rising Up and Moving noted after Oak Creek, “As communities of colour, we face the double targeting of having our race and religion being used as the basis for state policies of surveillance and policing, as well as the unchecked racist violence and terrorism of organized hate groups.”

The same holds true in Canada. Mohamed Belkhadir, a worshipper who ran toward the mosque upon hearing there was a shooting underway, was the first person apprehended by police. He was placing his coat over the injured, trying to keep them warm in the bleak cold of that January night, when he was taken into custody: a Muslim man providing solace to the victims of a white supremacist attack. He was released shortly thereafter.

We don’t need metal detectors. We don’t need politicians and photo ops. We need campaigns that squarely confront white supremacy’s root causes – from anti-refugee hysteria to the war on terror. We need each other, across the breadth of our backgrounds.

We refuse the naïve déjà vu of isolationism and depoliticized horror. We refuse to resign ourselves to mourning with no foreseeable end.

Instead we remember the bravery of people like Soufiane, Derbali and Bekhadir. In classrooms, with our families and in our prayer circles, we must turn from mourning to organizing across communities. There are enough of us to win.

Fathima Cader is a human rights lawyer based in Toronto.