The steps of the Ontario legislature transformed into a classroom today (July 19) with a public sex-ed class from the. 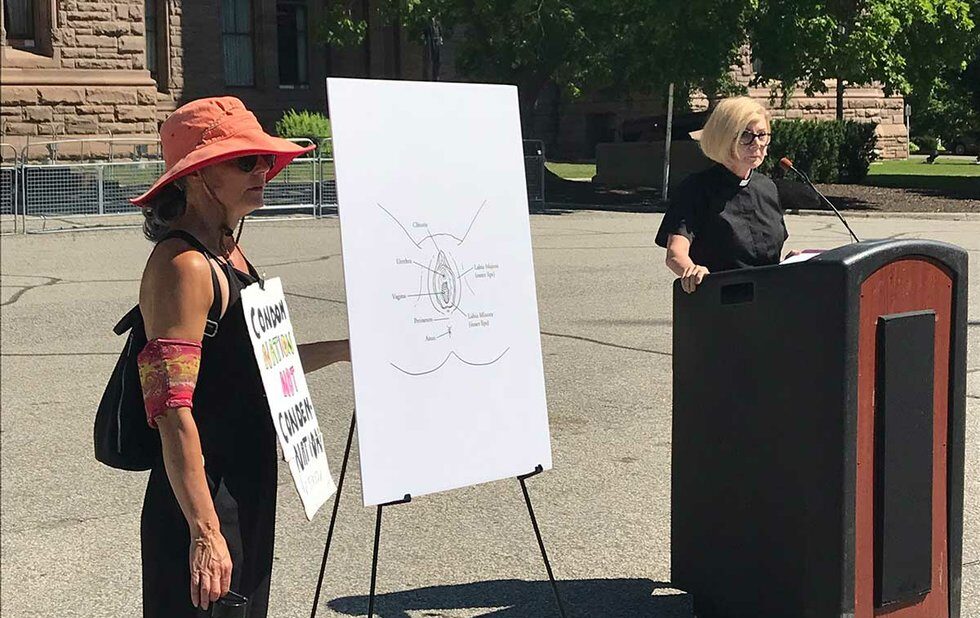 A young protestor reads a section from the current sex-ed curriculum at a rally outside Queen's Park on July 19.|Former NDP MPP Cheri DiNovo addresses the crowd at a protest against Premier Doug Ford's proposed changes to Ontario's sex-ed curriculum.

The steps of the Ontario legislature transformed into a classroom today (July 19) with a public sex-ed class from the 2015 curriculum. Dozens of “students” of all ages gathered to protest Premier Doug Fords decision to replace the current curriculum with the 1998 version.

Organized by parents Joanne OSullivan and Cyrus Lane, the class involved a rotation of speakers reading sequentially by grade. Readers included a sex-ed teacher, parents and children one girl in grade 6 read the curriculum from her respective grade level.

There was so much misinformation when this curriculum came out in 2015, and I would guess that 90 per cent of people protesting against it did not read it, says OSullivan. I want people to read it and see that it is age appropriate, important and necessary.

The event was organized less than a week ago on Facebook, with a post stating: This is a peaceful protest against the Ontario provincial governments short-sighted decision to retract the 2015 updated Health and Physical Education Curriculum in our schools.

O’Sullivan adds, We are arming our children to say ‘no,’ and to understand what is happening. To understand whats private is just so necessary. I cant fathom why anybody would not want the proper words taught to children about their own bodies.”

Among the speakers was Cheri DiNovo, minister of Trinity-St. Pauls Centre for Faith, Arts and Justice and former NDP MPP. She says that replacing the current curriculum is a human rights issue.

If our LGBTQ students are not treated equally in their curriculum, we are acting against the human rights code, says DiNovo, adding that Ford is listening to a very small fraction of the religious right, a group that has always opposed gay rights.

Queens park has recently been the site of several rallies. Last weekend, a rally against various changes made by Ford, including the sex-ed curriculum, saw over 150 people.

On Saturday (July 21), a protest called March for Education is being organized by Womens March Canada to fight against the repeal, calling it an unprecedented assault on students right to a fair and up to date education and is a deliberate insult to the LGBTQ and Indigenous communities of Ontario.