The case for reefer reparations 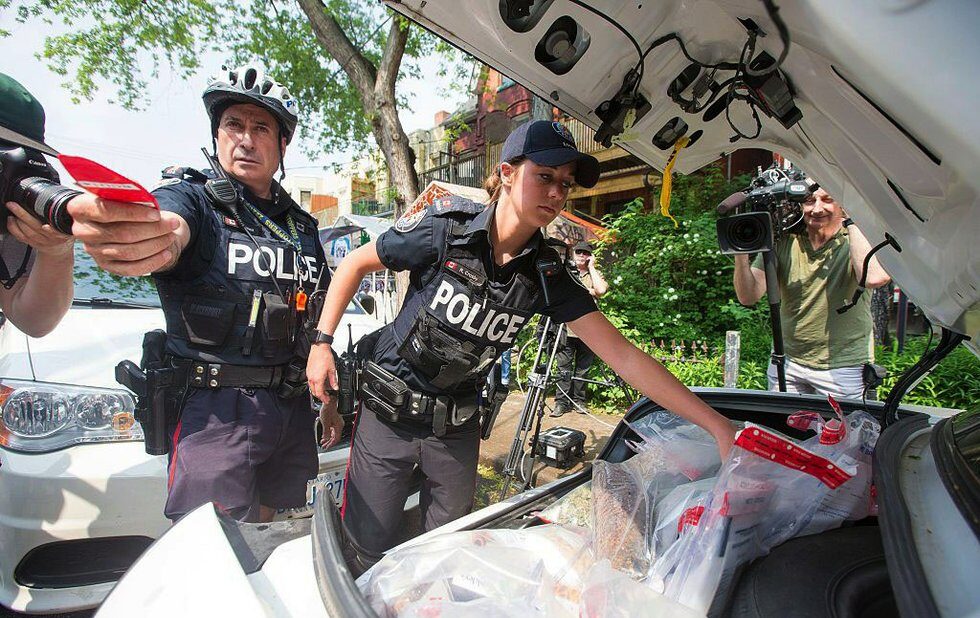 Police remove Marijuana products from Cannawide dispensary in Kensington Market on May 26, 2016.

The war on drugs has had a devastating and disproportionate effect on racialized groups, particularly young Black men.

Those are just two examples of how racism has underpinned the state’s failed war on drugs, a failure that has resulted in countless Black youth being criminalized for doing what 20 per cent of the Canadian population does mostly unfettered.

As the federal government prepares to legalize recreational cannabis next year, former politicians, lawyers, prime ministers and senior police officers have lined up to cash in as investors and advisors to licensed medical marijuana producers. Of course, the guys I grew up with who sold the stuff on the street are burdened with criminal records and other problems and don’t stand a chance in the legalized industry.

What exactly are the various levels of government planning to do to redress the harm done to thousands of Black youth who have received life-limiting criminal records due to recreational pot? More specifically, how will profits from the projected $23-billion industry be diverted to those most adversely affected by bad drug policy?

As University of Toronto sociology professor Akwasi Owusu-Bempah points out in a recent Toronto Star op-ed, cannabis possession has given police a broad pretext to probe further into the lives of Black youth more so than any other criminal offense. Combined with carding, this has meant possession charges become the leading “gateway” to criminal records that affect the mobility, employment and quality of life prospects of countless Black people, writes Owusu-Bempah.

Despite growing calls for “pot-equity,” federal cannabis czar, Bill Blair, Toronto’s former police chief (and proponent of carding), has been silent on the equity issue, saying only that the federal government will look at the possibility of granting pardons after legalization comes into effect. As it stands, those convicted of marijuana-related offenses, with the exception (maybe) of minor offenses, would currently not qualify to become licensed producers.

But pardons are only one part of a just and equitable cannabis legalization framework. What’s needed is a comprehensive strategy that ensures people have options.

An equity-based approach to legalization would include financial, government and educational initiatives that share the same purpose and outcomes.

Banks, for example, which will no doubt benefit from the legal pot economy, could create low-interest loan programs.

And the post-secondary education sector, particularly colleges, could play a huge role in training those interested in studying cannabis cultivation and business start-up through customized programs. These are just a few ideas that are being discussed in the Black community. But it’s troubling that we’re not hearing them come from government.

Anne McLellan, who chaired the federal Task Force on Cannabis Legalization and Regulation, says that the provinces will have to decide whether equity approaches are included in any future regulations.

“I have spoken publicly about my belief that a conviction for simple possession should not automatically deny someone the opportunity to apply for a federal license to become a licensed producer,” she tells NOW. Her report does discuss the importance of the Government of Canada consulting with Indigenous communities about both opportunities and challenges after legalization.

Other jurisdictions have tackled this issue head on.

With the passing of California’s Proposition 64, which legalized recreational cannabis use in 2016, Oakland ushered in an Equity Permit Program, which ensures that people who have criminal records due to cannabis possession are given preferential treatment when applying for permits to sell the drug legally. The program sets aside 50 per cent of the city-issued licenses to those affected by drug laws, effectively giving yesterday’s street corner pot dealer a fairer chance at becoming tomorrow’s cannabis entrepreneur.

This wasn’t exactly a popular idea, but then again equity-seeking social policies never are. The biggest pushback to Oakland’s program came predictably from business groups already established in the city’s cannabis industry. They view the equity program as a direct threat to their bottom line and have been vocal in wanting to see its scope limited if not entirely reversed.

And it’s not just retail opportunities that are at stake. What about the other spin-off businesses that stand to benefit from cannabis legalization? Does anyone at Toronto’s city council have what it takes to lead on that front?

Mayor John Tory wants in on the pot action. He wrote Ontario Premier Kathleen Wynne recently detailing how he’d like the city’s coffers to grow via a special pot levy. But he doesn’t seem particularly interested in equity, and is focused instead, says his director of communications Don Peat, on issues like rules around smoking in public, enforcement and proximity of retail marijuana outlets to schools and community centres.

Human rights lawyer Anthony Morgan says government should be thinking more broadly about how to realize equity-focused responses to legalization. He wants to see cannabis-generated revenues set aside to help young people access opportunities beyond the cannabis industry.

Morgan believes civil society and Black activists have key roles to play. He’s not convinced we will see an equity approach without their push.

Meanwhile, everyone else is already swooping in to make a killing.

Cannabis carding Marijuana The War On Drugs This week in NOW