From activist campaigns and podcasts to beaches and bike trails, NOW readers pick the best of the city 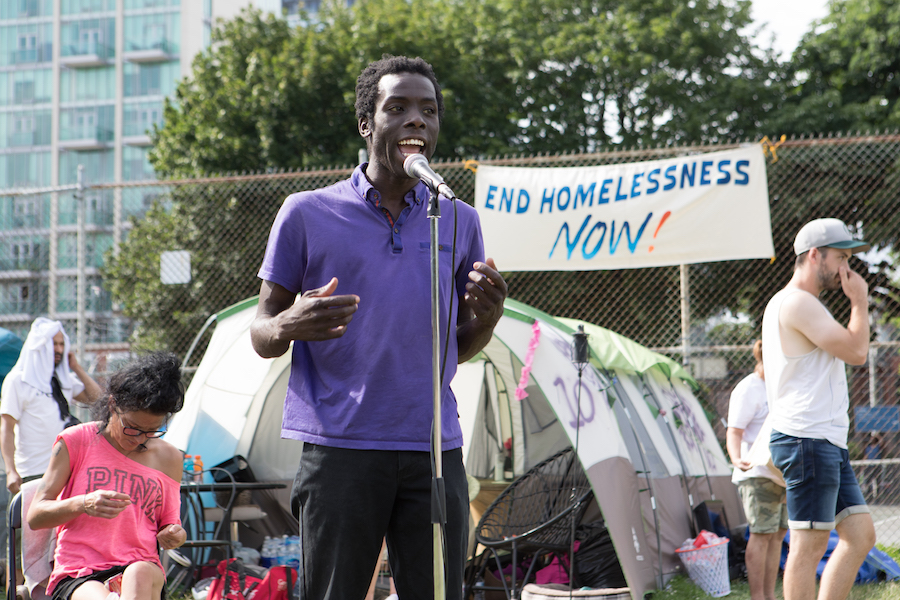 Desmond Cole speaks during a press conference at the Moss Park encampment on June 30, 2021.

For the “Cityscape” category in our annual best-of-Toronto Readers’ Choice poll, NOW readers name the people, activist groups and politicians making a mark on the city, as well as their favourite public spaces and local attractions.

He’s not in the public spotlight as much as he used to be. These days, Desmond Cole prefers to do his thing closer to his fave  grassroots causes. That’s not to say that he doesn’t resurface from time to time – like he did this summer over park encampments – to remind us all what it takes to keep fighting the good fight. One of Toronto’s best known activists has lessons to teach, after all. It’s just not always in the places you expect to find them.

From the moment the city went into a coronavirus-imposed lockdown it was clear the shelter system, which has been underfunded for years, couldn’t deal with the crowds and didn’t have the space to provide the physical distancing needed to prevent the spread of the virus. Encampments would soon start popping up in parks. But the city was clearly not ready to deal with the politics of that. Enter the Encampment Support Network.

The volunteer group of activists and locals jumped into the breach to provide basic essentials and advocate on residents’ behalf in ways that centred around the needs of the unhoused instead of traditional referral services. It was a radical experiment in giving agency to those most affected by homelessness – until the cops moved in.

Most of its Toronto founders have moved on to bigger projects, but the mark made on the city during a feisty decade-long rise has left an imprint that continues to attract new and younger people to the cause of Black liberation.

Students for a Free Tibet Canada

A boardwalk, sand and scenic views of the city skyline and majestic lake – also, sunbathing, snack bar, popcorn vendors, carnival music (on good weekends) and volleyball. Did we mention the playground and Blue Flag beach? And all of it within walking distance of Ashbridges Bay and Martin Goodman trails.

The pandemic has caused the city to rethink public space and new bike lanes have surfaced in previously unimaginable places like Yonge, University and even the Danforth. But it’s Bloor, a lane that was two decades in the making and received a much-needed revamp before the pandemic, that set the standard for connectivity and accessibility. It’s redefined Toronto’s main east-west spine.

Danforth from Broadview to Victoria Park

It’s hard to imagine that Gord Perks has been a Toronto councillor for almost two decades, having first been elected in 2006. But while others were sucked into the partisan and stifling vortex of city politics, Perks has managed to stay above the fray while remaining true to the cause of social democracy. Perks remains a fierce defender of all that’s good about Toronto.

The college named after founder of the Globe and a father of Canadian Confederation has been a mainstay in the city since it opened in 1967, offering courses in applied arts and technology and growing to three campuses, including a recently opened waterfront campus and an affiliation with Ryerson. More than 25,000 students from 35 countries take its correspondence courses. Today, it rates as one of the best research colleges in the country.

York U has long been thought of as not quite making the grade when it comes to higher education in the city – at least, compared to the more prestigious University of Toronto. But it has carved out an illustrious history in its own right as a centre for student activism and progressive politics at its campus north of the city – and now a centre for continuing education. A massive expansion has seen the university grow to the fourth largest in the country with a worldwide reputation for liberal arts, environmental studies, business and law.

Environmental groups come and go with the winds of change that usually mark the rise and fall of social movements. But this Toronto-based non-profit has successfully campaigned to make the city a greener, more sustainable and equitable place for more than 30 years, with an emphasis on local climate change, toxics and waste reduction issues.

Raymond Moriyama’s creation just north of Yonge and Bloor doesn’t get enough credit as an architectural landmark. But it took a pandemic and it’s closure for Torontonians to appreciate its important contribution to the culture of learning in the city. Its return to business this month has served to remind book lovers and architectural aficionados alike of its timelessness. Visitors have been all over Twitter about it.

Did you know one of the world’s most popular horror podcasts comes out of Toronto? True to its name, Parkdale is the setting of this clever audio-fiction thrillride, following two friends – played by creators Alex Nursall and Emily Kellogg – as they navigate a spooky Victorian house reno.

The Toronto Islands are easy to take for granted. To most locals, the ancient oasis-come-amusement park has just always been there to use at our leisure. Two major floods in the last five years and restrictions brought on by the pandemic have refocused attention on its importance and uniqueness as both a tourist and local destination. It has also sparked discussion on whether the airport occupying its western flank should be converted into greenspace. Maybe it’s an idea whose time has come.

A 13-minute boat ride from Jack Layton Ferry Terminal at the foot of Bay, 416-396-7378, pfrcustomerservice@toronto.ca

Nathaniel Erskine-Smith won another election handily in Beaches-East York in September, to no one’s surprise. He enjoys immense personal popularity in the riding owing to the fact that he’s blazed his own trail as an MP, sometimes even going against his own party. That usually doesn’t bode well for future political prospects, but it’s only a matter of time before higher-ups see Erskine-Smith like his constituents do.

The province’s first Tibetan-born MPP is part of a young core of rising NDP political stars from Toronto. First elected in 2018, the Parkdale-High Park MPP has served as deputy opposition whip and the NDP’s shadow minister in charge of mental health and early childhood learning. It’s her third time being named best MPP by NOW readers. It may still be too early to start thinking about her as leadership material, but who knows.

Longtime locals call it the Beaches. Others call it the Beach. Whatever your preference, it’s hard to beat Toronto’s playground by the lake straddling Queen East from Kingston to Vic Park. From its local history to lifestyle and proximity to downtown, it’s become one of the city’s – and country’s – most desirable neighbourhoods. Now if we can only keep the development pressure threatening to turn Queen East into condos-ville at bay….

The Beaches’ local source for community news distills it all in one weekly newsletter.

When John Howard donated his lands to the city in the late 1800s for the creation of a park, he was inspired by New York’s Central Park. While it never achieved that status – at least not internationally – at nearly 200 hectares in size, Toronto’s High Park is still recognized as one of the most significant urban green spaces in North America. It’s also one of the most important ecological preserves that’s enjoyed by Torontonians and visitors year round almost 150 years since its founding.

It’s hard not to take one look at the Sunnyside pavilion and be catapulted back in time to a Monet-like scene of its 1920s heyday, with women in one-piece bathing suits and swim caps and men in handlebar moustaches lollygagging the day away by the lake. Ah, if only we could be there too. Back then there was no pool and the pavilion acted as change rooms for the beach. But after two summers of especially cold temps, a pool was constructed to go with the pavilion. Toronto has been in the swim ever since.

A federal government plan to revitalize Toronto’s waterfront was born in the 1980s as development along the water’s edge slowly choked off access to the lake. Harbourfront was designed as a destination, but few could know back then that it would mark the beginning of revitalization of the lake shore. The addition of beaches, trails and other pedestrian-friendly features has turned the area into a public space destination.

CBC Radio’s long-time early morning host has moved to a later time slot with The Current, but he remains at the top of his game as the voice of all things Toronto. Galloway embodies the city and, like the city itself, he’s nice to a fault and smart, but no pushover.

City Hall’s rink gets all the glory for its arches and unmistakably downtown feel, but there’s nothing like cutting some ice to the sounds of the city’s coolest DJs and the cold slap in the face from the wind off the lake at Harbourfront’s rink.

There’s been enough good works by BLM over the last half decade in Toronto to fill a book or two (see Best Activist Group category) but Toronto is nowhere near achieving social justice. There’s no end point in that struggle – at least, not in the foreseeable future. That will only be realized when groups like BLM are no longer needed.

Canada’s seventh oldest university is regularly ranked among the top universities and research centres in the country. The school is home to more than 90,000 students and more than 700 undergraduate and 200 graduate programs. U of T has positioned itself as a leader in climate action. In October, the school announced a plan to divest from fossil fuel companies in its $4 billion endowment fund in the short and long terms, and is working toward net-zero emissions.

To those familiar with it, this choice is a no-brainer. Occupying some 200 hectares from roughly the foot of Canoe Park to Eglinton, the Don Valley trail snakes through some of the best greenspaces, natural features and picnic areas in the city. There’s also art installations and things like frisbee golf and archery to do along the way, not to mention the wildlife. Take your bike to make a day of it.

Students for a Free Tibet Canada

The emphasis is on education for this national nonprofit youth group that has been bird-dogging human rights issues and abuses and energizing democracy efforts back home.