What is known so far about the circumstances surrounding Korchinski-Paquet’s death “suggests that there is a foundation for criminal liability,” although lawyers are not offering specifics 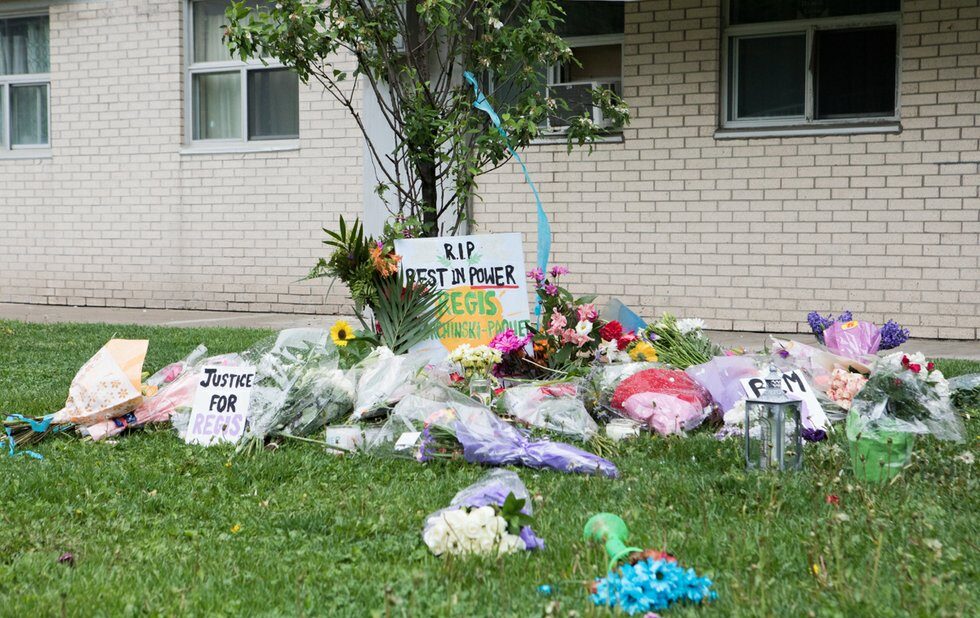 Makeshift memorial for Regis Korchinski-Paquet near the spot where she fell to her death from the 24th floor of a High Park Avenue apartment on May 27.

The family of Regis Korchinski-Paquet has recruited some high-powered help as the province’s Special Investigations Unit (SIU) wraps up its investigation into the woman’s fall from the 24th floor of a High Park Avenue apartment building back in May.

Howard Morton, a former Crown prosecutor who also served as SIU director during one of the police watchdog’s more tumultuous periods from 1992-1995, has been added to the family’s legal team led by Knia Singh.

Morton, who took part in a press conference Wednesday afternoon to announce a memorial for Korchinski-Paquet and bring the media up to date on the case, believes that what is known so far about the circumstances surrounding Korchinski-Paquet’s death “suggests that there is a foundation for criminal liability,” according to a statement released by Singh.

But Singh tells NOW in an interview that he’s not prepared to divulge specifics on that until the SIU completes its investigation and determines whether charges will be laid in the case.

“We want to ensure that there is going to be no claim that the integrity of the SIU investigation was compromised,” says Singh.

Six Toronto police officers were reportedly in an apartment at the High Park address when Korchinski-Paquet fell to her death. They were called by Korschinski-Paquet’s mother who said her daughter was in mental distress and wanted her taken to CAMH.

But accounts of what happened after police arrived diverge from there.

According to Chief Mark Saunders, police were responding to reports of a knife at the scene. According to the family, there was no knife when police arrived. Family members and Korchinski-Paquet were carrying on a conversation in the hallway with police when Korchinski-Paquet asked to go back into the apartment to use the bathroom. It was shortly after that family members say they heard a cry for help and then silence.

The coroner’s office has conducted an autopsy on the body ordered by the SIU, but the family has also had its own autopsy conducted out of province, the results of which Singh says are expected soon.

Singh says the family decided on a second autopsy “just for safety’s sake. We felt it was important to do a second one and compare the findings to see if there is anything else that should have been looked for.”

He says he’s willing to provide the results of the family’s autopsy to the SIU “unless the family instructs me not to.”

There has been much controversy surrounding the case, including questions about the SIU’s independence after details of the police version of events were leaked to the Toronto Sun.

In response, the family has requested it be kept informed of developments and evidence in the case. But Singh says the unit has declined to provide much information, including the names of the officers involved.

Singh says other requests for information have been denied, only to be released later.

The SIU has released a statement saying that the subject officer and five witness officers involved in the case have been “interviewed.”

But Singh says it’s unclear to what extent questioning took place. Or “Who at the SIU is ensuring that information being provided by police is accurate, true information?”

Singh says he knows from cases he’s handled in the past involving the SIU that “the information that the SIU provides in its reports can be very different than what police officers say when they get on the stand at trial.”

Singh admits to having little confidence in the SIU – “If the SIU clearance rate [for officers] wasn’t 95 per cent” – but says that the family will await the results of SIU investigation.

Joanne MacIsaac, whose brother Michael was shot and killed by Durham Regional police while experiencing a psychotic episode in 2013, has also offered assistance to the Korchinski-Paquet family. MacIsaac’s case forms part of a court challenge by Osgoode Hall’s Innocence Project aimed at making de-escalation training mandatory for new police recruits.