Toronto’s housing bubble has created a landlord’s market, to the disadvantage in particular of Black renters. 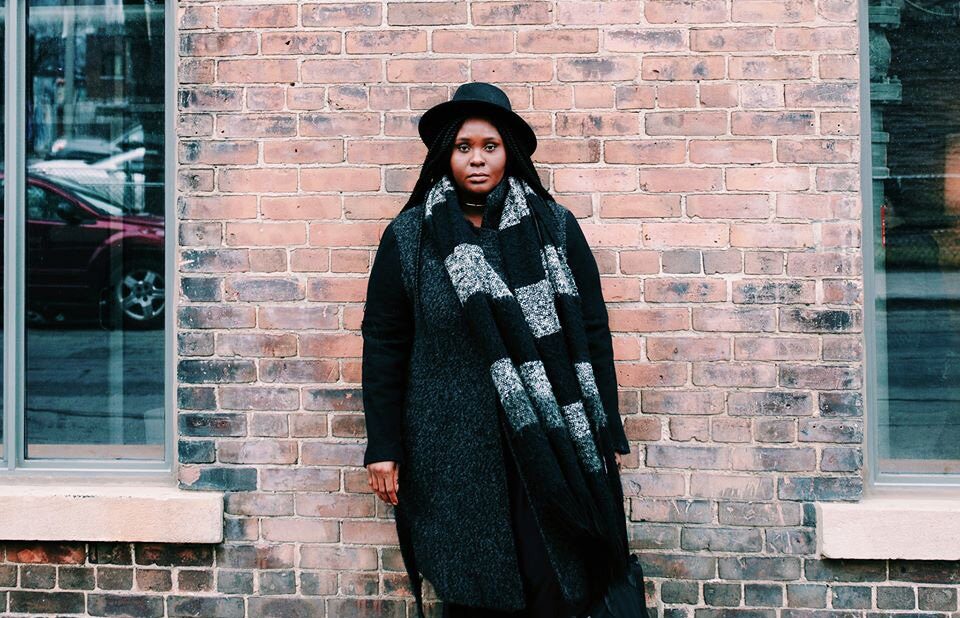 When Temi Marie, a 26-year-old professional of Nigerian descent, started looking for a new place to rent last September, she didn’t think that six months later she would still be without somewhere to live.

“I’ve been couch-surfing,” she says. “Now it’s reached a point where I’m pretty much homeless because I can’t find a place.”

Marie has encountered everything many would-be renters might expect in Toronto’s current climate: unreliable landlords, renters with cash winning out over renters who haven’t yet resorted to filling a duffle bag with first and last month’s rent, finding the perfect apartment online before realizing it’s already been rented.

But Marie, a woman of colour, has also had to navigate the “runaround” of thinly veiled discrimination, including requests for several interviews, being told a rent is higher after negotiating down the advertised price and even demands for a criminal background check.

Her experiences reveal the frustrating situation shared by racialized renters.

“There’s no question that being a woman of colour and trying to find a place in Toronto is not going to be easy,” Marie says with disturbing equanimity. “It’s not something that’s new [to me].”

Housing discrimination based on race is indeed nothing new. But Toronto’s housing bubble has created a landlord’s market, to the disadvantage in particular of Black and South Asian renters.

Case in point: a blatantly racist ad published on Kijiji in January advertising a vacant two-bedroom condo in Etobicoke: “Clean and tidy Etobicoke condo – NO BLACK TENANTS PLEASE!” It was quickly shared on social media to collective shock before it was removed from Kijiji.

According to Kijiji’s posting policies, ads that deny a person housing based on race, ethnic background or origin “will be removed from the site” and users blocked from using Kijiji’s services in future. But similar posts can be published on other platforms.

Another rental ad originally from Kijiji reappeared recently in the Bunz Home Zone, a popular housing group on Facebook, specifying the renter was looking for a “working caucasian [sic] person.” 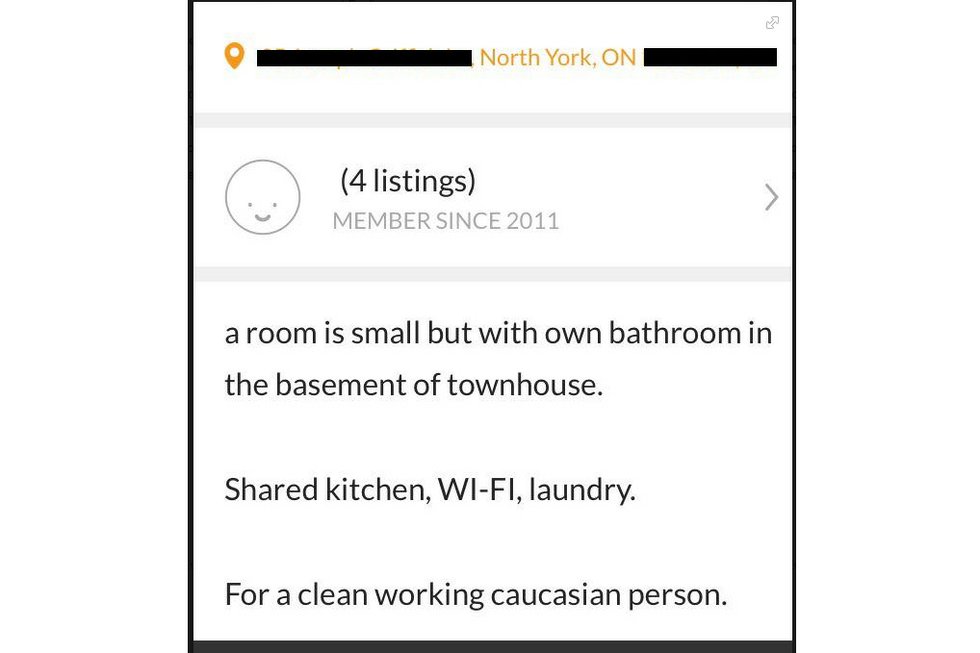 According to kijiji.ca, the poster had (at the time this screenshot was taken) four other listings and has been a member of the Kijiji community since 2011.

In 2009, a citywide telephone audit of Toronto landlords carried out by the Centre for Equality Rights in Accommodation (CERA), a non-profit that’s been promoting human rights in housing since the late 80s, found housing discrimination based on race to be a “significant” problem.

CERA’s report, Sorry, It’s Rented, found that Black single mothers and their children are the hardest hit. Nearly one in four Black single parents say they’ve experienced “severe discrimination” in their search for housing, “adding to the stress and effort associated with the housing search process, decreasing the pool of available rental housing, pushing individuals into overpriced and/or inadequate apartments – and potentially into homelessness,” according to the report.

CERA executive director Renee Griffin says racial discrimination continues to be a major barrier to housing more than 20 years after protections were written into the Ontario Human Rights Code.

“Race or place of origin are the top reasons why we get calls,” Griffin tells NOW.

Kentake, a Jamaican single mother with a young son who asked that we withhold her last name for privacy reasons, knows the feeling.

“I’ve been semi-homeless at least four or five times,” she says.

She is comfortable now in the Brampton neighbourhood she settled on after an arduous and ultimately unsuccessful search for decent affordable housing in Toronto. Landlords asked her for everything from a birth certificate to proof of legal status, as well as pointed questions about selling drugs and requiring her to sign an agreement stipulating “no male guests.”

“You call and they say things are available. Then you go and they’re not available,” she says.

Toronto real estate agent Horace Dockery says landlords will ask for a copy of ID with rental applications, which is supposed to be illegal, to filter tenants. He says owners who hire agents to rent accommodation sometimes ask them to discriminate.

“In certain areas [of the city] there’s a perception that Blacks are not very reliable.” And in a hot housing market, adds Dockery, “landlords can pick and choose because it’s no longer an economic decision.”

The province of Ontario is supposed to have some of the best legal protections against housing discrimination in Canada. Important protections fought for and won under the Ontario Human Rights Code in the 1990s prohibit discrimination on the grounds of race or ethnic origin. (See Breaking code below.)

But those protections are hard to enforce when racism can be subtle and it’s a renter’s word against a landlord’s.

Says Griffin, “It’s hidden, because landlords know it’s illegal [to discriminate] and contrary to the Code. We’ll often see ads that are discriminatory. You’ll read language like “professional people only’ or ‘suitable for couple’ that certainly are code for ‘we want people who are working’ or ‘we don’t want children.’

“The difficult piece is that a lot of these go unreported. We know it’s happening much more than people are telling us. Folks who are living in poverty are facing a number of additional challenges. They may be not only be trying to figure out where they’re going to live, but how they’re going to pay for their next meal.”

Investigations on discrimination in rental housing accommodation in Canada reveal that individuals from Black and Indigenous communities in particular are subjected to prejudicial treatment.

There’s been an increase in discrimination against persons identified as Muslim, Arab and South Asian since 9/11, and Islamophobia is on the rise, says the Ontario Human Rights Commission.

While research in Canada has not been as extensive as in the United States, similar themes have emerged. For example, compared to whites, racialized tenants are less likely to get through and speak to a rental agent or be told of a unit’s availability, but more likely to be charged application fees (e.g., “key money”) or to have credit ratings cited as a problem in qualifying for a lease.

The Ontario Human Rights Commission notes that a “significant” number of instances of housing discrimination go unreported because they involve “non-status” Canadians who fear reprisal if they report mistreatment.

As of June 2008, all discrimination claims are filed directly with the Human Rights Tribunal of Ontario.