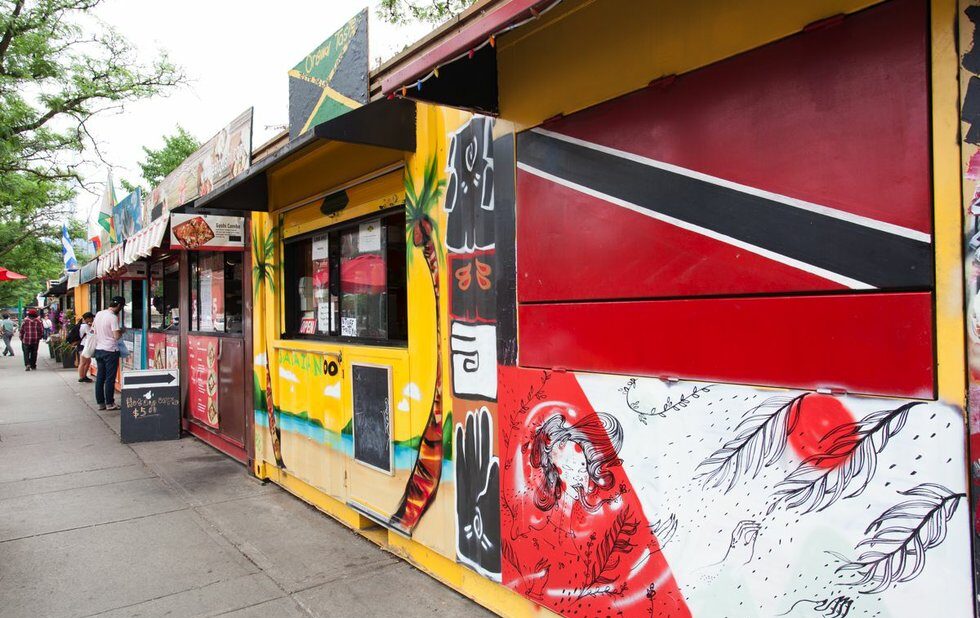 Seven years ago, Bathurst and Dundas was a void compared to the charming chaos of nearby Chinatown and Kensington Market. Then Market 707 popped up.

The street food and retail market has brought the space to life, attracting people from different parts of the city while bringing revenue into the community.

And it all began with a couple of repurposed shipping containers, the latest affordable space trend in architecture and planning circles known as “pop-up infrastructure.”

Now, a number of Toronto community groups are hoping to partner with private and public landowners in hopes of creating affordable community and entrepreneur space in three inner-suburb communities: Humber Summit, Woburn and Mount Dennis, Neighbourhood Improvement Areas (NIAs) dominated by tower housing and with poor access to services.

Delta Family Resource Centre has partnered with Social Planning Toronto (SPT) and Weston-Mount Dennis’ Action for Neighbourhood Change (ANC) for the projects. A committee including representatives from the city, Toronto Community Housing, the African Canadian Heritage Association, Scarborough Arts Council, and Urban Priorities (a consultancy hired to complete a feasibility study), has been set up to steer the projects.

Cutty Duncan, a community organizer with SPT says, “We want to redefine how communities are able to fend for themselves and make space available to fulfill needs in the community.” Pop-up infrastructure “allows communities to become developers,” he says.

Delta and SPT recently shared the results of their efforts at a symposium in Toronto, and while they’re promising, community groups say we need systemic change to make using pop-up infrastructure easier – we’re not just behind other cities, we’re a decade behind other countries.

An estimated 24 million shipping containers are rusting away, unused, around the world. Besides the environmental benefit to building with them, shipping containers are modular, stackable and adaptable. They’ve been converted into everything from computer labs in South Africa to a temporary kindergarten classroom in Slovenia. They provide temporary student housing in Amsterdam and social housing in Vancouver.

Structures can even be disassembled, moved and reassembled, whether by choice, as for a travelling art gallery in Norway, or out of necessity, as for community centres in migrant slums in China.

The structures reduce construction time, a boon for community groups needing a “quick win to build momentum and enthusiasm in neighbourhoods,” says Olga Semenovych, the planning consultant for the Delta and SPT project.

And they’re cheap, around $2,000. After that, says Andrew Lockwood from Giant Container Services, the supplier for future Delta–SPT builds, containers cost a fraction of a traditional new build – $20-$180 per square foot (depending on how kitted out containers are) versus $150-$250 per square foot for other commercial construction.

Council’s recent move to consider a less onerous approval process is piquing interest in containers as a construction option for laneway housing. A home expansion with containers  currently underway off Graffiti Alley is Toronto’s first residential use.

One recent community/public partnership may have set a precedent for pop-up infrastructure that serves the community on Toronto District School Board (TDSB) land.

It took several years, but St. Alban’s Boys and Girls Club, working with Action for Neighbourhood Change-Mount Dennis moved its Weston-Mount Dennis programming from whatever space it could find in schools and Toronto Community Housing buildings to an underused parking lot in front of York Humber High School.

Duncan, who coordinates the project for SPT, says they got the land by finding a “sweet spot.”

“We thought the best way was to build things that feel and look permanent to the community, but as far as the school board is concerned can be removed,” Duncan says. An office portable – another modular, moveable building type – met those criteria.

TDSB has a permit system for community use of school spaces, but this arrangement was a first, Duncan says.

“I think they wanted to be careful. When you talk about space, there might be some people in the school board who are happy to see, as a way to raise revenues, turning that into development space,” he says.

Ultimately, the board worked with the community and provided not only the space but in-kind support (including paying for site planning and the environmental assessment) that was instrumental to moving the project forward.

The project recently passed a second important hurdle, as TDSB amended its agreement to allow it to expand on the site. With three more portables, St. Alban’s will become an open-concept, 2,400-square-foot youth centre with a five-year lease, allowing more regular programming in an underserved community.

Other community groups are making inroads with Toronto Community Housing.

When Building Roots co-founders Lisa Kates and Darcy Higgins wanted to bring fresh, affordable produce to Moss Park (a need residents identified), they approached TCH, which leased them space free for the first two years, in a corner of a parking lot at its Queen and Seaton apartments. TCH even pays for hydro.

TCH is also exploring pop-up infrastructure as a quick way of engaging the communities involved in its “ReSet” capital repairs program.

The implications of such successes are broader. Duncan says shifting how community groups access land and how they are allowed to build on these spaces, first in the three NIAs but eventually across the city, could make affordable and social housing an option for them.

“If we were able to get the school board, the city and TCH – the three big landowners – really get them to shift their framework of how they work with communities, we’ll be able to do the heavy lifting,” he says.

However, regulation-wise pop-up infrastructure is considered permanent, at least in Toronto. Anything that applies to brick-and-mortar building – permits, zoning, building codes – must be adhered to.

“Permits and approvals are the longest part of a project because they’re treated on an ad hoc basis,” Semenovych says. Unless you find “the right person at the city to help,” success often depends on chance.

“We put [the containers] down first,” Vaughan says. “As complaints came in I told the civil servants, ‘Don’t tell me what the problem is, tell me what the fix is.’ ” Each department – Public Health, Parks and Rec, Public Works, Licensing, Planning – came back with a workaround, allowing the pop-up to stay.

“The City doesn’t really have any policies regarding containers. A lot is left for interpretation by that [one] person in each division involved,” says Scadding Court Community Centre executive director Kevin Lee. “If you don’t have a councillor with vision and leadership, you’re out in left field.”

Such bureaucratic inconsistency means “the city is missing out on a huge opportunity,” Lee says, like revenues from taxes entrepreneurs would pay, and the economic and social dividends to communities.

Vaughan proposes community organizations pursue a “five-point plan for regulatory ease”: a standardized business licence adjusted “as-of-right” zoning recognition of containers’ structural and foundational integrity in the Building Code a template lease for containers on city-owned land (drafted by the city’s legal department) and staff from across divisions brought together and up to speed.

Delta and SPT have applied for another round of Trillium funding to host community forums this fall to share what they’ve learned about implementing pop-up infrastructure. The funds would also be used to lead by example, putting up a structure in one or two of the three NIAs.

Meanwhile, says Duncan, “Organizations are knocking at the door and asking ‘How can we do this?’ ”