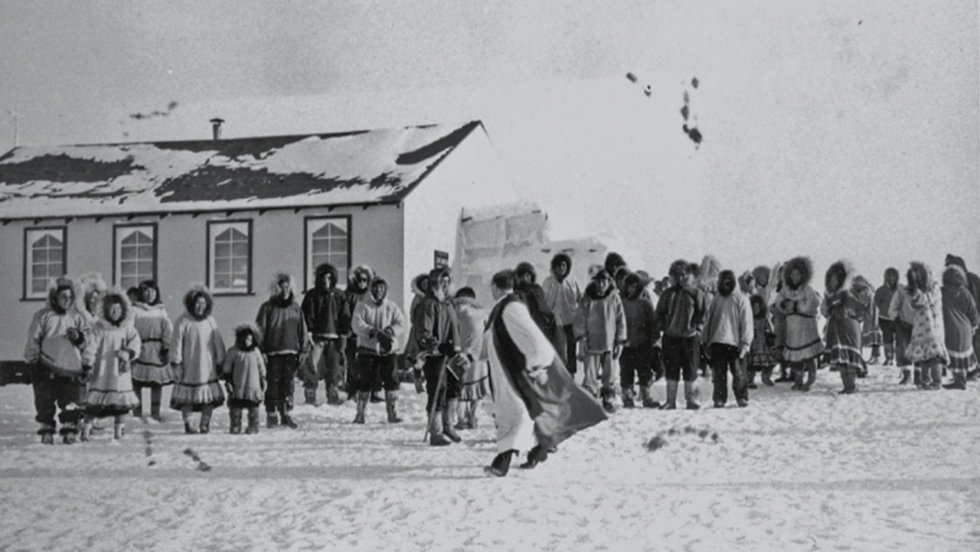 One of the most northerly residential schools was at Coppermine in the Northwest Territories. General Synod Archives

Frederick Ernest Koe, of Aklavik, Northwest Territories, remembers the knock on his parents’ door and the Anglican minister and RCMP officers there to take him away to school.

“They’re asking for me and telling me to pack up because I had to go. Well, [I] pack up a few little things – no suitcases, my hunting bag is still kind of dirty. [I] throw whatever stuff [I] had in it and go. I didn’t get to say goodbye to my dad or my brother Allan, didn’t get to pet my dogs or nothing. [We] marched over to… the plane – just like criminals, you know, marching with this policeman to get on the plane. It was pretty monumental point in my life, very dramatic, I guess. You don’t realize this until after, because those times, you just did what the people in charge told you to do.”

She describes “seeing the cattle trucks come onto the reserve and scoop up the kids, and seeing my cousins cry – they were put on these trucks and hauled off, and we didn’t know where – and my grandmother and mother hiding us under the bed.”

Howard Stacy Jones was taken from a public school in Port Renfrew, BC, to the Kuper Island residential school without his parents’ knowledge.

“I was kidnapped when I was around six years old, and this happened right in the schoolyard. My auntie and another witnessed this…, saw me fighting, trying to get away from the two RCMP officers that threw me in the back seat of the car and drove away with me. My mom didn’t know where I was for three days.”

Larry Beardy remembers the long train trip from Churchill, Manitoba, to the Anglican residential school in Dauphin, some 1,200 kilometres away.

“It was one whole day of travel on the train to Dauphin. When we boarded the train, I was very excited. It’s like going on a journey. I was going with my sister and my other older siblings. The train ride was okay for the first half hour or so, then I realized… my mother was not there. At every stop, children [would] get on the train, and then there’d be more crying, and everybody started crying, all the way to Dauphin. That’s how it was. A lot of tears.”

Florence Horassi was taken to the Fort Providence, NWT, school in a small airplane that stopped at other small communities on the way to pick up children. She and her brother were separated once they reached the school.

“When we got to Providence, there was nuns waiting for us on the shore, brothers, fathers, priests. [My brother] was scared, so he grabbed hold of my hand. We don’t have no luggage, or no clothes, just what we had on. And we walk up to the top of the hill, and my brother… was just holding onto my hand so tight. And then the priest came, and he told me he’s got to go this way, and then the sister came over to me, told me you got to go this way, but he wouldn’t let go of my hand. They broke our hands apart like that.”

When his grandfather died in 1946, Campbell Papequash was taken by missionaries to residential school.

“I was taken into this big building that would become the fear of life. I looked around this big, huge building, and I see all these crosses all over the walls. I look at those crosses and I see a man hanging on that cross and I didn’t recognize who this man was. And then I was taken to the infirmary, and there, you know, I was stripped of my clothes, the clothes that I came to residential school with, my moccasins. I didn’t know what was happening, but I learned later that they were delousing me. I was shaved, bald-headed.”

Antonette White says students at Kuper Island school were forced to look at a suicide victim.

“I remember the one young fellow that hung himself in the gym, and they brought us in there and showed… showed us, as kids, and they just left him hanging there, and, like, what was that supposed to teach us? I’m 55 years old and I still remember that.”

Elaine Durocher said she learned the tools for a life in the sex trade at residential school.

“They were there to discipline you, teach you, beat you, rape you, molest you, but I never got an education. I knew how to run. I knew how to manipulate. Once I knew that I could get money for touching, and this may sound bad, but once I knew that I could touch a man’s penis for candy, that set the pace for when I was a teenager and I could pull tricks as a prostitute. That’s what the residential school taught me. It taught me how to lie, how to manipulate, how to exchange sexual favours for cash, meals, whatever the case may be.”