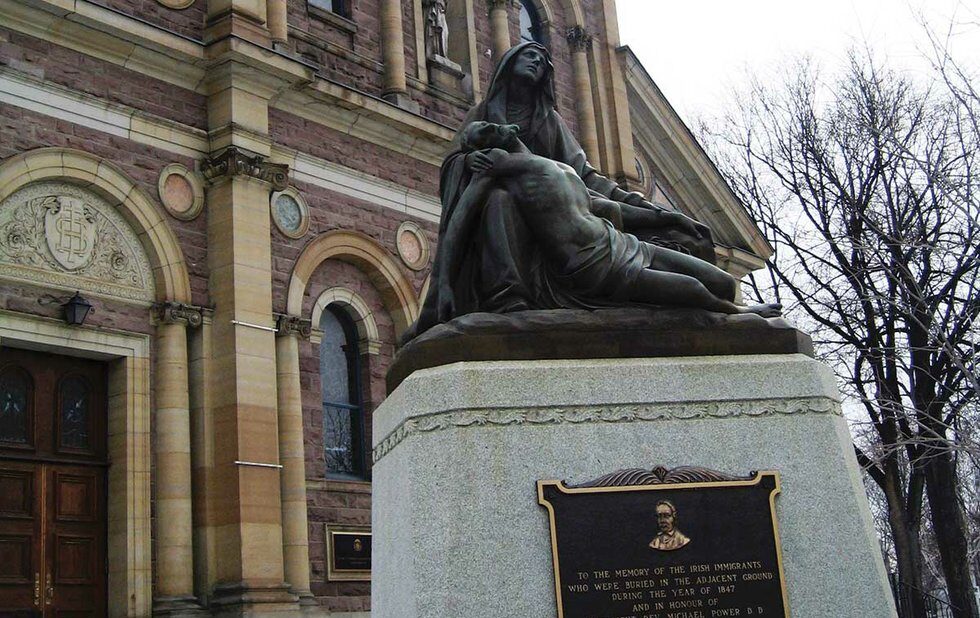 On Queen one block east of Parliament, under a playground beside St. Paul’s Basilica, there’s a mass grave. Some 800 migrants escaping the Irish Famine were buried here, victims of a typhus epidemic in 1847. The cemetery that once occupied the site was closed in 1857, the tombstones destroyed. Now this mass grave is complicating school expansion plans.

While thousands took part in St. Patrick’s Day celebrations around Toronto on Friday, March 17, it wasn’t that long ago that the parade was outlawed after rioting got out of hand in 1878. It took 110 years, till 1988, for March 17 festivities to be allowed here again.

Ireland’s Great Famine (or An Gorta Mór – the Great Hunger) caused the deaths of a million people from disease and starvation between 1845 and 1852. Another two million joined a mass exodus. Ireland’s population fell by 20 to 25 per cent.

During the incredible summer of 1847, the population of Toronto tripled when close to 40,000 Irish famine refugees arrived on the waterfront between June and October, most of them sick and destitute. The city’s population at the time was barely 20,000.

Dubbed the “year of the Irish,” that crisis was one of the greatest human challenges in our history. The refugees were greeted with some open hostility but also with sympathy. Toronto’s public health and social services infrastructure came of age in response to the emergency.

There was a significant Irish presence in Canada before the famine, but most of those earlier migrants had been Protestant – deemed to be loyal to Britain and thus more easily absorbed by the fledgling colony. The newer refugees were mostly Catholic, and soon encountered the same prejudice and discrimination they had faced back home.

That’s a piece of Toronto’s history worth remembering at a time when the world is facing a refugee crisis and some people want to build walls and strengthen borders.

According to a column in the Toronto Globe, “Irish beggars are to be met everywhere, and they are ignorant and vicious as they are poor. They are lazy, improvident and unthankful they fill our poorhouses and our prisons.”

During the same period, African Americans, many of them fugitive slaves, were also arriving in Toronto. Irish, Blacks, Jews and ChineseN mingled and lived together in the Ward, the densely packed area in the centre of Toronto that welcomed successive waves of newcomers.

These immigrant areas were descried in the Globe as full of “miserable hovels which in themselves are better fitted for pig-styes and cow-pens than residences for human beings.”

An emboldened Orange Order, the fraternal order of Irish Protestants, came to dominate Toronto politics for almost a century after the arrival of the famine refugees. The Order’s militant Protestantism and loyalty to Empire led to violence against the recent arrivals, earning Toronto the nickname “the Belfast of Canada.”

Many Irish Catholics here and in the U.S. supported the cause of Irish independence from England. Orangemen and Catholics battled annually in the streets both on the Twelfth of July – a bizarre triumphalist commemoration of the Battle of the Boyne, the 1690 victory of William of Orange over the Catholic James II – and St. Patrick’s Day.

Rioting got particularly ugly in 1878 in what would be called “one of the wildest nights in the city’s history.” St. Patrick’s Day processions were then outlawed, but not the Twelfth of July.

By 1988, when the parade was re-instated, the Irish had been assimilated, and sectarian tensions were a thing of the past. St. Patrick’s Day had become commercialized, and few remembered the story of the Apostle of Ireland, who was himself one of the first recorded immigrants and refugees to Ireland.

As a city that proudly celebrates its diversity, we aren’t that good at collectively remembering our history, or celebrating the successive waves of humanity that have contributed to this city’s uniqueness. If we were, perhaps the Queen East gravesite and the events leading to the remarkable “year of the Irish” would be more widely known. Toronto is now officially a Sanctuary City. It’s up to all of us to ensure that that policy has real meaning by actively resisting the politics of hate, fear and division.

Ken Theobald’s maternal great-great-grandparents and their four children were among the Irish famine refugees who landed in Toronto.