Sex workers are feeling effects of Trump ban, too

I am not Muslim, nor have I ever been. I have, however, been a sex worker and I, too, am not allowed into the United States. 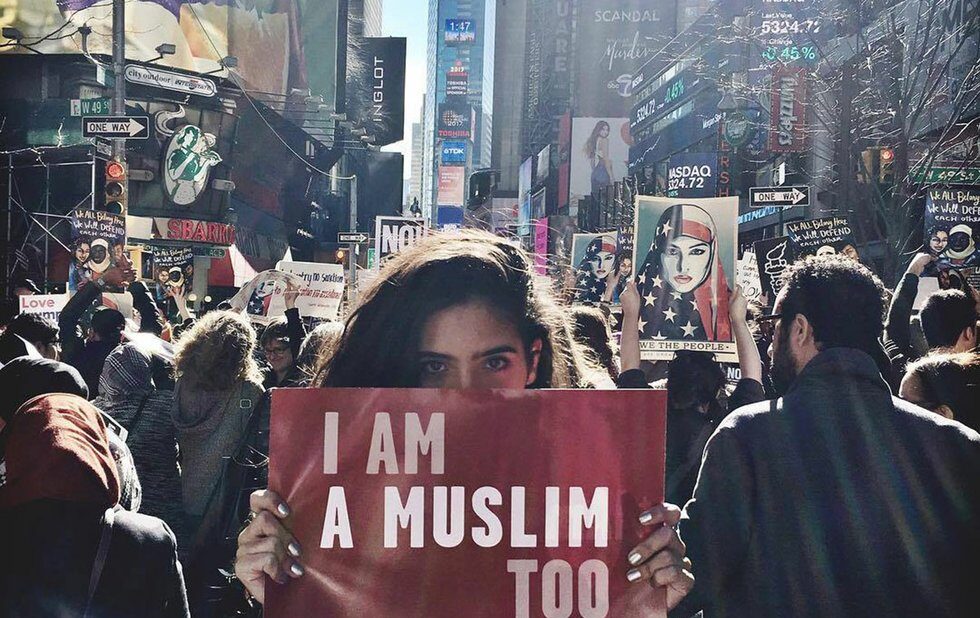 I can’t help it. I find the idea of people tasked with clumsily fabricating and decrypting hooker code darkly comical. You can almost feel the boners, rising like little tent poles against battle-ready khaki, prodding and poking and judging.

About a week earlier, people gathered in Times Square, galvanized by Def Jam cofounder Russell Simmons, to attend the #IAmMuslimToo rally. The intention was beautiful – people from all racial, social and religious backgrounds showing support for a community demonized by yet another unrestrained narcissist with too much power in the White House. Still, this also feels stilted.

You are not a Muslim for good because you held up a placard on a sunny afternoon in New York City. You can take a sign off and go back to work. It’s like dressing as a hooker on Halloween you can still enjoy the social privilege of not being a truly stigmatized person.

I am not a Muslim, nor have I ever been one. However, I am, and have been on and off since 1992, a sex worker. And I, too, am not allowed in the United States. This has been American law for over a century, but it’s been enforced with greater zeal recently. Over the years, friends of mine in the industry have suffered the same treatment Muslims have of late: called out, zip-tied and paraded through airports, asked questions about their integrity and then banned. Banned for five years, banned for 10 years, accused of moral turpitude.

Whores are often the first to feel the effects of exclusion. We have a lot of insight into this. We have been sharing our stories on social media and on message boards. What happened to the young Canadian bride-to-be of Indian descent from Montreal who was turned away from the U.S. border a few weeks ago on her way to a spa with her girlfriends, presumably because she didn’t have the proper visa, happens to sex workers every day.

My choice, after being warned through my networks, has been not to try to cross the border. That’s not because I’m ashamed to be a sex worker. I show my face in my ads (which I do because I’m almost 50 and feel pressed to show I’m still attractive to prospective clients). I use this pseudonym when I write to provide myself a modicum of privacy so I can cover delicate issues. In this industry, drawing the ire of people who hold power is dangerous. As a young woman, I experienced various oppressive interactions, both in and outside the sex trade but almost always around or because of it. Frankly, after 25 years in the business, I prefer to avoid such exchanges, which are really just demonstrations of power. I get it: you own me.

I’m not all that fussed that I can’t go to the States, a country simultaneously obsessed with and terrified by expressions of sex that diverge from fundamentalist Christianity.

The book Ravensbrück, about Hitler’s concentration camp for women, where thousands of prostitutes died, tells us about the Nazi construct and criminalization of Rassenschande (race shame), the crime of infecting German blood. This passage from the book describes an event that is becoming more familiar all the time: “The interrogator wants to hear more, and now asks what happened and how it happened. ‘Was it full sexual intercourse? Was he inside you? Was he right inside you?'” A Toronto sex worker recently barred from the U.S. was subjected to the same barrage of salacious questions. How many cocks had she had inside her? Since when? The agents were so preoccupied with these penetrative acts, it’s as though they had a Sex-schande ledger that stated with certainty that this many cocks was the number of cocks that proved she was a danger to national security.

Sex workers are aware that unless we write them ourselves, there will never be concerned and respectful articles detailing our experiences. Who but sex workers will organize #IAmAWhoreToo demonstrations?

We have long been the unwilling adversaries of volatile and frightened gatekeepers who decode and misinterpret language that is then used as evidence of our duplicity. However these bans happen, there is more than an element of nonconsensual sadism at the heart of them.