Television-shunning artists to shell out for nascent MTV reality star 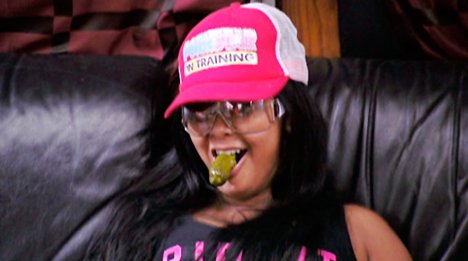 Snooki with a pickle in her mouth.

Snooki with a pickle in her mouth.

Nicole “Snooki” Polizzi, the self-described “Guidette” many of us saw getting punched out in the promos for episode two of MTV’s controversial reality program Jersey Shore (before the network pulled the offending clip, of course), may be partying it up in Toronto soon.

This thanks to – what else – a Facebook group started by Laura-Louise Tobin called “Snooki’s a Bargain” – Let’s bring her to Toronto, which seeks to pool funds of members to raise Snooki’s $2,000 appearance fee (+ $500 for transportation).

Bringing reality celebrities to town is more frequent than you might think. But Snooki’s planned appearance is a shade different. It’s part wink-and-nod and part art project, as Tobin explains.

Why are you trying to bring Snooki to Toronto?

I have been pretty obsessed with Jersey Shore since I saw it – after episode 2 – and I’ve been reading blogs or whatever. There was one post that was all about their appearance fees and like, The Situation and Pauly D are apparently charging $7500. But it said Snooki only wants two grand. And that sounded like “whoa, we can totally do that,” ya know?

So I started doing the math and I’m like, “I think it is entirely possible.” I’d be really really proud of myself if I actually did, and it would probably renew my faith in the Internet not being full of shit.

The first day we had like 30 people each pledging between $20 and $50 to get her in. So I think now were about over halfway to $2500 which is what I think we’re going to end up paying her.

What are your plans for when she gets here?

East Side Mario’s? Maybe some laser bowling? I dunno. I’m thinking maybe 100 – 200 people are going to be necessary to make this thing happen – so maybe just some sort of hilarious dance party.

That’s exactly it. My skivy writer and artist friends are totally obsessed with it. And it might be really fun to just get Snooki out to some random Toronto arty thing.

Most of my friends don’t have televisions and we don’t watch reality TV. We don’t watch TV period, pretty much. But Jersey Shore is really uniting people. It’s something special. It’s just a bunch of people who are ridiculous and proud of their ridiculousness having fun. You know, the one cranky troublemaker, left of her own volition after the second show. So now they’re just partying and having fun. And they know they’re ridiculous.

So you’re not a so-called Guidette?

Oh gosh no. I’m the palest Ukrainian-Irish nerdy blonde with glasses and a ponytail. They would probably get really freaked out by me. Talk about Star Trek or something.

I never heard the term before the show. I was sort of moderately horrified when I saw the first episode – but love it now, ya know? People should be proud of who they are.

I do live down the street from Little Italy and I think I identify with the people I pass on the sidewalk on Saturday night a bit more. So ya, it’s kind of like every time I walk down College Street pretty much I think that the Guidos and Guidettes here have a very strong identity. That’s only what I’ve heard from people who are Italian-whatever.[rssbreak]