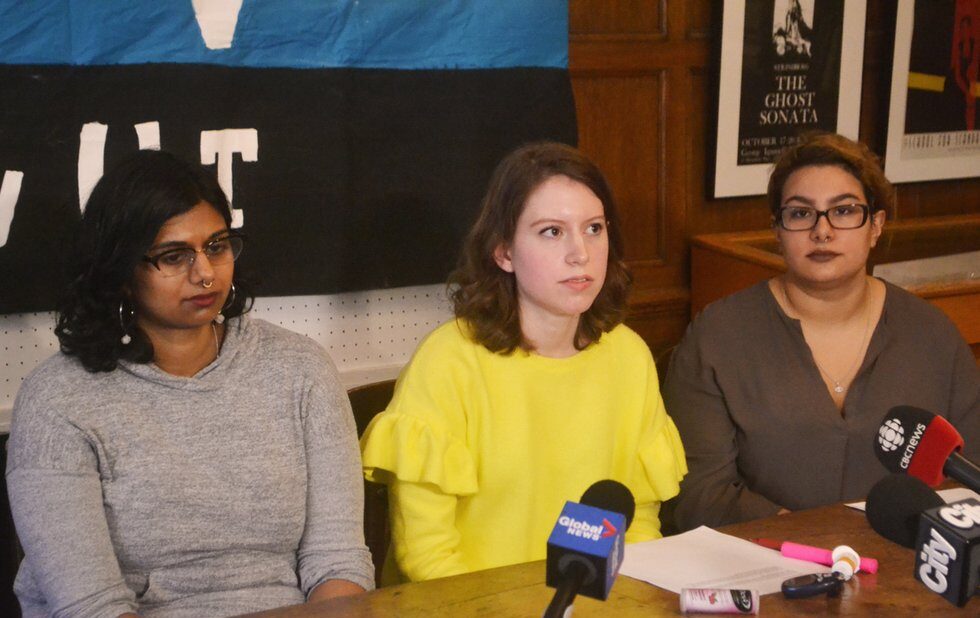 Tamsyn Riddle and Mira El Hussein|Posters from the Survivors Speak Back campaign displayed on a table in Trinity College.

After University of Toronto student Tamsyn Riddle went to the school officials to report that she was sexually assaulted in 2015, she says she quickly discovered that the odds of finding justice were stacked against her.

“My college told me not to report to police because I would be disappointed,” she says.

Riddle says university administrators assured her that reports were taken “very seriously” – but she spent the following seven months either running into her rapist or fearing she might. Finally, the university took action, banning him from Frosh activities or eating in the students’ shared dining hall. According to Riddle, administrators told her that expulsion was a consequence reserved for “serial rapists.”

Now, the 20-year-old is a co-organizer of Silence is Violence (SiV), a group led by survivors who want to change the way people and institutions respond to reports of sexual assault. Riddle announced at a press conference Wednesday morning that she was filing a human rights claim against the university for “systemic discrimination as both a woman and a survivor of sexual violence.” Her claim alleges the university was negligent by taking so long to act. In December of 2016, a similar human rights complaint filed by PhD student Mandi Gray against York University was settled without either side conceding.

The setting for the press conference – U of T’s Trinity College – has significance for her. She says the incident happened during that college’s outdoor quad party two years ago.

“I can’t even imagine my experience at U of T without what happened to me,” Riddle says. “I have often thought about the decision I made that night: the decision to go to quad party, the decision to drink as much as I did and the decision to take [the perpetrator] up on his invitation [to drink in his dorm room].

Terry McQuaid, U o f T’s executive director of personal safety, high risk and sexual violence prevention and support, says she can’t speak to how the university has dealt with sexual assault reports in the past. But she says the introduction of the university’s new sexual assault policy, required of all universities and colleges under Bill 132, has created an improved climate for survivors.

According to an investigation carried out by the CBC early last year, the number of sexual assaults reported to Universities and Colleges across Canada were troublingly low. While 57 assaults were reported to Ryerson – which the report notes has a “full-time student population of almost 24,000” – between 2009 and 2013, during this same period, only 34 reports of sexual assault were reported to the U of T with a full-time student population of 75,800.

“Canadian colleges and universities have a vested interest in not responding to complaints of sexual violence and to actively keep the number of formal reports low,” says Ellie Ade Kur, founder of the University of Toronto’s SiV chapter. “Formal reports of sexual assault tarnishes the reputation of the university, discourages enrollment at the university and targets donors and donor funding – which is something that the University of Toronto relies a lot on.” 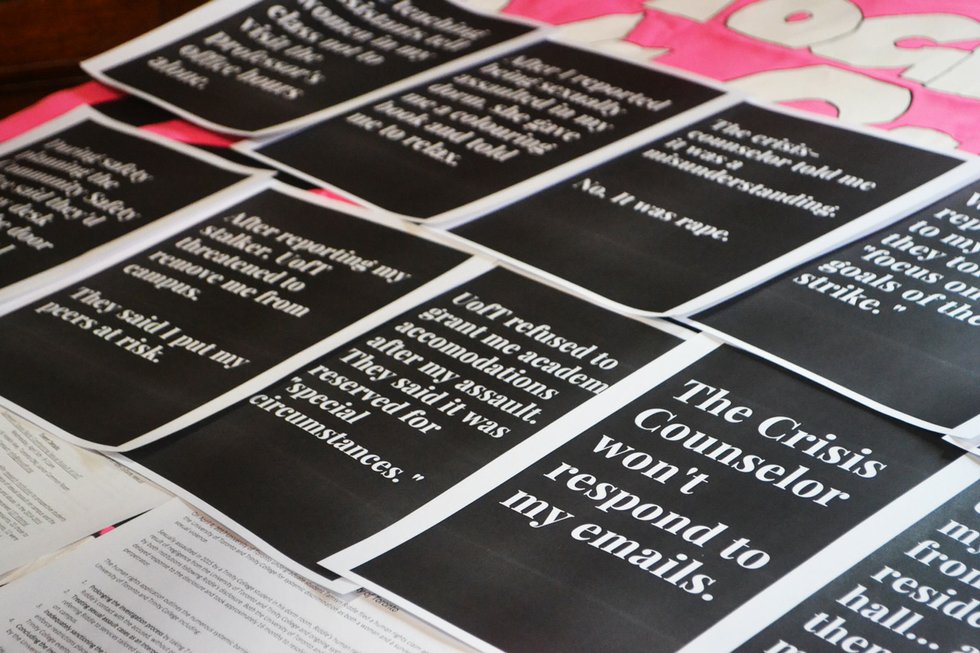 Posters from the Survivors Speak Back campaign displayed on a table in Trinity College.

The stories she’s heard from students trying to move forward with reports of assault inspired SiV’s viral Survivors Speak Back postering campaign. Over a three-hour period, organizers plastered thousands of posters depicting testimony of survivors in large white font against a black background across campus. Within hours, they had been removed.

Elizabeth Church, a spokesperson for the University of Toronto, says custodial staff removed the posters because they were in violation of U of T’s postering guidelines.

Since its formal inception a year ago, SiV has offered support services and programs for survivors. Including crisis intervention, peer support, yoga classes and legal advocacy.

“We’ve had to take on a lot of the work and providing a lot of the resources people at the university are paid hundreds of thousands of dollars to do,” said Ade Kur.

“That speaks volumes to how the university of Toronto thinks about dealing with sexual violence.”