During a packed town hall meeting, Sistering announced they're forming a community council to bridge the gap between the drop-in centre and the neighbourhood 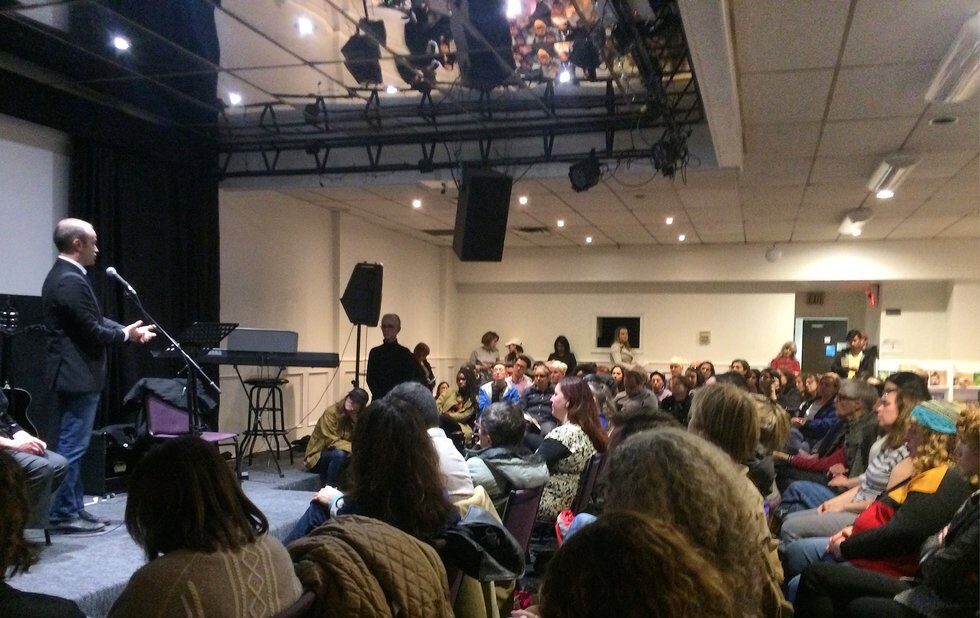 Around 180 local residents, business owners, politicians and activists packed Central Church on November 2 to share support and concerns regarding Sistering, the 24-hour women’s drop-in centre at Bloor and Dovercourt.

At Sistering’s first-ever town hall meeting, moderator councillor Mike Layton opened the discussion by clarifying that the agency was under no threat of closure, which was rumored as news of the town hall spread. Rather, the meeting’s purpose was to discuss how Sistering could serve its participants and the community better.

Since opening in 1981 at Dundas and Bathurst, growing to an outreach program in Parkdale and then expanding to its current location on Bloor West, the multi-service agency has served a diverse group of women aged 16 to 80 who are homeless or have precarious living situations.

The town hall comes two years after Sistering started its 24-hour program, one of only a few 24/7 women-only drop-in centres in the city. The new hours mean around 60 women are able to stay overnight, every night, but they also bring new challenges to the Bloorcourt neighbourhood.

While nearly every speaker expressed their support for Sistering, one attendee said they had noticed an uptick in women who appear to be in distress in the past two years in the neighbourhood, as well as an increase in drugs and paraphernalia. Another attendee noted that some business owners often don’t know what to do when Sistering participants become aggressive and disrupt their patrons.

Charlotte Empey, the community liaison for Sistering, said that while she does receive complaints from neighbouring businesses, it’s mostly about asking for advice on how to best support the organization and the women.

“Nobody from the BIA has said to me, ‘We want you gone,’” said Empey. “Businesses want to earn a living, residents want to feel safe and secure, participants need to be treated with respect, so how do we do this?”

Sistering staff believe the answer is forming a community advisory council to bridge the gap between the organization and the neighbourhood. The council will include local residents, business owners, Sistering staff and women who use the agency.

“[With the council], the residents and businesses will be able to see the participants as three-dimensional human beings, not statistics,” says Empey. “And [it will allow] participants to engage with the community so they feel some ownership in the space in which they spend so much of their time.”

Sistering is currently looking for volunteers to sit on the council and Empey says they hope to have their first meeting before the end of the year.