The SNC-Lavalin affair: Was it really about saving jobs, or just partisan politics?

Opinion: Even if his sole motivation had been to protect jobs, there is no possible explanation that would render the Prime Minister's conduct legal 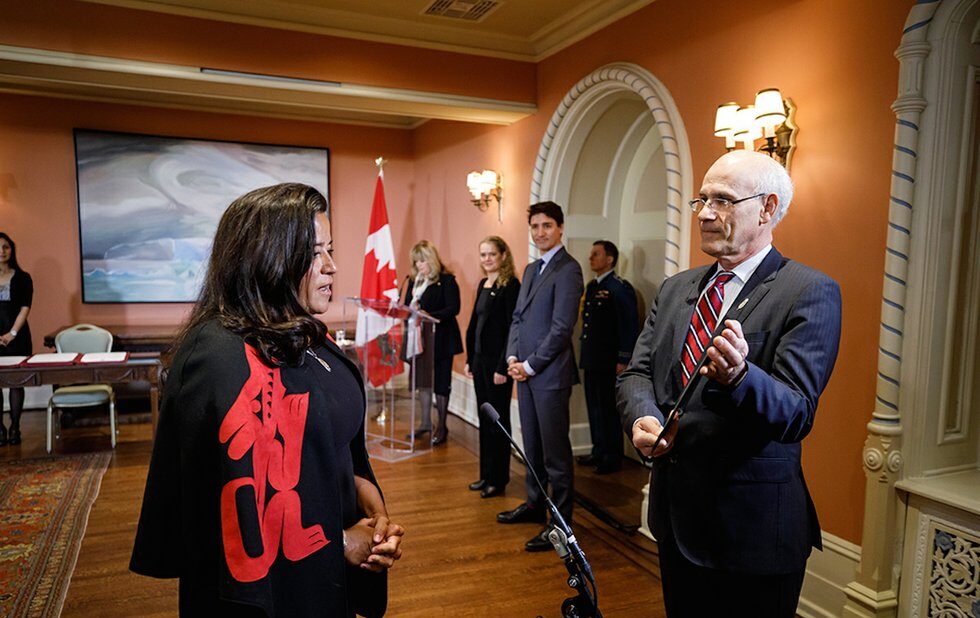 Jody Wilson-Raybould (left), has said that the prime minister brought up the Quebec elections during a meeting in his office to discuss the SNC-Lavalin file with Clerk of the Privy Council Michael Wernick (right).

Much of the debate surrounding the Trudeau government’s extraordinary efforts to have bribery charges against Quebec-based engineering firm SNC-Lavalin “deferred” has focused on the question of whether the prime minister was motivated by partisan political interests.

Trudeau maintains he acted to preserve jobs and any suggestion that electoral considerations played a role in his office’s efforts is based on “misinterpretations” of the evidence tendered by the former Minister of Justice and Attorney General, Jody Wilson-Raybould, before the justice committee.

But even if Trudeau’s sole motivation had been to protect jobs, it is my opinion that the means he used were illegal.

SNC-Lavalin lobbied for a remediation agreement (sometimes called a deferred prosecution agreement, or DPA) to avoid trial on corruption charges related to the company’s dealings in Libya.

There are provisions in the Criminal Code that limit the use of such agreements with provisions specifying what factors prosecutors may and may not consider in deciding whether to offer such an agreement.

One factor prosecutors must consider is “whether the organization – or any of its representatives – was convicted of an offence or sanctioned by a regulatory body… for similar acts or omissions.”

SNC-Lavalin and its representatives have been convicted of many offences in many countries in addition to Libya. In 2013, the World Bank “debarred” the company and 115 of its affiliates from bidding on future contracts for 10 years over allegations of corruption related to projects in various countries – leading to headlines such as, “Canada Now Dominates World Bank Corruption List, Thanks To SNC-Lavalin.”

There are many other examples of unlawful conduct by SNC-Lavalin and its senior employees.

Any proper determination of whether it is appropriate to enter into a remediation agreement requires a detailed analysis of the facts and the law. The director of public prosecutions concluded that it was not proper to offer SNC-Lavalin such an agreement. Wilson-Raybould undertook a review that led to the same conclusion. Did Prime Minister Trudeau consider SNC-Lavalin’s other illegal activities?

It may be difficult to draw precise lines about what representations a prime minister may make to an attorney general concerning such a prosecution.

But there is little doubt that the Prime Minister’s Office crossed a line by continuing to raise the issue with the AG after she indicated that she had made her decision. It would have been illegal to repeatedly raise the issue so vigorously even if all that was said to the AG was, “Please re-consider your decision because it will lead to 9,000 employees losing their jobs.”

It is true that an AG can enter into a DPA at any time before trial, and if there was new evidence she might change her mind. In this case, however, there was no new evidence, just badgering about jobs.

It is clear that Trudeau was determined to prevent the prosecution. When asking the AG to review her decision did not work, the PMO tried to convince her to allow someone else to advise her on the matter.

There is no possible explanation that would render Trudeau’s conduct legal even if his motives had been completely laudable.

Moreover, the evidence strongly implies that concerns about the Quebec elections played at least some part in the PMO’s continuing pressure.

Wilson-Raybould testified that the PM brought up the Quebec election during her meeting with him and the Clerk of the Privy Council. She says the PM “jumped in, stressing there is an election in Quebec and that [the PM] is an MP from Quebec.”

The AG testified that she then asked Trudeau, “Are you politically interfering… with my decision as Attorney General?” She says the prime minister responded, “No. No. No. We just need to find a solution.”

Can it seriously be maintained that saying “We just need to find a solution” is not interfering?

The prime minister did find a solution: he removed Wilson-Raybould as Minister of Justice and attorney general and appointed a new attorney general who had “not made up his mind” about whether to pursue a remediation agreement.

Wilson-Raybould testified that in her opinion, there was no obstruction of justice, but she was being very generous in saying that her colleagues had done nothing illegal.

In my opinion, the conduct of the PM and others in his government amount to obstructing justice, breach of trust and counselling an offence. The RCMP should investigate. More evidence is accumulating everyday.

Peter Rosenthal is a recently-retired lawyer and adjunct professor of law and professor emeritus of mathematics at the University of Toronto.