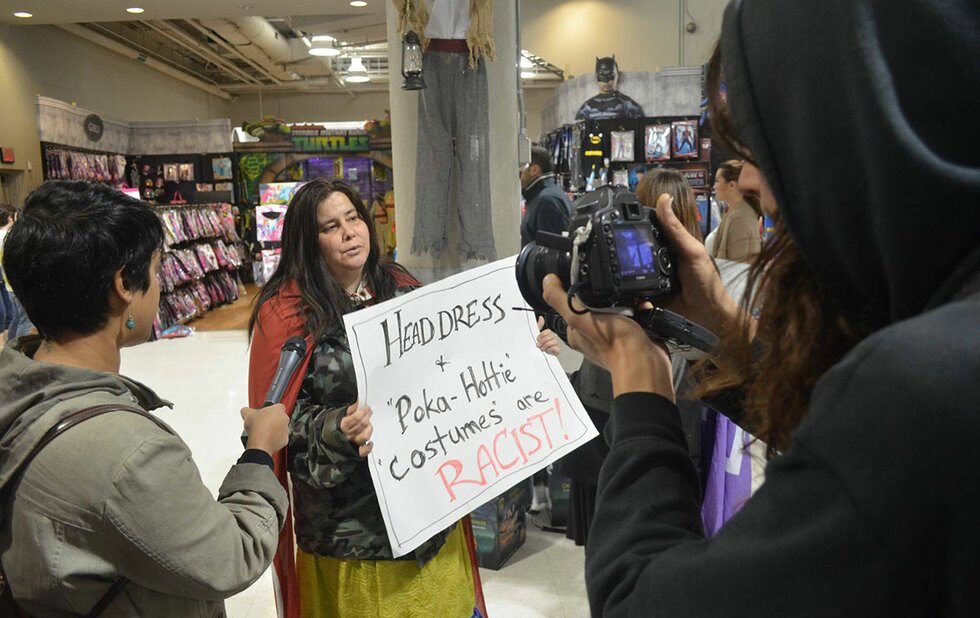 Yonge Street retailer Spirit Halloween has quietly settled a complaint filed with the Human Rights Tribunal of Ontario alleging some of its Aboriginal-themed costumes promote hyper-sexualized and racist views of Indigenous women.

The terms of the settlement over the complaint filed by Cathy Calfchild, Sigrid Kneve and Carrie Lester in 2016 against Spirit Halloween and its parent company, Spencer Gifts, are being kept confidential. But it appears at least the Canadian offshoot of the U.S.-based retailer of Halloween fare has agreed to remove the offending costumes from its Toronto stores, including costumes with names like Pocahottie, Reservation Royalty, Naughty Navajo and Huron Honey.

“With everything that’s going on, including the current Inquiry into Missing and Murdered Indigenous Women and Girls… they think we’re just talking about costumes [but] we’ve had to deal with so much loss,” says Calfchild, who first spotted the costumes in the aisles of the Yonge store four years ago.

Recalls Calfchild, “It really cheapens who we are as Indigenous people.”

“They basically said, ‘We have all this demand, these sales, so three voices don’t matter,” says Calfchild. When Spirit Halloween head office didn’t return email messages, the women picketed the store as well as other outlets selling similar costumes out of bricks and mortar stores and online.

Kneve says the protests tried to engage store customers, but “with mixed results… management was dismissive.”

Just as problematic for the women was the sale of headdresses, which represent restricted symbols in Indigenous societies, akin to medals for bravery.

Store owners didn’t seem to get the fact that “the regalia that a person wears, that’s all tribal history, that’s family history that’s geographical history,” says Calfchild. “Those are colours and symbols that have been passed down. Entire stories are sewn into that regalia.”

Prior to filing their complaints, lawyer Natalia Crowe-Barillas says her clients attempted to sit down with Spirit Halloween to try to come to an agreement, but the talks failed.

“What they wanted to do were some tweaks,” says Crowe-Barillas.

Crowe-Barallis says her clients argued that the retail stores created a poisonous environment by displaying and selling sexist and racist costumes. “The Human Rights Tribunal has found that a poisoned environment, whether it’s a work environment or in a store setting, can amount to discrimination.”

But she says Spirit Halloween was unmoved and “came back with a defense of commercial freedom of expression.”

It wasn’t until Crowe-Barillas filed applications of fact with the tribunal and statements from experts did Spirit Halloween’s lawyers indicate that they were ready to talk about a settlement.

Crowe-Barillas says the settlement will not go into the books as a legal precedent that will bind other sellers. “However, it does create a precedent in that a binding settlement between Spirit Halloween and my clients was reached.”

Spirit Halloween declined to comment on the settlement. A company lawyer wrote in an email response to questions from NOW that, “We are pleased the matter was settled amicably.”

Bonita Lawrence, an Indigenous studies professor at York University, one of the applicants’ expert witnesses, says the names used by Spirit Halloween on its costumes “imply sexual availability of Native women.

“Two of them, Naughty Navajo and Huron Honey, do so by caricaturing the names of Indigenous nations. And the third, Pocahottie, calls on this whole mythology around Pocahontas,” says Lawrence. “All three of the names were dehumanized or sexualized caricatures of Native women. The harmful effects of oversexualized images of Native women are really incalculable.”

Lawrence says that by the time she googled “Spirit Halloween” in preparation of her witness statement recently, the company had removed the costumes online. Lawrence was also pleased to see the ceremonial headdresses had been dropped.

“These images encourage stereotyping of Native peoples as relics of the past,” she says. “They ignore the real presence of modern Native people today. That’s why the actions of Calfchild, Kneve and Lester were so important.”