Who gets to tell the history of patients who slaved for the Toronto Asylum wall? 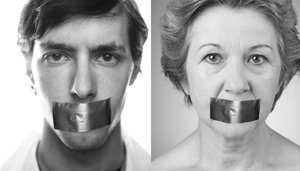 These words were written by an inmate of the Toronto Asylum for the Insane in the days when the walls on which they were etched served to confine and conceal.

The same words could just as easily have been written about the PR use to which photos of the brick walls were put last month at a show at the Lennox Gallery on Ossington sponsored by the Centre for Addiction and Mental Health.

The exhibit, entitled Voices From The Wall, included 28 photos of inscriptions carved by inmates into the boundary walls at the present-day CAMH, taken by photographer Tom Lackey.

Over the past decade, these stone barriers have taken on greater significance in the psychiatric survivor community, mainly because, although the fact was not publicized until the late 1990s, they were built by unpaid patient labourers.

Who gets to tell this history, and how, is a sensitive topic in a community that has long had its past interpreted by others with little respect for the subjects of that history.

Thus, the major problem with this exhibit.

It’s important to remember that the matter of who built this wall was ignored until psychiatric survivors publicized it. The original barriers, portions of which remain standing on the south perimeter of CAMH, date from 1860. These have etchings on them, as do the east and west walls, which were rebuilt from 1888 to 1889.

As recently as September 1996, a Toronto Heritage property report listed the actual builders of the walls as “none found.”

The same report went on to glorify the local architects who designed the wall. I discovered the real facts in 1996 in the Archives of Ontario while reading the asylum’s annual reports as part of my research for my U of T doctoral dissertation.

Since then, psychiatric survivors have spent a lot of energy publicizing the wall and commemorating the men and women who lived and died in its shadow. These efforts helped lead to the founding, in 2001, of the Psychiatric Survivor Archives of Toronto (PSAT).

When CAMH and the city organized a public competition to decide the fate of the east wall running along Shaw in 2003, PSAT drew on grassroots support, and now the future of this heritage structure is secured. CAMH even took up a PSAT idea to hire psychiatric at union wages survivors to preserve the walls.

This joint effort of psychiatric survivors, the heritage community and the CAMH administration represents important progress in getting mad people’s history preserved for posterity.

Which leads us to the photo exhibit”.

Who gets to present the history of a particular community is a sensitive topic, as most people involved in this issue know by now.

For as long as they could express themselves, people with a psychiatric history, including those at 999 Queen West, have had their letters confiscated by asylum staff and their views discounted as meaningless. This is not a thing of the past, but goes to the core of what many have experienced in their own lifetime in the mental health system today.

So its not surprising that when the photographer, Lackey, originally approached me in the summer of 2005 – and later other PSAT members – about collaborating with his photo project, there was support but also apprehension. Some members expressed concern to him about appropriation of voice by someone not a psychiatric survivor.

They were uneasy about using our common history in a way that might benefit exhibitors more than the community depicted.

Then, in September 2007, CAMH informed PSAT and CAMH’s patient Empowerment Council that it was sponsoring an exhibit of Lackey’s work.

Perhaps it’s not surprising that he chose to show with CAMH. We could not offer financial help our archives aren’t exactly rolling in dough. But we did want to collaborate, and Lackey was clearly willing to do so, even stating in writing last year his desire to share his work with us. What happened?

At the exhibit itself, the info sheet pointed out that the 28 images “will be issued in a limited edition of 10 signed and numbered prints.” CAMH would own the first one, the CAMH Foundation would use the next two for fundraising, and the remaining seven could be bought through the photographer.

Twenty-one of these prints sell for between $425 to $600 each, while seven go for $200. Fifteen per cent of the proceeds will go to the Foundation. What is wrong with this? After all, the artist did a lot of work and deserves to get paid.

But beyond this, why was there not money earmarked for permanent historical plaques, the text of which I provided to CAMH in 2006?

At an October 27 grassroots event organized to critique the exhibit, one long-time activist and Queen Street survivor, Mel Starkman, asked why none of the financial rewards were set aside for a memorial to the patients who built the wall. Activists have been advocating for this for years. Add to this the question of how many psychiatric survivors and consumers could actually afford these prints.

Back when I still thought we were going to be allowed to cooperate, I allowed a CAMH press release announcing the exhibit to quote me. In it, I ask if the public is prepared to listen to psychiatric patients silenced for so long. Perhaps if the ex-patient is a professor, he will be heard, though this has more to do with class privilege than challenging the silencing of mad people.

The beautiful depictions of words carved in unimaginable pain, enforced by years of confinement, were hung for gallery-goers to admire – as much for the prints’ sepia tones as for the mysterious madness behind them. Oh, how romantic, darling! They appear designed to hang over a professional’s desk.

But deal with the history of these walls representing confinement and exploitation? Well, let’s not go too far, lest the griminess rub off on our delicate hands!

As close up as these images are, they distance the viewer from the carvers. The bricks certainly look more beautiful than they would have to the unknown souls who left their mark on them for posterity.

History is grimy this exhibit was socially airbrushed for folks shopping for art while sipping cocktails.

Is this what preserving the wall has come to? To sum up the ethical failures here, you don’t have to go much further than one eloquent thought carved so many years ago on that asylum wall. Wrote one unnamed inmate, “Don’t.”

ON HOW THE SHOW CAME TO BE

“I originally shot 260 of these inscriptions to document them. I wanted to make sure, since sections of the wall were being taken down, that anyone could go back and locate every individual brick. “I went back and reshot on film the work that ended up in the show. The purpose of the exhibit was to display my photographs and introduce people to the fact that CAMH is redeveloping the [Queen Street] site and trying to open it up and make it friendlier and more approachable. CAMH purchased the photographs, which will hang in the new buildings.

ON THE PSYCHIATRIC SURVIVOR COMMUNITY

“I know them and I showed them photographs, but I had no specific connection to them. I know Geoffrey Reaume — if you want to know the specifics of patient labour, that happens to be his main area of study. I’ve only met with these people once, and that was one or two years ago. “I don’t know what their concerns are. They’ve not talked to me about them, but in some people’s eyes CAMH’s purchase of the photos is a way of honouring the memory of the people [who built the walls].

“I didn’t really have much to do with the organization of the show. I took the photographs, and CAMH decided to exhibit them and rented the Lennox Gallery to give the work a little profile for the redevelopment.

“I will be giving the Psychiatric Survivor Archives a full collection of the images.”

CAMH’s side of the story

“We have been trying to engage the broader public [in CAMH projects] as part of our anti-stigma work. It’s starting to kick in, and we’re getting a lot more people who have never had any experience with mental illness or addiction coming forward. I would put Tom Lackey in that category. “We just have to figure out a way to involve these people in a way that’s more satisfactory to the folks who’ve been the leaders in safeguarding this history over the years. We need to talk more about what does constitute appropriation of voice.”