NOW MagazineNewsStories from the front lines of Toronto’s opioid crisis

Stories from the front lines of Toronto’s opioid crisis

Everyone who works on Queen West Community Health Centre's harm reduction outreach team comes, in one form or another, from the street-involved communities they serve 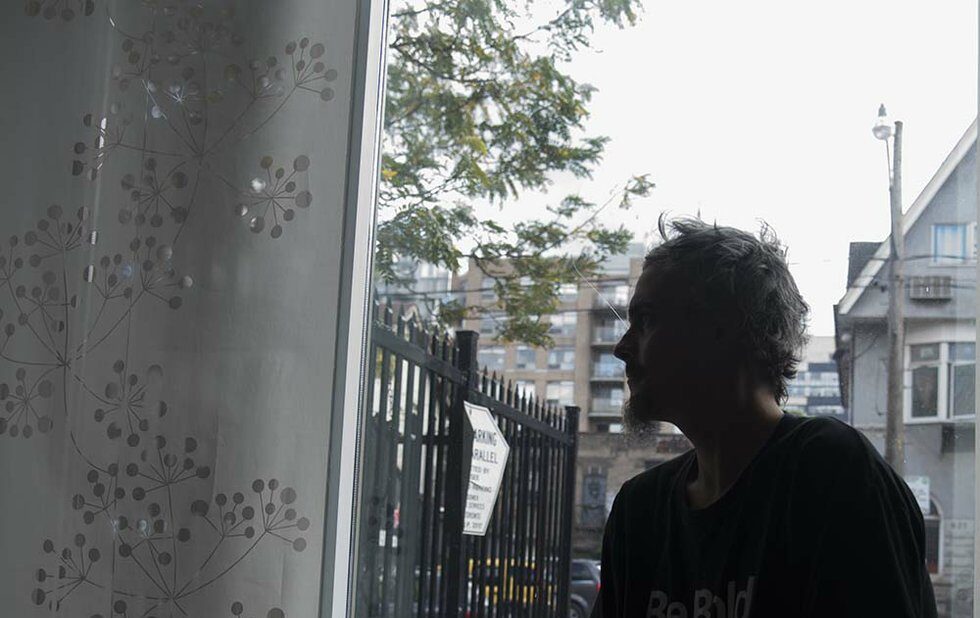 Five or six swift knocks land on a door at the end of the hallway. “Queen West! Anybody home?”

Kyle Bye and his aide-de-camp, Jacob Nagy, are in the middle of paying visits to clients in a subsidized apartment building in the west end.

The door opens slowly and a woman pokes out her head. For 10 minutes they inquire about her health, which she insists is fine, while handing her socks, soap and other necessities. She also receives condoms, clean syringes, naloxone – which quickly reverses an opioid overdose – alcohol swabs and a travel-sized container to dispose of used drug paraphernalia. She’s one of the roughly 1,500 clients the Queen West Community Health Centre’s harm reduction program has serviced over the last year.

Harm reduction peer-outreach workers employed by Queen West are mandated to provide services to low-income people from the area of Yonge to Dovercourt between Lake Shore and Bloor. Many of their clients are from marginalized communities. They’re either street-involved, drug users, impoverished, racialized or all of the above.

The woman at the door scoffs when Bye asks if she needs any feminine hygiene products. “I haven’t needed those things in years.”

“EACH AND EVERY ONE OF US HAS CONTACTED A PERSON WHO’S DIED.”

There were approximately 5,253 homeless people living in the GTA in 2013 (the most recent data available). Roughly two-thirds of those who accessed shelters had mental illnesses and substance-use issues, according to a 2014 report from the Mental Health Commission of Canada.

Increasing opioid-related deaths and overdoses in Toronto have hit the outreach workers and their clients hard. “Each and every one of us has contacted a person who’s died,” Bye says.

Preliminary statistics show that 179 people died from an accidental overdose in Toronto in 2016 – up from 135 the year before, according to the Office of the Chief Coroner of Ontario. As recently as 2008, fentanyl barely registered as an issue. Since then it’s been showing up more frequently in street drugs and has killed dozens of clients connected to the centre. In April, one  Queen West client overdosed and died in front of the building outside of operating hours. Much of Queen West’s outreach program is now focused on distributing as much naloxone as possible.

It took a toll on the agency, Bye says. “That’s your job, this is what you’re supposed to be preventing. But when no one’s here, it’s hard to do that.

“It’s especially hard to see someone doing fine and the next day hear they’re dead,” Bye adds. “It puts you back a couple steps, man. It’s just like, ‘How the fuck did that happen?’” 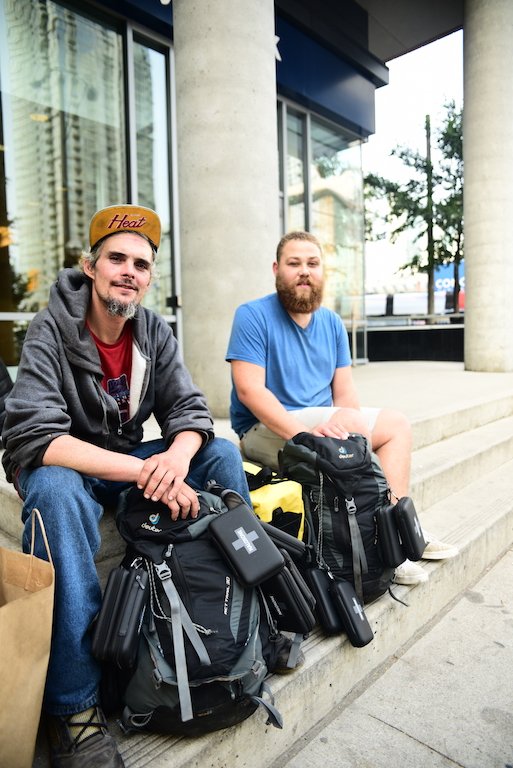 UNDER A BRIDGE DOWNTOWN

Everyone who works on the outreach team comes, in one form or another, from the communities they serve.

Bye inadvertently started training for his job two decades ago, when he was 16 and homeless. Originally from Pickering, he found himself living under the same bridges where he now visits clients as part of his work. In some cases, he grew up with people he now serves, which has earned him the respect and confidence of many clients.

Now, his more-salt-than-pepper hair and sun-bleached Miami Heat hat serve as a beacon for people looking for supplies or advice. He hopes his success in getting off the streets can serve as a source of inspiration to others. “You don’t ever have to give up,” he says.

On this Friday, the first stop on our route, which traverses a number of downtown bridges and the makeshift camps underneath them, is a woman named Crystal. She’s situated herself in the shadow of some of the city’s newer condos that line the GO tracks. She’s lived here, Bye says, since he started working at Queen West more than three and a half years ago.

She looks for housing on and off, and usually finds a place during the winter, but Crystal says she’s got a good thing going where she is now. “I actually have spirit here I actually have uplifting things around me.”

People from the surrounding neighbourhood, she says, come down to bring food for her dog, Rocky. She’s also earned the respect of some of the local police officers, after her role in stopping a sexual assault nearby. Rocky heard the screams first, she says. “I got to keep my bat it’s still here.”

Bye says he understands why people don’t always seek conventional housing. “Who wants to live in an apartment and have bedbugs? Fuck that shit.”

While Bye sees his life experience as a way to empathize and understand the people he comes in contact with in his work, it also comes with difficulties. He hasn’t been homeless for years, but it’s a label that’s difficult to shed. And as an occasional drug user, Bye says some of the clients will try to sell you something from time to time because they need money or someone to use with. “People try to test your boundaries,” Bye says.

Joyce Rankin is the clinical manager at Street Health in the city’s east end. Peer outreach workers there not only help clients keep appointments at the clinic, but often take them to other services, like the Ontario Disability Support Program (ODSP) on Yonge.

The nature of harm reduction work isn’t strictly to get people to use drugs safely, Rankin says. It’s also about “helping people to maintain and to progress. It’s a case of managing their use so they can be effective in their job.”

Although she manages the clinic, Rankin says she doesn’t have the lived experience that the peer workers do when it comes to knowing which areas a client might be frequenting, or when a bad batch of drugs hits the streets. She says it’s peer workers who are the first to know. “I can’t talk their talk.”

Fiona White, 31, has been working at Queen West for just over a year. During her Saturday afternoon shift, she gives an impromptu overdose prevention session on the sidewalk for three young panhandlers. She lays down on the busy Bloor sidewalk, to demonstrate “rescue breathing,” while dozens of people pass by without noticing.

“People don’t trust you as much if you’re not in the same boat as them,” says White. She says that she never used to worry about friends or clients using heroin, but since the rise of fentanyl in Toronto, she’s always thinking about it. “You’re on edge all the time.”

“People don’t trust you as much if you’re not in the same boat as them,” says harm reduction worker Fiona White.

Throughout his shifts with Bye, Nagy, 24, is an apprentice soaking up the unconventional knowledge that Bye is often spouting, like whom to cop a cigarette from or which clients he grew up with.

Although relatively new to the crew, Nagy says he loves the job. “I’ve always been the type of person who just wants to help.”

His dream is to work with at-risk youth in the LGBTQ+ community, something he already gets a taste of during their shift visits to YMCA’s Sprott House for youth in gender transition. Nagy says he grew up around people using drugs and using them himself, so it doesn’t necessarily feel like work.

Cathy Crowe has been a street nurse and activist for roughly 30 years. She says throughout her career she’s “always relied on the skills” of her colleagues with lived experience. Peer workers are “instrumental” in creating new forms of health care, like supervised injection sites, she says. “They don’t have to try to imagine what the circumstance might be if they’ve lived it.”

On their last stop during my tour with them, Bye and Nagy unload supplies at one of the larger camps near Lake Shore that accommodates about a dozen tents. They’re cleaned out in about 15 minutes. One of the clients here, Derek, grew up with Bye. He says the efforts of harm reduction workers are “keeping people alive long enough to make a decision whether they want to live.” 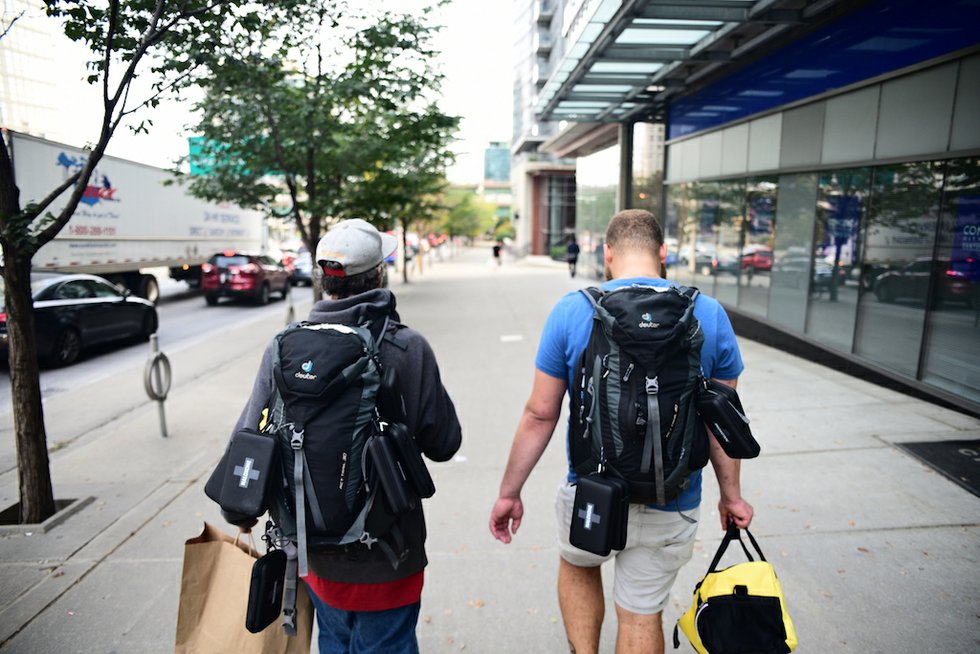