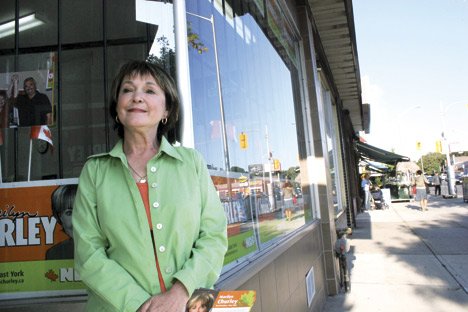 Marilyn Churley is banking on local cred in east-end race where green figures.

You’d think Beaches-East York would be Jack Layton orange, just as it is municipally and provincially.

But when former Ontario NDP cabinet minister Marilyn Churley ran in 2006, she was left 2,000 votes in the dust by Maria Minna, a member of the Liberal B team who has held the riding since 1993.

Then as now, the push for strategic voting is going to be critical to the outcome. But the progressive confusion in this riding offers a lesson in the pitfalls, rather than the power, of collective attempts to neutralize the Stephen Harper machine.

Not surprisingly, the idea astounds Churley. “I was done in by strategic voting in the last election,” she says at the rear of her campaign HQ near Danforth and Coxwell.

There are signs Minna is doing the same thing this time, she says. “Maria is leaving a trail of strategic voting everywhere she goes.”

But it’s not only the Liberals who are promoting leveraged voting.

In Toronto, many of the anti-Harper persuasion are looking to voteforclimate.ca, a Web operation based in Vancouver but targeting 80 ridings across the country that had tight results in the 2006 election.

The general advice is to vote for the incumbent in ridings held by the Liberals or NDP. The website advises: “In keeping with our policy of supporting sitting MPs from the ‘climate-friendly’ parties, we encourage the constituents in Beaches to support Ms. Minna’s re-election.”

But this riding, which includes the leafy streets of the Beach, the bungalows of East York, the Danforth strip and the high-rises of the northeast neighbourhood that are home to thousands of new Canadians, is somewhat of a fly in the strategic-voting ointment.

For one thing, there’s little sign in Minna’s political history of any particular interest in eco issues. It’s true that she championed a private member’s bill to eliminate toxic PFOS this year and serves as vice-chair of the Canadian branch of the Parliamentary Network for Nuclear Disarmament.

But green ideas have never been top of the mind for her, while Churley has an enviro record dating back to the early-80s fight against incineration on the east waterfront. She was an environment critic at Queen’s Park, and a leader in the Don cleanup project and the battle against the Portlands Energy Centre.

Though the two hug the leftist label, they are a contrast in styles. Whereas Churley is a newsmaking scrapper for a host of enviro causes, Minna has been an obscure figure despite having been an MP for 15 years. She served as minister of international cooperation for two years and was appointed an adviser to the minister of foreign affairs on women, peace and security.

But rather than charting her own course or championing the city as a whole, she has been content to promote the Liberal policy du jour. During my visit, she rhymes off the particulars of Grit eco policy with thoroughness but little passion.

When I ask voteforclimate.ca‘s Kevin Washbrook in Vancouver whether it makes sense to endorse a Liberal over an NDPer with a stronger enviro record when the Tory copped only 9,000 votes last time, compared to Churley’s nearly 18,000, he says, “You raise a good point. In retrospect, we probably should have left that riding alone.”

Meanwhile, another citizens group operating under the banner of voteforenvironment.ca is offering a more considered view of the best options in this tricky riding. “A tough race,” acknowledges the site, which sifts the latest polling data for ridings across Canada and applies them to last election’s results. The site shows Churley slightly ahead of Minna but offers no recommendation. “Vote with your heart,” it advises. “The environment is more important than partisan lines,” says the site’s Kevin Grandia from Vancouver.

So the most accomplished environmentalist in Beaches-East York will have to win through her own devices. As well as Minna, she’ll have to contend with the Greens, which have a full-time candidate complete with Danforth campaign office just a few doors from Churley. Zoran Markovski is expecting most Green votes to come from south of the Danforth.

That’s also prime pickings for the NDP, which means that Churley’s fate this time rests on getting more votes in the multicultural northeast corner, which voted in overwhelming numbers for Minna.

It’s not surprising, then, that Minna has reacted head-on to NDP charges that she didn’t know enough to stop the controversial Conservative immigration bill that gives employers a lot more say in who will get into the country and is expected to make family reunification more difficult.

NDP leader Jack Layton, whose riding is next door, pointed out in a recent householder mailing that Minna “repeatedly avoided voting down” the Harper measure.

Not so, Minna fires back – she did stand and vote against the bill.

In an early-morning interview in her campaign office, Minna insists on her immigration credentials, pointing out that she was a president of COSTI, an agency that provides services to new Canadians. As for her political persuasion, she says she’s just as much a part of the progressive political spectrum as Churley.

“I’m as left as any NDPer,” she tells me. “I just choose to do my politics in such a way that I can get things done.”

Whether it’s retirement or return for Minna depends on whether Churley can reassure voters that the Tories are no threat in the Beach, and that one more NDPer from Toronto would be better than a wall of Liberal MPs likely to be distracted by the leadership contest that may begin the day after the election.