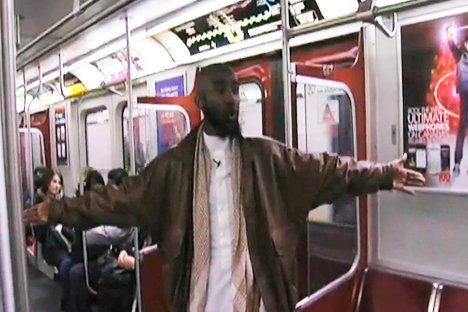 Poetry on the Way, the TTC-authorized project mounting small poems in transit vehicles in Toronto, tries to make the typical commute a little more lyrical. Guerilla poetry on your way to work, however, makes for a whole other ride.

In a video posted on YouTube in late December, a local poet suddenly begins reciting a spoken word poem on a subway car.

Boonaa Mohammed is a young activist-poet who doesn’t shy away from confrontation. No surprise he’s giving guerilla poetics a whirl, performing a poem about self-esteem and weight issues on a subway car where riders look mildly interested in his performance. Is the screwface stereotype true even on subway cars?

It’s not like Boonaa’s material is boring. He drops some chuckle-worthy lines, especially when he talks about his skinniness: “Everybody’s gone crazy, trying to lose weight, hey why don’t you just throw some my way with all your cool machines and burn-fat-quick schemes. What about people like me who only get stretch marks in our dreams?”

The TTC has seen spontaneous dance parties and coordinated music videos, so there’s bound to be room for spoken word artists to use the wine-red seats and subway maps as background to their performance videos.

It’s no Improv Everywhere, but it sure makes riding the subway a lot more interesting.