Despite hot air from Jim Prentice, Copenhagen could yet be constructive 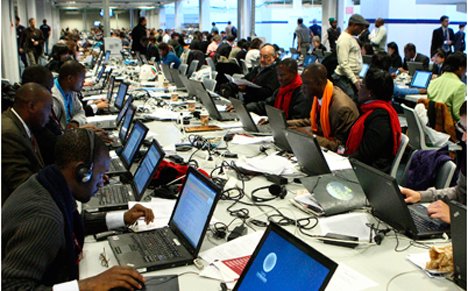 Crunching the numbers at the Bella Centre in Copenhagen

Crunching the numbers at the Bella Centre in Copenhagen

One day to go and hope has found its way back to the Copenhagen proceedings.

The U.S. commitment to support a post-2020 $100 billion dollar yearly fund delivered by U.S, Secretary of State Hillary Clinton this morning put a real wind in the sail towards an agreement. This is what China and the developing world needed to hear to keep them at the table.

And it is also a good down payment on the real dollars needed for the whole planet’s transition to a new truly low-carbon way of human-life. Doing the right thing by the developing world will turn out to be doing the right thing for ourselves. The order of magnitude of these promised dollars will necessitate new financing alternatives which will certainly drive huge changes in both the developing and developed countries.

Ending dirty energy subsidies, for example, will be driven by necessity of finding that money. And removing the privileged hold of the oil companies on the world’s tax dollars and offering those up to investment in renewables to replace deforesting black carbon for the energy-poor of the developing world, for example, will have untold secondary and tertiary benefits that will ricochet across the world economy.

Again, driven into being by politicians in great need of alternative public funds outside current limping tax revenues more strained than ever by the draw-down of this year’s economic crisis, carbon credit auctions, carbon taxation systems and/or a tax on financial transactions could have huge potential to support a world in transition to a potential ecological age.

But will it be enough?

Sadly, it is very unlikely that we will leave Copenhagen with a deal which, in itself, will match the science-based estimates of what it will take to protect this world from hazardous temperature rises as the accompanying graph shows. Much deeper cuts are needed and they are needed quickly.

Tomorrow, with the arrival of Obama, we are hoping for a more ambitious target than has been put forward by the U.S. to date of a mere 17 percent below 2005 levels in line with the clean energy Waxman Marckey Bill passed by Congress. But the domestic political constraints weighing against a more ambitious move are enormous.

This target is only better by a hair’s breath than the target put forward by Canada. But then again, a complete lack of any action to reduce emissions and leaked Cabinet documents confirm that Canada is not intending to meet any target while the U.S. is actually on course to better the levels they are willing to commit to.

Still, the U.S.falls far short of the 30 percent below 1990 levels that the EU has offered up should others come forward with serious movement. And even this number fails to deliver the carbon reduction needed to keep the many island states around the world from almost certain devastation.

It is almost midnight here but the high level plenary is in full swing running several hours late, with leaders and high level ministers coming to the podium mostly to express their desire for an ambitious and binding deal.

Well, when we get to Saudi Arabia, not so much. Carbon capture and storage figure big in his short address. And a little bit of solar. Then comes Fiji’s minister of foreign affairs who explains that a cyclone has kept the Prime Minister from getting to the Summit as planned. He has no trouble bringing the need for a practical deal home.

Very soon it is Canada’s turn.

Since he is here, you would think this would be the moment for our Prime Minister to add his words on the subject to posterity. But he is sending Environment Minister Jim Prentice to speak for him, because in this final hour, all the words Canada has to say are the same words we came with.

At the podium, Prentice emphasizes his government’s (not ours) desire for a deal that recognizes Canada’s particular features (as if every country isn’t particular) of “a large land mass, a growing population and an important energy sector.” Land masses are a plus for a low carbon world, everyone has got a growing population and just ask Mexico, which has agreed to major carbon reduction targets, what a country with an important energy sector can try for.

Prentice touches on all the divisive issues of monitoring (China has a problem here) and the need for commitments from the developing and developed world with the irritant of no acknowledgement of any special role for the developed world to play a special role. It’s like the last two weeks never happened in the Canadian script.

But the world has moved on even though Canada hasn’t.

As we wait for Obama and the top line agreement that will come Friday – possibly in the wee hours – there is still hope that all the other countries in the world are not stuck, like the Canadian Government, in the world where the physics of the planet is less important than the comfort of Canada’s energy sector.

What counters even the darkest hours of these negotiations is the exposure to the breadth and range of work that is being done on every aspect of this issue.

Climate change transgresses all borders of all kinds. And many of the best minds of the world are working on many levels to deal with it. There are literally hundreds, maybe thousands, of presentations and showcases taking place here at the same time as the negotiators lock heads in session.

We even have seven Canadian premiers and many mayors including our own David Miller here, showcasing their actions and learning from their peers in other countries, provinces and cities. Innovators, scientists, investors, CEOs, policy planners and politicians are all networking their butts off along with every sector of civil society imaginable.

So Copenhagen will not be the last word.

The deal we get will make a huge difference that only future generations will be able to truly measure but now that the long-term finance issue is secured, the real work will not be stopped.[rssbreak]