A chronicle of calamity forged by storms, shipwrecks and stormy politics 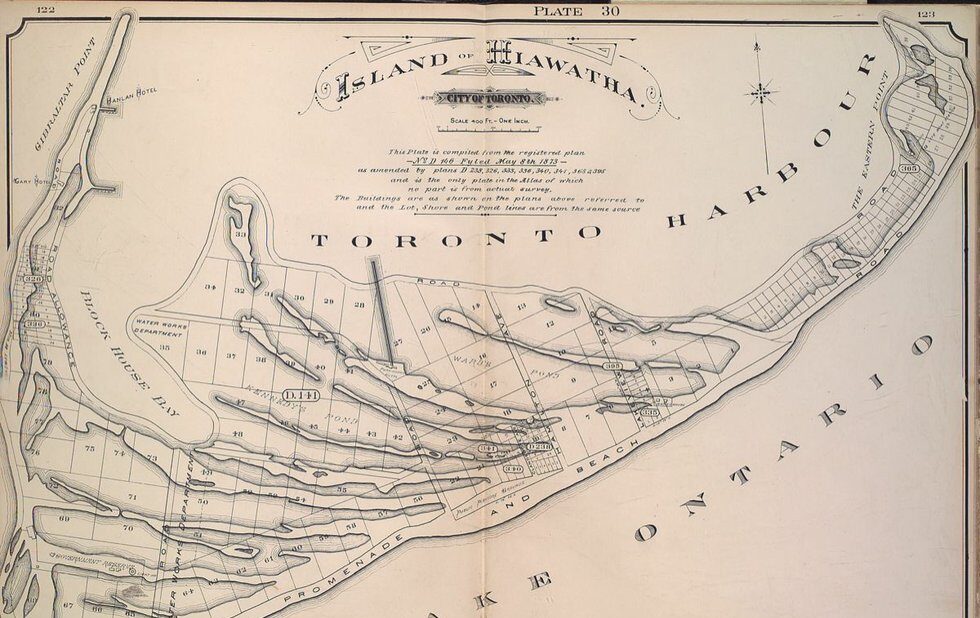 Special survey and registered plans from Atlas of the City of Toronto showing all ­buildings and lots on Toronto Islands circa 1884.

Wind, rain and natural disasters have continued to reshape the Islands ever since what is known today as the Eastern Gap was opened by a storm in 1858. The history of calamity in Sally Gibson’s stunning chronicle More Than An Island: A History Of The Toronto Island is long and tragic.

December 1, 1856 The steamer Monarch is driven onto the beach in a raging snowstorm, washing its deck cargo overboard. But somehow the crew make it to shore. A day later, the schooner J. G. Beard, with 200 tons of coal on board, runs ashore after it mistakes a light on the wreck for the Toronto Lighthouse. 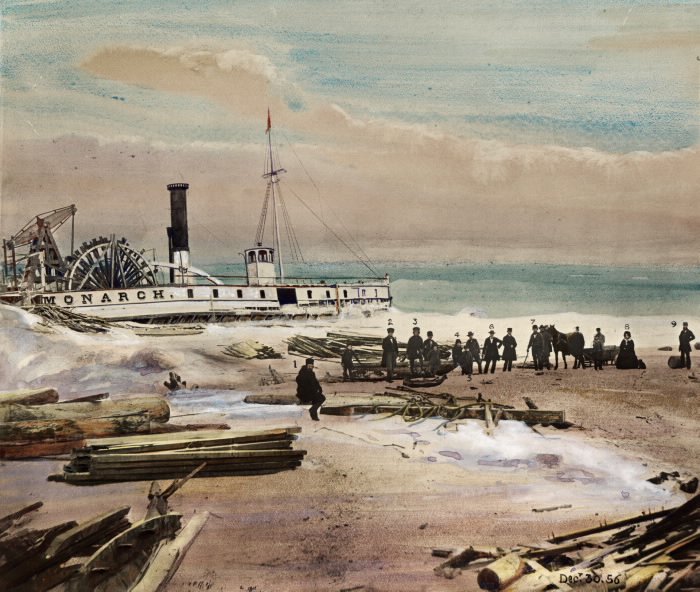 The paddle steamer Monarch runs aground in a snowstorm in 1856.

May 11, 1862 The islands’ darkest tragedy: 15-year-old William Ward (son of famous fisherman David Ward, after whom Ward’s Island is named) takes his five younger sisters – Rose, Jane, Cecilia, Phoebe, Mary Ann – sailing on the bay. His siblings perish when high winds catch the sail and capsize the boat. Two days later William tells an inquest: “Phoebe hung on by the side of the boat as long as she could and then went down.”

William’s mother had already lost three other daughters, in a single night, to scarlet fever. She paces the shore for years afterwards, looking out to the lake. Children turn the tragedy into a play that ends with them calling “Phoebe” over the water.

Winter, 1870 John Ward, uncle of William, attempts to walk across the frozen bay from the city to the Island. Blinded by snow, he wanders onto open water and drowns.

May 2, 1870 On the mainland, the city that experienced numerous outbreaks of cholera during the 1830s and 1850s confronts another threat: polluted drinking water. In 1873 a steam dredger excavates a filtration basin along the south edge of the Island. The basin is connected by a wooden conduit that carries clean water to Gibraltar Point where it connects to a steel pipe that goes under the Western Gap to the city. The solution is not perfect. Soon after it’s installed, 2,500 feet of wooden conduit float to the surface “like a wooden snake.” Two more years pass before the pipes are running again.

October 31, 1873 The schooner Ann Bellchambers wrecks. Charles Colman and two other men wade out to the vessel. Colman finds the captain in the rigging, insensible, with the dead body of his son in his arms. 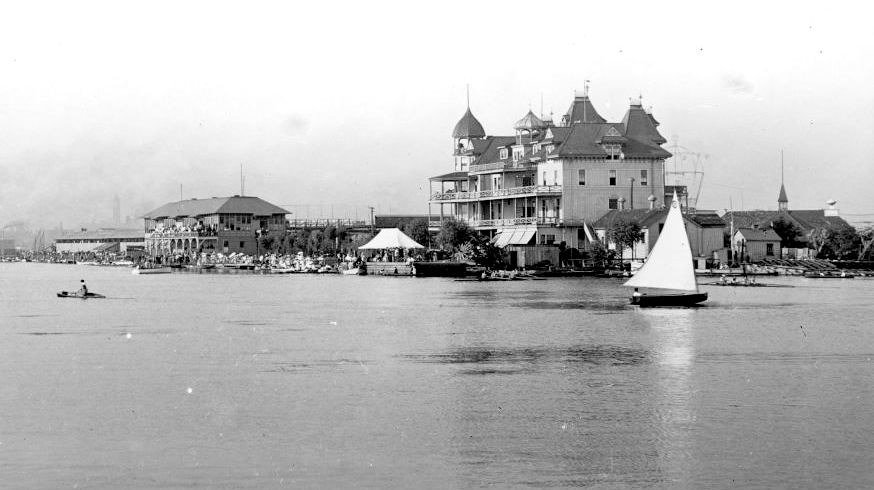 Summer 1878 In July the Hanlan’s Point bridge to the bathing beach on the Western Sandbar washes away. In September, after rain floods the islands, Harbour Master John Carr describes the bay as “fearful to look at, covered with timber, scows, boat-houses, barrels of beer, oil, etc., so it’s almost impossible for a steamer to approach the docks.”

October 1880 After the “melancholy death” of two boys adrift on the lake, the Dominion Life Saving Service provides the Toronto Islands with a lifeboat. William Ward is its captain devoting much of the rest of his life to rescue, saving 164 lives in all. He supplements his meagre income with profits from bootlegging for his family hotel. He comes to be known as the “Laird of Ward’s Island.” 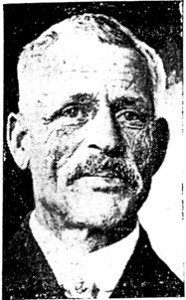 May 1882 A storm sends four-metre waves charging into the southern beach where they gouge new channels, uproot trees and rip great chunks out of the sand. Every island house is damaged.

1883 A storm hits the Royal Canadian Yacht Club. Some of them sink. Two are driven onto the Waterworks Wharf on the mainland and smashed. 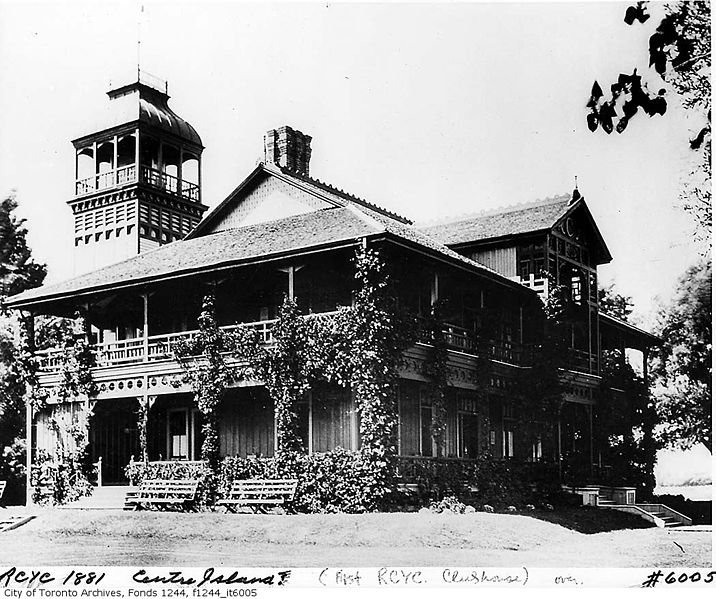 May, 9 1904 A storm slices the western sandbar. Wooden breakwaters are smashed. Every one of the Islanders’ 165 tents is knocked down. When it’s over, veteran islander Daddy Frank plants poplars to hold the sand. They help, but the islands are smothered in snowstorms of poplar fluff every June from then on.

1908 It’s a waterlogged spring and summer, with 10-metre waves blasting island beaches. Nowhere can be reached without boats or rubber boots.

1937 To allow construction of the Island Airport, houses are floated down the Islands’ Regatta Lagoon to new sites on Sunfish Island that’s planted with trees and renamed Algonquin Island. The lagoon where Ned Hanlan rowed to so many triumphs is filled in. The flimsy breakwater on the south shore of the island is rebuilt in concrete and topped with a boardwalk. It turns out to be a mixed blessing: waves that break over it have no way to return to the lake.

July 27, 1941 Toward the evening of a summer scorcher, a sudden storm uproots trees and lampposts, smashes tents and cottages, capsizes boats and causes “more havoc than any storm that can be recalled by any Islanders.”

Spring 1943 It’s so wet that new lake-level records are set. Mosquitoes are said to be so gigantic they can knock people off bicycles.

Spring 1947 The lake-level record set in 1943 is broken, only to be broken again four years later. Beaches are devoured. Islanders are “tired of living in muck and mud.” New proposals suggest making the Islands “a self-sustaining recreation centre for the metropolitan area of Toronto.”

1952 The Islands, still sodden from the previous year, are drenched again. Parks Commissioner Walter Love suggests the menace to public health warrants removal of the Islanders. His fears are dismissed by the City’s Medical Officer, but among politicians and officials who want residents off the island, it’s an argument that will not go away.

1956-57 Metro Toronto’s determination to convert the Islands to a park without residents reduces Centre Island “to a giant graveyard of houses.” More than a hundred buildings are demolished and burnt trees are felled.

1963 The remaining Islanders fight Metro’s plan to turn the islands into parkland. It will take 10 years before City Council decides to preserve the community. But Metro Council remains opposed.

December, 1981 After a number of legal battles, the province passes a law allowing the city to lease lands back to the Islanders. The agreement is formalized in 1993 allowing Island residents to purchase 99-year leases on their property.

January 25, 2017 William Ward, last of the family line on the Toronto Islands, dies at his home on Algonquin Island 115 years to the day after the death of his famous namesake who became the Laird of Ward’s Island.