TTC chair formally announced his run for mayor at Revival 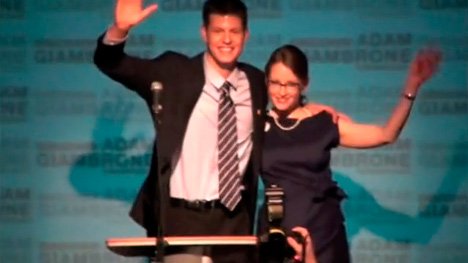 Toronto’s new favourite whipping boy and fleeting YouTube sensation, Adam Giambrone was on Monday host of the hottest party in town, when the beleaguered TTC chair formally announced his run for mayor to a capacity crowd at Revival on College Street.

“This will be a spirited campaign,” Giambrone declared, positioning himself as the optimistic one among the mayoral hopefuls. In his speech he presented himself as a “city builder” in the Miller mold and, for better or worse, tethered himself to the fortunes of Transit City.

“I will not let transit be squandered away,” he said, “and that’s why I’m running for mayor!” This was the oft-heard refrain throughout the speech, as many were no doubt wondering. With his defiance, baggage and positive spin, he’s running like the incumbent of this election.

A handful of fellow councillors were among the crowd, including former TTC chair Howard Moscoe, Glenn De Baeremaeker and even Transit City opponent Karen Stintz made an appearance.

The event was all part of Giambrone’s carefully crafted social media strategy. Last week Giambrone plugged his announcement on YouTube with a light-hearted campaign training video and during the party supporters were encouraged to spread the excitement by tweeting from their phones.

Inside, the gala atmosphere felt as if the TTC’s recent public relations fiascos never happened. The illusion of Giambrone’s unstoppable momentum was only broken with the music low and the front doors open, which let the chants of his boisterous Lansdowne opponents leak in from outside. Meanwhile, his YouTube clip has already been the subject of numerous parodies and partisan remixes.

Then again, maybe it will all work in his favour. “This is a lot of buzz,” one supporter was overheard saying to a Giambrone staffer. “Did you pay these people to come and protest?”[rssbreak]