Harm reduction workers on the front line of fentanyl-fuelled overdose epidemic say it’s time for the federal government to start having open discussions about legalizing hard drugs, including access to prescription heroin 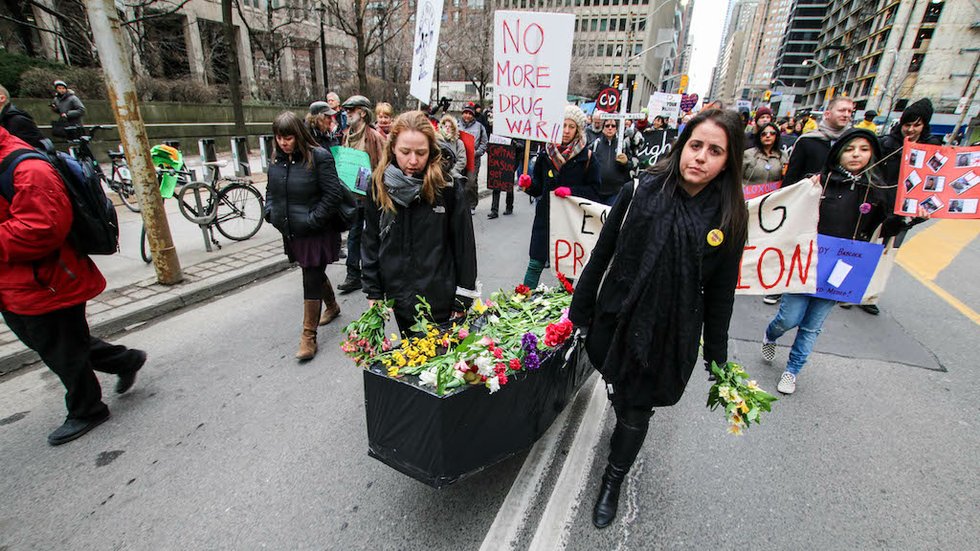 National Day of Action on the Overdose Crisis in Toronto was one of eight protests held across the country Tuesday, February 21 to draw attention to the opioid emergency in Canada.

On Tuesday, February 21, a funeral procession set off from Bay and Wellesley and snaked its way through downtown Toronto. There was no motorcade no one was being buried.

The mourners included people who use drugs, harm reduction workers and their allies, all paying their respects to the hundreds who’ve died from drug overdoses this year. Demonstrations, part of a National Day of Action on the Overdose Crisis, also took place in Vancouver, Victoria, Edmonton, Montreal, Halifax, Nanaimo and Ottawa.

Dubbed They Talk, We Die, the protest was part of an effort to focus attention on a growing fentanyl-fuelled overdose epidemic – the worst in Canada’s history, some say – and demand an end to drug prohibition, which organizers say is exacerbating the crisis.

“We need to end the drug war, to end prohibition. It’s killing people,” says Zoe Dodd, a Toronto harm reduction worker and one of the event’s organizers.

People who’ve seen more than their fair share of friends and family members die have reached their limit, says Dodd.

“It’s depleted my energy, grieving so many people constantly.”

The meandering, disorganized response to the overdose crisis by governments at all levels has added to the frustration. There’s the slow pace of federal approval for safe injection sites – three are pending in Toronto – and a provincial crackdown on opioid prescriptions for drug users in therapy programs. Dodd says those on the front lines of the epidemic – harm reduction workers and drug users – are being uniformly ignored.

Protest organizers tell NOW that the criminalization of drug use is one of the current epidemic’s main causes.

They’re not the only ones aware of the problem. Recently, two Vancouver MPs, Liberal Hedy Fry and NDP health critic Don Davies, have argued that the overdose crisis has become so serious that it’s time to start having open discussions about legalizing hard drugs.

Noting Canadian drug policy’s roots in political science rather than neuroscience, the CPHA recommended a public health approach “based on the principles of social justice, attention to human rights and equity, evidence-informed policy and practice, and addressing the underlying determinants of health.”

Ending prohibition would help end the opioid crisis in a few different ways, argues Matt Johnson, a spokesperson for the Toronto Harm Reduction Alliance. If users weren’t forced into the criminal justice system, they’d be less likely to use unsafe drugs in unsafe environments. Decriminalizing drugs would also decrease the stigma and shame associated with drug use, so people would be more open and honest about it and get the help they need.

Prohibition is futile, says Johnson, because those who control the drug trade are far beyond any form of jurisdiction or punishment. “All that happens is the people who are caught up in using get punished.”

In Ontario, it’s hard to know exactly how many are dying from overdoses and from what substances. The last information, released in 2014, listed 674 opiate-related deaths. Preliminary figures for 2015 all point to an increase. Anecdotally, both Dodd and Johnson say the loss of life they’re witnessing on the streets now is unprecedented.

“I feel defeated each time someone dies,” Dodd says.

In January, the Ontario government cut funding for high-strength opioid medications used as substitutes by intravenous drug users. Among drugs no longer automatically covered by the Ontario Drug Benefit (ODB) program: high-dose morphine tablets, hydromorphone (Dilaudid) capsules and fentanyl patches. Doctors who prescribe any of these drugs must show that patients meet rigorous criteria on a case-to-case basis.

In October 2016, the Centre for Addiction and Mental Health (CAMH) published the Prescription Opioid Policy Framework. CAMH celebrated the proposed guidelines to “modernize” Ontario’s addiction treatment system, but the report also noted that when action was taken to replace OxyContin with a tamper-proof substitute, OxyNEO, heroin usage rates more-than-doubled. The result: more people ended up turning to the streets to search out more dangerous ways to get high. Drug problems moved from doctors’ offices to seedy hotels and dark alleys, underneath bridges, into city parks and, last week, the bathroom of a Kentucky Fried Chicken on Queen West where an overdose occurred.

The opiate problem goes far beyond the big city. According to a November 2016 report published by the Ontario Drug Policy Research Network, Toronto had the most overdose deaths, but smaller jurisdictions like Thunder Bay and isolated communities in Timiskaming District had more overdoses per capita.

Activists are calling on the provincial government to revise what Johnson calls “its harmful prescription drug policies. I work in this community,” says Johnson, himself a drug user. “It’s my friends who are dying, it’s my community that’s dying.”

In Vancouver’s Downtown Eastside, the Providence Crosstown Clinic operates at West Hastings and Abbott, an intersection that’s become synonymous with BC’s chronic opioid crisis. The province recorded 914 overdose deaths in 2016, 215 of them in Vancouver. For contrast, from 2013 to 15, 895 people in BC died in car accidents.

The Crosstown Clinic is the first North American facility that offers medical-grade heroin, known as diacetylmorphine, in a doctor-assisted clinical setting. While Vancouver is also home to Insite, North America’s first legal supervised injection site, Crosstown is different: it’s supplying the drugs to those who need them.

Lead physician Scott MacDonald tells NOW that the work for Crosstown started as part of the North American Opiate Medication Initiative (NAOMI) study. The study showed the near across-the-board effectiveness of opiate substitution therapy (OST) in addressing chronic injection opioid use. But ultimately, attempts to put OST into practice “folded, despite the evidence to support it.”

NAOMI was followed by the Study To Assess Long-term Opioid Maintenance Effectiveness (SALOME), which concluded that hydromorphone worked as well as heroin in treating chronic opioid use. What’s significant about the SALOME study, MacDonald says, is that it removed a barrier for the doctors themselves: hydromorphone is easier to prescribe to patients than heroin, a schedule 1 controlled substance.

MacDonald also notes that while safe injection sites must get an exemption from Health Canada to open (besides the three in Toronto, seven other Canadian sites are awaiting approval), supervised hydromorphone facilities don’t require any exemptions.

SALOME confirmed what many doctors and harm reduction workers had been saying for years: people will stop using dangerous street drugs and committing crime to get them if they have a safer alternative.

“In the time since the study, we’ve seen some people [patients at Crosstown] reconnect with their families or complete school, and many folks are working part-time or full-time.”

MacDonald says that one of his patients had been in and out of jail over 200 times before coming to Crosstown. “Since he’s been in treatment here, he’s not been to jail once.”

Crosstown isn’t the answer to the opioid crisis it’s one of the tools that can be used to address it, MacDonald says. It’s also cheaper than our current ways of treating drug addiction, most of which ultimately rely on the criminal justice system rather than public health. Removing the burden on the police and courts would more than make up for the cost to the health care system.

There’s ample evidence to suggest Macdonald is right. Portugal decriminalized low-level possession and use of all illicit drugs in 2001. According to a 2010 study published by the British Journal of Criminology, What Can We Learn From The Portuguese Decriminalization Of Illicit Drugs?, there was no significant increase in overall drug use in the general population, and use among adolescents actually declined. The study also noted, on average, 9,000 fewer drug-related arrests per year.

It’s hard to say how lessons from the Portuguese experiment can be applied to a Canadian context, but advocates remain steadfast that European ideas of harm reduction and decriminalization will inevitably gain ground here. There’s no other option if we hope to stem the current emergency, says Dodd.

“We have to have hope – we have to for each other. We can’t afford to keep losing people. We’re losing the drug war, and the casualties are the people we love.”