How art helped build a sense of community in Parkdale 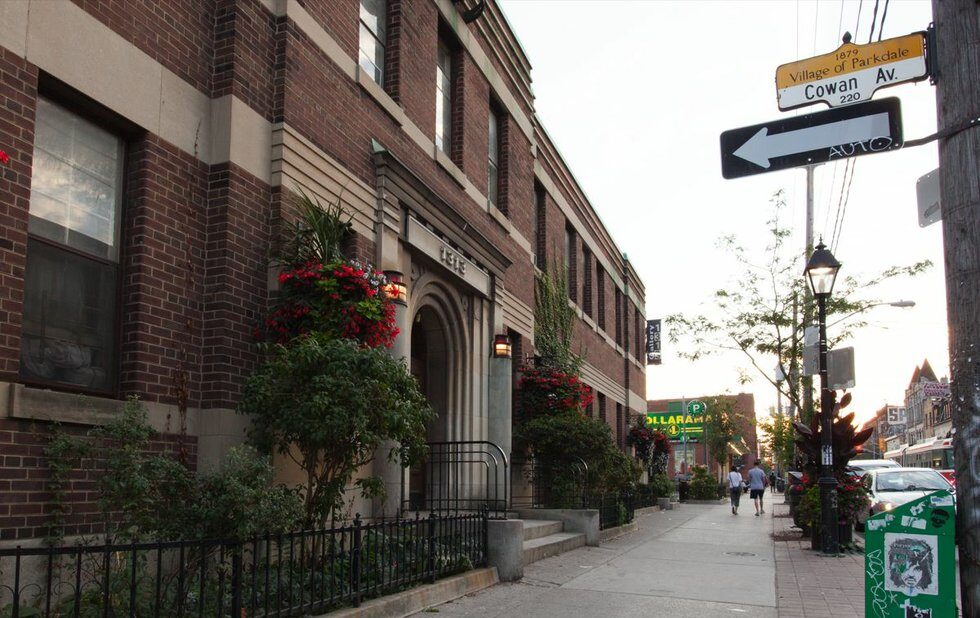 The building now known as the Parkdale Arts and Cultural Centre has a colourful history, first as a police station (Division 6 from 1931-1963), then as emergency housing, before going empty for a few years and being used for film shoots for Robo-Cop the TV series and It Takes A Thief. Once, a young woman approached to ask if she could perform a cleansing ritual in the space. She said she had detected some bad vibes.

The term “community hub” can be used to describe the mixed-use building housing artists, a gallery and community offices it has become today, but the intersection of Queen West and Cowan has long been central to Parkdale life.

I have lived in Parkdale for a number of years and have found it as attractive as it is diverse, a place with history as well as a little edge. It is also a community actively striving to be a caring place. A filmmaker friend thought the area was more like an American city with a melting pot of cultures, as well as marginalized and privileged residents. It felt for me like a small town on the edge of a city back when the art deco building opened as a home for the Parkdale Village Arts Collective in the mid-1990s.

Back then I did a walkabout with a journalist from a daily paper exploring the Parkdale hood, Liberty Village and its art scene. The morning the feature article appeared in print, I received a call from a local real estate agent thanking me. She said her phone was ringing off the hook with buyers interested in the area. I felt a sudden sense of queasiness. What had I done? Would I be tagged as a foot soldier of gentrification as other artists have been called? I was trying to help renew a sense of pride in a community used to getting beat up.

The area had a reputation as being plagued with drug activity. The property was owned by Metro but then-councillor David Miller helped get the building’s lease turned over to Artscape, which marked the organizations’ first foray into mixed-use development.

The arts collective played an important part in the area’s early development, offering the community at large access to the building. Twenty years on, the building is now home to nine live-work artist studios, an artist production studio and Gallery 1313, as well as the Kababayan Multicultural Centre, the Parkdale Village Business Improvement Association and Students for a Free Tibet.

The gallery is incorporated as a not-for-profit and artist-run centre with charitable status. It has over 60 member artists across the GTA and a board of directors. With an operating budget of between $65,000- $85,000 a year, it receives no ongoing operating funding but has received grants from the Ontario Trillium Foundation, the Toronto Arts Council and Ontario Arts Council among others.

The gallery’s programming has tried to reflect the diversity of Parkdale and to provide a space for emerging artists. Each spring, students from OCAD University, York University, Sheridan College and Ryerson exhibit their work.

As market conditions in the area continue to change, the city is reportedly planning to extend its lease with Artscape another five years. Representatives from the city’s heritage department recently toured the facility and were impressed.

But all three buildings require significant upgrades. What’s next for the area? A welcoming square, such as the one proposed in the 1990s, with park benches and gardens, would certainly be an improvement. But the city has had little money to complete any of the modest designs proposed.

Some were uneasy about the agenda of the BIA, but the hope was that the collaboration could benefit artists as well as the community. The first project, an annual street festival called Artbeat, operated with a small budget from the BIA and a grant from the Toronto Arts Council. The festival ran for several years and featured visual and spoken word artists and filmmakers. One year, a Citytv reporter stated that the festival was coming to viewers live from the Beaches. The community got a kick out of being mistaken for this other end of the city.

Over the years, the arts collective started to organize other exhibitions and broke from the BIA. Planning for the Parkdale Arts and Cultural Centre started. There were many groups interested in the building, which had been empty for several years after being split into apartment units to be used for emergency housing. The Parkdale Intercultural Association expressed interest in turning the building into a social services hub. Homes First was also interested in the property. The community was divided.

After meetings to discuss the various proposals, a community board was set up to help decide who the tenants would be. At one point, some 32 different groups were vying for space in the building. The original tenants included the Mariposa Folk Foundation, the Somali Centre, the Kababayan Centre, a Vietnamese women and children’s group and Gallery 1313.

The city donated $250,000, which was used to bring the building and live-work studios up to code. About $17,000 came from the Parkdale Liberty Economic Development Corporation for a new entrance to the gallery including a canopy, banners, lights and a wheelchair accessible ramp.

Hopefully, the gallery will continue to hold its own and be part of the newly planned community hub.