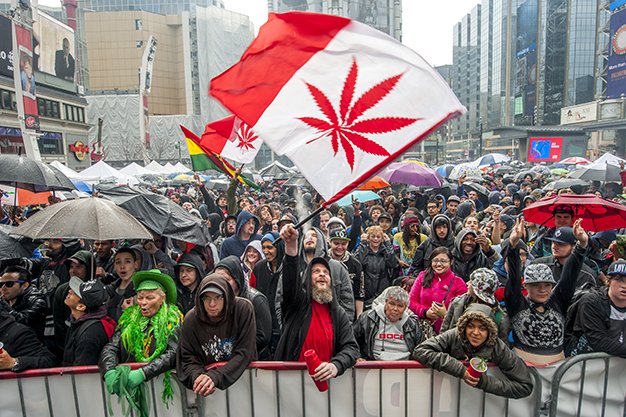 A man waves a Canadian cannabis flag in front of the crowd during the 420 rally at Yonge-Dundas Square.

For the last 420 before legalization (fingers crossed), get high with fellow pot activists and enthusiasts at these green events happening in Toronto.

The 12th annual bash moves from Yonge-Dundas Square to Nathan Phillips Square. Although the event was denied a permit, organizer Chris Goodwin (Cannabis Culture and Pot TV), insists the festivities will go on as planned from noon to 7 pm with speakers, music and food trucks to satiate any munchies. See Facebook for more details.

While it’s tempting to spend 420 getting stoned at home and re-watching Harold & Kumar Go To White Castle, why not go out and see some comedy IRL. Yongesterdam Lounge once is throwing a 420 comedy night, this year featuring Zoe Brownstone, Dave Martin, Rebecca Reeds and headliner Ali Hassan. Before the comedy show, get the good vibes flowing with a hosts reiki healing session, which are available at the venue for $5. See listing for more details.

Two days before 420 proper on April 18, High5 presents a pop up with over 25 craft cannabis vendors, including Alair, Fritz’s Cannabis Company and Dragon Elixir, a CBD cocktail bar and a comedy show. The exact location of the event will be released 24 hours prior, but you can buy tickets in advance. See listing for more details.