On May 27 and 28, gain access to over 150 of Toronto’s most architecturally, historically and culturally relevant buildings 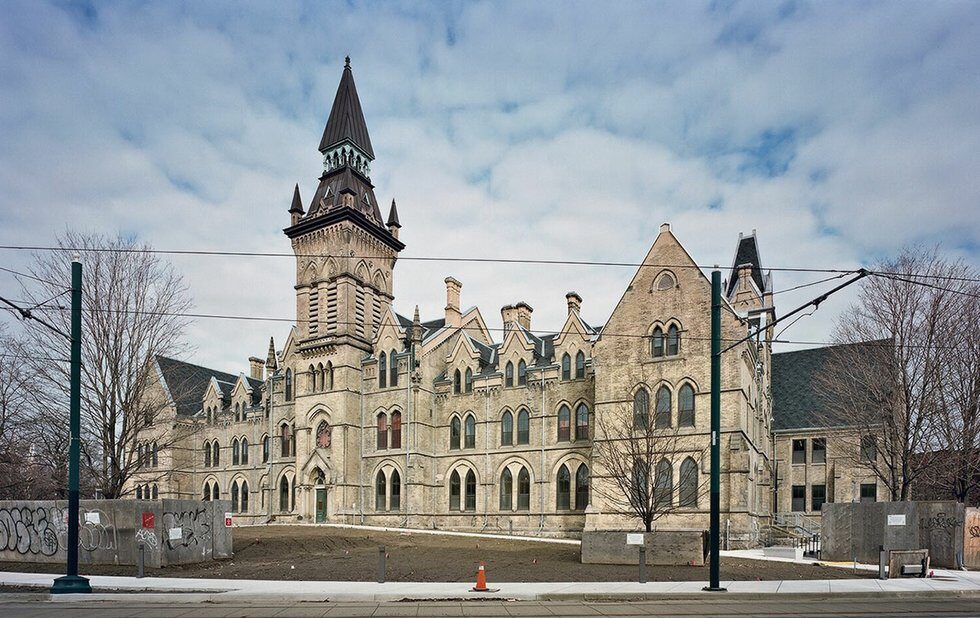 Renovations to the Daniels Building at 1 Spadina won't be completed until later this year, but Doors Open visitors can get a sneak peak of the historic site on May 27 and 28.

Step inside some of Toronto’s most architecturally, historically and culturally relevant buildings during the 18th annual Doors Open on Saturday and Sunday (May 27 and 28). The 18th annual free, all-ages event gives the public access to more than 150 buildings under the theme 15 Decades Of Canadian Architecture.

This year, explore buildings predating Confederation and from each decade after, including the neoclassical Campbell House Museum, the art deco Design Exchange and the contemporary Aga Khan Museum.

Additionally, a number of free walking tours and special programs are planned for the weekend. We pick 10 must-see Doors Open Toronto locations.

Once the site of a seminary and a science laboratory, this historic Toronto building reopens this fall as the home of the University of Toronto’s John H. Daniels Faculty of Architecture, Landscape and Design. Enjoy a sneak peek and a view down the middle of Spadina. The Gothic Revival edifice now has a contemporary addition designed by NADAAA architecture firm. See website for details.

This Victorian-style building was designed by William Thomas and opened in Riverdale in 1864. First used as a jail, it was known as the Historic Don Jail until 1977. After years of stagnation, the building was purchased by Bridgepoint Active Healthcare to turn it into the hospital’s administrative building. See website for details.

After visiting the Aga Khan Museum, expand your knowledge of Islamic culture with a trip to Ismaili Centre. Built in 2014 by Canadian firm Moriyama & Teshima, this Flemingdon Park place of worship is most notable for the crystalline glass dome over the prayer hall. Explore the prayer and social halls, lounge, library and classrooms, as well as its spacious stone terrace and garden. See website for details.

Get a sneak peek of the Concert Hall housed in the Masonic Temple building ahead of its opening in June. An iconic live music venue, the six-storey building was built in 1917 and used as a popular ballroom in the 1930s, before acts like the Rolling Stones, David Bowie, Bob Dylan and Led Zeppelin took to the stage. After multiple ownerships, the building was purchased by Info-Tech Research Group in 2013. See website for details.

Touring a water treatment plant might not seem like the most thrilling activity, but this one at the very end of Queen East has a grandeur to it thanks to its art deco style. Built in the 1930s, the plant was commissioned by Toronto’s first and longest-serving public works commissioner, Roland Caldwell Harris, to glorify the mundane but essential filtering technology that makes cities possible. It’s now the largest of four water treatment plants in Toronto, providing an average of 400 million litres of safe drinking water each day. See website for details.

Though many DIY and live music venues have closed, here’s one that continues to thrive. For the past 12 years, Tim McCready has hosted some of the city’s most eclectic cultural events in his home-turned-performance-space, including his popular biannual house parties, summertime barbeques and New Year’s Eve events featuring local and international underground performers. Visit the house and see its history documented through concert posters, photographs and albums. Live musical acts perform during Doors Open. See website for details.

While this heritage building in the financial district is open to the public during regular business hours, Doors Open provides a chance truly explore and photograph all its nooks and crannies. Built in 1931, two years after the stock market crash of 1929, the building’s grand art deco-style architecture was a symbol for investment in Canada’s strong economy. Today, its vaulted ceilings and gilded details make it one of the most beautiful heritage spaces downtown. See website for details.

Built in 1888, Lakeshore Psychiatric Hospital marked a move away from large, monolithic buildings typical of hospitals to the Cottage Plan, a design style that emerged in the late 19th century to make psychiatric hospitals feel more homelike. Lakeshore Hospital had 10 cottages connected by an underground tunnel system. Join 90-minute guided tours that happen every hour to access the tunnel and learn about the evolution of psychiatric care in Ontario. Hear stories about how Lakeshore Hospital, which closed in 1979, played a role in our contemporary understanding of mental health. See website for details.

The historic John Street Round House, which now houses Steam Whistle Brewing, was built in 1929 as a repair facility for CP Rail’s steam trains. On a guided tour of Steam Whistle’s brewing facilities, learn about the railway’s historic site. Enjoy live music and samples (for those 19 years and older) of Steam Whistle’s Pilsner. See website for details.

You’ve likely sat in a seat here, but have you stood centre stage? Doors Open gives visitors the opportunity to stand in front of a microphone and take in a vantage point usually seen only by performers. Also, check out documents and artifacts from the venue’s nearly 125-year history. The building was given to the city in 1894 by Hart Massey, and the lobby was renovated in 1933 to give it its art deco look. See website for details.

See toronto.ca for schedules and a complete list of Doors Open Toronto events.