It hurts to write this in the midst of the opioid crisis we are witnessing, but there is a real. 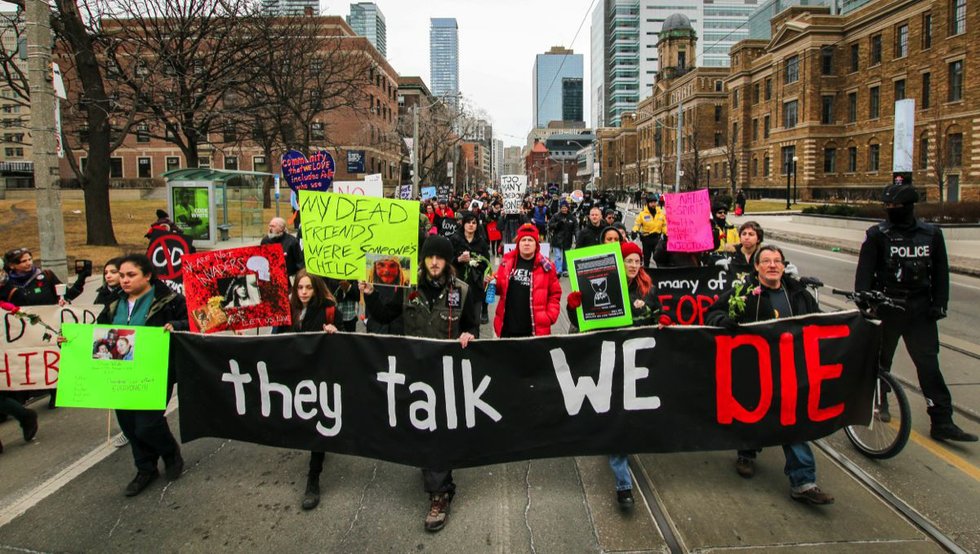 Some 1,475 people died from drug overdoses in Ontario in 2018 with the majority of deaths attributed to a drug supply increasingly tainted with fentanyl.

It hurts to write this in the midst of the opioid crisis we are witnessing, but there is a real parallel between climate change deniers and the people who hold that the war on drugs actually, on people who use drugs is succeeding.

Its the only way to explain the dithering, the tardiness of response, the lack of genuine concern by our civic leaders for people who are at risk of dying, and who actually are dying.

We have to change the way we perceive the uses of and social roles played by illicit drugs and by prescription drugs too, which have escaped from their sanctioned roles from one of disapprobation and moral judgment to one based on evidence and understanding. Then, and only then, can we control and address the consequences of their use.

Without a sincere acknowledgement of the urgency of the drug overdose death toll and an acceptance that the war on drugs has really been a costly and tragic failure, needless opioid overdose deaths will escalate.

We cannot wish it away, nor can we afford to neglect it.

While the public has started to show an understanding about what needs to be done, they are not being listened to by people who hold power. It underscores the lack of will on the part of our civic leaders to undertake an honourable retreat.

The public is ready for a new kind of action, and in some cases is demanding it. Torontonians are experiencing their own inconvenient truth regarding how to address the drugs issue. Now it is time for the city to catch up and show leadership.

There is no time to wait. We are in the midst of one of the most extensive and complicated public health crises ever witnessed. Greater, in fact, than SARS or West Nile, greater than motor vehicle deaths, greater perhaps than AIDS.

What we need to do is take action now.

All this will require money. And commitment. Both must be found. Quickly.

And that starts with the hiring of an overdose response coordinator. The sooner the better.

This person would ensure that the citys Overdose Action Plan is implemented in a manner that is both responsive and nimble. The existing plan is merely an outline overdose prevention activities need to be coordinated in order for them to be most effective.

We dont need to re-invent the wheel. We can count on the experience of other cities.

The strategy might well include plans for future supervised injection services in Community Health Centres and other sites where harm reduction programs are already active and there is a known drug-using community.

Or, non-medical, pop-up safe drug use sites, as in Vancouver, where people can use drugs, not just by injecting them. Sites should reflect the needs of their neighbourhoods and staffed with a mix of professional and peer workers.

There is no point in lamenting that action could have, should have been taken years ago. Analysis and apologies can come later.

Here are some things that need to be done immediately:

First off, listen to the members of the communities of concern. The city should convene a diverse group of outreach and peer workers and people who use drugs to solicit ideas of what will work. Indigenous knowledge can be profoundly useful here.

Hire additional outreach and peer workers and deploy them not just downtown but in other areas of the city. These workers will need coordination and support. Provide it.

Set up one or more mobile safe drug use services. They are in operation in Montreal and in parts of Europe.

Publicize the recently-passed federal Good Samaritan Law, which protects people from arrest who report an overdose to 911. It would help alleviate the distrust between police and people who use drugs, especially if police speak out in its favour.

Make naloxone more available and train more people in how to use it. It is already available free in most pharmacies. Make it a matter of policy that all first responders carry naloxone, including police.

Provide naloxone too all who need it. That means those leaving jail, discharged from hospital after an overdose, leaving treatment for an opioid dependency, or undergoing drug dependency treatment with methadone or buprenorphine.

Initiate a broad public education campaign to make people aware of the risks of drug overdose and how to mitigate them. Spokespersons in this campaign must include people with the lived experience of drug use.

Instruct that all public agencies to develop an overdose emergency plan. Hostels, shelters, supportive housing and drop-ins, libraries and parks and rec, as well as educational institutions, should all have strategy. Staff should be trained in CPR appropriate for a drug overdose.

Ensure that information disseminated about drug overdoses is accurate. Immediate information on what drug has caused an overdose may not be available, and it is foolhardy to speculate on what it may be. Speculation breeds panic. This must stop. What is important to emphasize is the strength of the drug, its unpredictability and if the drug is an opioid or a stimulant.

Initiate a program of drug testing. We actually learn very little about what drugs are currently causing problems on the street from coroners reports, which are 18-24 months out of date. But we can know a great deal from analyzing the actual drugs sold and purchased. This could tell us to what extent fentanyl and its analogues are mixed into other drugs and with which drugs on the street.

Find out what the drugs situation is across the entire city. Not only do we lack this information, but we lack the ability to make assumptions about what is going on in parts of Toronto outside the downtown. We have no clue, actually. And that is beyond regrettable.

Develop and disseminate real-time data. We need to measure the extent of accidental drug overdoses, where these events happened, what the drug was, and if possible where the drug was purchased.

Undertake realistic public education about risks of drug use in the current context. This will mean a new approach that is evidence informed and not stigmatizing. It must be developed and delivered by people who are credible.

Expand drug detox centres and ensure that they are more comprehensively staffed. They must be user-friendly (ie: for people detoxing from all substances and especially opioids). Detoxifying from opioids is a long and painful process, and people must be guided through it with compassion and skill. Abstinence is not the desired outcome for everyone.

And lastly, set up resources to help frontline harm reduction workers deal with the grief of witnessing so much death. This is – or should be – an employee health issue. But doesnt appear to be considered when so many of the employees working in the sector are part-time, contract or peer staff, with few if any benefits.

Good, decent people do not ignore the pain suffered by neighbours and fellow citizens. Politicians at all levels must not either.

Walter Cavalieri is director of the Canadian Harm Reduction Network.