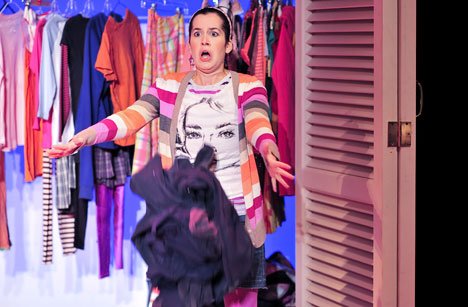 Ali has it all. She has the latest lululemon outfit, is part of most popular clique in Grade 5 and – wait for it – she’s going to meet Justin Bieber on the weekend.

But then, Ali does something that makes her feel like she’s in the headlight of an oncoming train.

She chooses to nominate the class outcast, Dolores, for a solo in the school show, instead of Ali’s best friend, Callie. Forced to get to know the shy Dolores, Ali discovers a person inside “the invisible girl.”

Michele Riml’s thoughtful, entertaining The Invisible Girl, the season opener at Lorraine Kimsa Theatre for Young People, deals with the all-too-relevant topic of social bullying as well as such topics as judging people by their looks and the exclusionary, hurtful nature of “in” groups.

The theatre first presented the play in 2004, but this new production is far stronger in its visual and theatrical punch than that earlier version.

Performer Amy Lee uses her expert clown skills – she’s part of the duo Morro and Jasp – to make a strong connection to the audience as she moves from confident, unconsciously haughty Miss Popularity to an outcast herself, rejected by her group because of her association with Dolores. Lee’s heart is always open to the characters, and she shares her insights with us.

Designer Camellia Koo’s inventive idea is to have the action spilling out of Ali’s huge, messy closet, with the hanging clothes used to tell us the day of the week (stitched onto underwear) and to stand in for many of the other characters. Ali’s group is defined by trendy designs, of course, and Dolores is a stodgy, utilitarian coat, which Ali compares to an extinct animal. The adults, Ali’s mother (“my mother of the perpetual frown”) and teacher, are videos by Romeo Candido, who also turns some of Ali’s theories and the Tweets back and forth between Ali and her frosty friends into huge projections shown above the closet.

Aquino works her directing magic yet again, giving life to all these figures without making the message preachy. There’s a powerful moment when Ali realizes that the schoolyard is filled with invisible people, not just Dolores, whom she’s never paid attention to before. Lee’s Ali steps out of Kimberly Purtell’s bright lighting and the coloured set into an area of blackness, experiencing herself what it’s like to be ignored.

The script could use some cutting and its points made more concisely, but with all the talent involved in the production, this Invisible Girl is worth seeing.