The kiss and the double standard 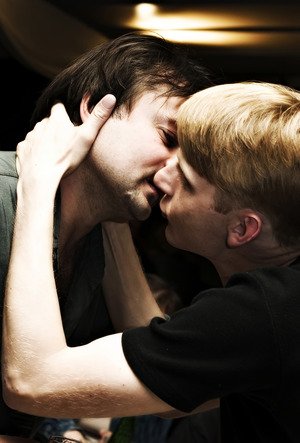 The backlash against American Idol runner-up Adam Lambert was inevitable, I guess. User-friendly Clay Aiken’s one thing, much more threatening Lambert’s another. It’s the difference between gay and queer.

Also relevant, in the wake of the American Music Awards censoring of Lambert’s kiss with a fellow performer is the difference between how ABC thinks audiences will react to boy-on-boy action versus their lapping up, if you will, of a similar girl-on-girl scenario.

Who can forget Britney’s lip lock with Madonna at the 2003 American Music Awards MTV Awards. Was it censored? No Way. Why? Because when girl’s do it, it’s a quasi-pornographic, but totally mainstream-approved spectacle that rocks the male gaze. Lambert’s kiss is way more transgressive and, let’s face it, guys think it’s icky.

Not that in real life queer guys are more radical than queer girls. Lesbians can scare the shit out of people. But they have to be real lesbians and Britney Sprears and Madonna don’t exactly qualify, regardless of their individual sexual resumes.

What’s more important, from a media literate point of view, is that girls getting sexual together, whether dancing or rubbing up against each other, is so prevalent in mainstream representation – whether in movies, music videos, or just college girls going wild for YouTube – that it’s almost become perceived as part of everyday sexuality, close to invisible, in fact.

Note, too, how conservative the big three American networks have become. David Bowie used to pull off Adam Lambert-type stunts all the time in his 70s and 80s heyday and British television didn’t flinch. But ever since CBS was fined $550,00 by the Federal Communications Commission for Janet Jackson’s notorious wardrobe malfunction at the 2004 Superbowl – a case still being adjudicated by the U.S. Supreme Court – the networks are taking no risks.

Credit Lambert for calling out ABC for their discriminatory practice of censoring two boys kissing, to say nothing of their cancellation of his appearance on Good Morning America the next day.

In a climate that breeds this kind of reaction, no wonder gay marriage rights are circling the drain in the U.S. [rssbreak]