The most unparliamentary language

Two politicians duke it out 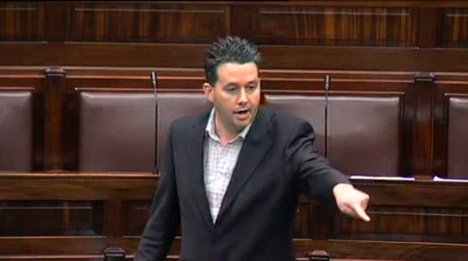 The Irish Parliament is back in the news, but for all the wrong reasons: two politicos duked it out during a debate on a social welfare bill. Paul Gogarty had enough and he swore at Labour’s Emmet Stagg.

This is priceless: “With all due respect, in the most unparliamentary language, fuck you Deputy Stagg. Fuck you!”

Now forever captured on YouTube, Gogarty’s statement came moments after Labour members started heckling him. The video clip doesn’t show exactly what set off Gogarty. But to his credit, he apologized right after his F-U too bad he couldn’t edit his cursin’ from his online legacy.

Evidently, this isn’t Gogarty’s only brain fart. In an interview with a Green magazine, he stated the members of Fianna Fail (read: Ireland’s Repulican party) are “cute hoors” and he hopes in the next election they get a nice “drumming.”

Oh, it don’t stop. On why his foot is so often embedded in his mouth? “For me, because I have a journalistic background, I am prone to making mistakes,” he said in the same interview. Huh? So being a journalist gives you some kind of out from being dumb?

But here’s the strangest non sequitor. In an interview with Hot Press he said he thinks he may be 25 percent gay. He didn’t elaborate on his three-quarters’ worth of heterosexuality.

If this week’s clip doesn’t seal it, the rest of Gogarty’s inanity wraps it with a bow: Ireland has some weird Green Party leaders. But maybe we should be happy Elizabeth May makes the headlines for all the right reasons.