Strong emotional connection missing in follow-up to I, Claudia 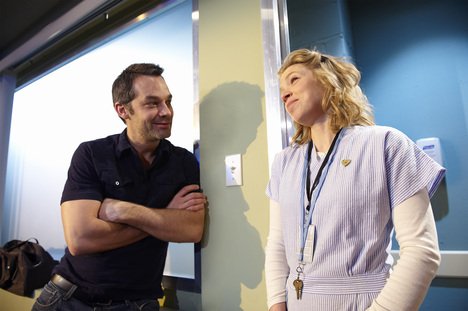 A woman is recovering from a stroke in an anonymous hospital room. Her two adult children, a nurse and another patient occasionally pop through the curtains to see how she’s doing.

That’s the basic set up of The Patient Hour, Kristen Thomson’s follow-up to her hugely successful I, Claudia.

That earlier play featured a series of strong characters and monologues, all performed by Thomson herself. She remains offstage for the new piece, but employs the monologue technique again with a twist. When the four actors in the play address the sick woman, they stare directly at the audience. We are the patient and – to emphasize one of the puns Thomson’s using – we’ve got to be suitably patient to take in all the work’s complexities.

It’s worth the wait, although it takes a while to settle in and get our bearings in this production, directed with maximum suggestiveness by Chris Abraham.

Julie Fox’s set effectively recreates a sanitized hospital room, privacy curtain, mysterious closets and all. Rebecca Picherack lights the set with such skill that each tableau takes on a different mood. At times you’ll swear you’re staring at a recreation of a Christopher Pratt painting, humming with menace and portent.

The script is promising, but I wish the characters had a bit more history and depth. Some plot points don’t make sense, and while Thomson isn’t tugging on our heartstrings, a bit more emotional connection with the characters would help.

Todd Thomson (the playwright’s brother) grounds the work with his likeable, scratchy-voiced portrait of the patient’s son, Charles, a lonely mechanic with a jokey streak. Liisa Repo-Martell brings a fresh approach to her line readings as a nurse named June, who used to be a potter and has lots of personal baggage. Whether these two are going to strike up a relationship forms the heart of the piece – and, in a way, its main tension.

Less successful are two other characters, the patient’s daughter, Laura (Waneta Storms), who’s just been released from prison, and an unnamed female patient (Patricia Fagan), who’s just given birth to a child. Both are fine – Storms brings a stony strength to her performance – but their motivations seem a little vague.