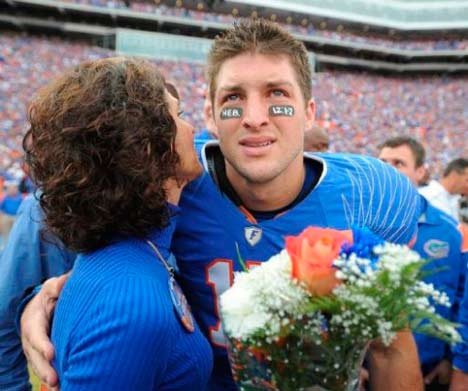 So, the Super Bowl’s gone anti-choice. Well, not exactly. But the mega sports TV production has accepted an ad from an anti-abortion group featuring the 2007 Heisman Trophy winner, Florida Gators quarterback Tim Tebow and his mother Pam Tebow, an active member of the right-wing group Focus on the Family.

Pam Tebow, an evangelical Christian, had contracted a from of dysentery and was being treated with some heavy-duty drugs. When she discovered she was pregnant, her doctor informed her that the drug therapy put the fetus in serious danger and suggested that she terminate the pregnancy.

Though no one’s seen the ad yet, the message, doubtless, will be something like, “If I’d done that, my beautiful son the football star wouldn’t be in the world with us.”

Canadians who watch the big game won’t see the ads, since CTV simulcasts and runs home-grown advertisements. But soon, satellite owners will and pretty soon the rest of us will get access via YouTube.

Either way, the audience for the spots will be huge. Personally, I don’t have a problem with political agendas making their way into advertisements on TV events guaranteed to attract so many eyeballs. But the fact that it’s an anti-abortion group taking advantage of CBS’s reduced ad rates – TV ad buys just aren’t what they were in the days when Michael Jackson was doing Pepsi ads for the big event in the 80s – speaks to the anti-choice buying power.

This is a group that gets the priesthood to do its tub-thumping for them every Sunday from the pulpit – sometimes even collecting money in the name of God – and can advertise its point of view and its fundraising efforts on signs situated on tax-free Church properties. Pro-choice groups don’t have that advantage. If they’re able to counteract with their own Super Bowl ad, it will speak to their real people power.

Speaking as someone who doesn’t think of medical doctors as omnipotent, I actually appreciate the fact that Pam Tebow didn’t take her doctor’s advice and delivered what she’s calling her “miracle baby.” Ironic, isn’t it, that a right-wing group would be sponsoring such an anti-establishment message.

As it is, had Pam Tebow taken her pregnancy to a women’s clinic, or something like the kind that Henry Morgentaler runs here in Toronto, she would have been given proper counselling about all her options, instead of being “pressured” into an abortion.

I’m glad Pam Tebow got to make her choice. I just wish she’d allow all women to make their choices, too.[rssbreak]