NOW MagazineNewsThe Taming Of The Shrew

The Taming Of The Shrew 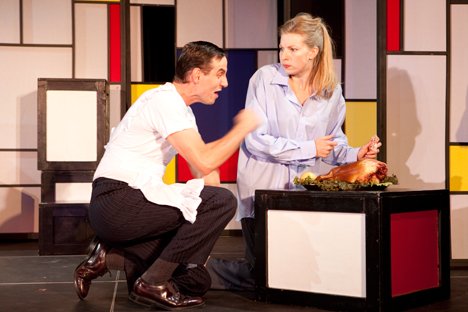 Though a comedy, Shakespeare’s The Taming Of The Shrew always poses the problem of how to handle the central relationship between Katherina and Petruchio.

She’s the outsider both in her household and the town, the sharp-tempered woman everyone avoids he’s the newcomer drawn to the match first by her wealth and then by her feistiness. At the end of the play, Katherina has a speech of obedience to her husband that can, in some productions, make us feel uncomfortable with its overt subjugation and misogyny.

Director Brett Christopher sets his production in the Mad Men-ish 1960s, when sexism was a given. He’s cast well in the key roles: Maev Beaty and Andy Pogson have a chemistry that allows the sparring couple a means to change their relationship over time.

Beaty gives us a Katherina who desperately wants affection from her father Baptista (Michael Rawley), who instead funnels all his attention to his younger daughter, Bianca (Katryn Harpur) her anger at rejection fuels Katherina’s behaviour.

Pogson’s Petruchio is also headstrong at the start and determined to cross Katherina as a means of wooing her. The pair, equally strong in their initial encounter, convince us that there’s an initial spark between the two that can turn into something deeper. Later, she’s clearly hurt when it looks like he won’t appear on their wedding day, while his asides reveal that he has a warmth and concern for the woman he’s married.

The actors fan that sense of mutual caring and compassion over the course of the second act, even if some of the text still smacks of control and dominance. By the time of their journey to Bianca’s wedding, they’re on the same page, playing what both know is a game about who’s in control.

And while neither the production nor its setting fully resolves that last speech of submission, Beaty gives it vibrant life, suggesting the power-sharing she recognizes in their relationship. Pogson’s response reveals that his Petruchio is touched by the sentiment under the words.

Christopher and his cast give a clear reading of the text, even if some performances are too broad and vary in quality. The always reliable Richard Alan Campbell knows how to bring both verbal and physical humour to his several roles, and Andrew Sills, as Petruchio’s servant, Grumio, shows a comic skill he’s not been called upon to use in his Toronto performances.

Alex Furber has charm as the lovestruck Lucentio, who eventually ends up with Bianca. As Lucentio’s servant, Tranio, Tyler Murree has a fine sense of timing but occasionally goes for shtick. Rawley’s paterfamilias is demanding, mercenary and implacable, just right for the role.