NOW MagazineNewsThe trouble with our aid

The trouble with our aid

Behind international efforts in Haiti lies a harsh truth: misdirected trade initiatives have condemned the country to poverty 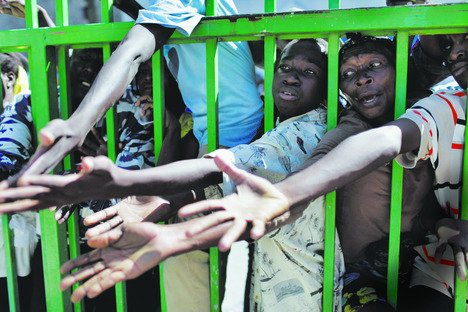 People beg for food and water outside a supermarket in Port-?au-?Prince. Troops

People beg for food and water outside a supermarket in Port-?au-?Prince. Troops, doctors and aid workers are flowing into Haiti, but when we step back from the current crisis, will the international community cancel Haiti’s debt? PHOTO: CP/Ariana Cubillos

Kudos to you, Stephen Harper, for not messing up on implementing Canadians’ desire to lend a hand during this horrific crisis in Haiti.[rssbreak]

But before you try to turn the blessings for responding to this emergency into a political asset, we need a little reality check. This crisis actually highlights more than ever why we need to put our anti-prorogue asses on the line on Saturday (January 23) at 1 pm at Yonge-Dundas Square.

Let’s face it, the government’s response is mirrored in almost every country in the world. In our case, it’s somewhat tinged with irony, given the ominous defunding of KAIROS late last year. Compassionate motivation is great, but we all know that rebuilding in Haiti will be a very long-term process.

How aid is delivered over this next critical period will colour and infuse the recovery effort for years to come. Will assistance and money allow the local population to emerge into self-sufficiency or condemn them to more stunning indignity and impoverishment?

One of the Canadian organizations most concerned with aligning economic development dollars with human rights and appropriate trade policy is the faith-based coalition KAIROS, which, including its predecessor orgs, has focused its expertise and advocacy in this area for 35 years. Until recently, our government supported that work.

“When we step back from the immediate crisis and try to get perspective on why there are no building codes in Haiti and why people are so poor, that’s where the KAIROS research is so important,” says United Church Caribbean program co?ordinator Jim Hodgson. He’s working through local networks to make sure his organization’s relief dollars are connected and coordinated with others as much as possible.

“Canada and the U.S. have pushed market reforms that have dumped cheap rice and sugar and weakened Haitian producers. We want policies that make people want to stay in Haiti and that make small-scale farming doable. These misdirected trade initiatives are some of the issues that we and KAIROS will continue to work on.”

The announcement in late November that KAIROS would no longer receive government funding was the start of a quickly unfolding series of Conservative government actions that have rattled Canadian values to the core.

Next came Canada’s shameful Copenhagen climate performance, followed by the Afghan detainee torture issue and cover-up, and finally the proroguing of Parliament itself. These add up to a country that is radically off-course, our Haitian mission notwithstanding.

True to its mandate, KAIROS has stepped up its campaign to get Haiti’s debt cancelled during this crisis.

“It’s ludicrous for creditors to demand payment of debt right now,” says KAIROS’s John Dillon. “The government needs those dollars freed up for use on recovery.”

But cancelling the debt is most important for freeing government from the yoke of these destructive, dictated policies. Haiti’s current remaining debt, according to Dillon, is only about $890 million, mostly owed to the Inter-American Development Bank.

Last year, $1.2 billion was forgiven, but only after two years of structural adjustment policies. These favour export-oriented business like mining and sweatshops over the kind of local development needed to overcome, not further entrench, the country’s colonial legacy. (Go to the KAIROS website to offer your support for debt relief.)

We all know Canada cannot alone shoulder the blame for Haiti’s stunning poverty. But we could be part of a better future. “One can only hope that the Canadian and other UN troops in Haiti are not used to stifle independent community rescue and rehabilitation initiatives,” says Ottawa consultant Bob Thomson, who has carried out evaluations of Canadian NGO and government rehabilitation projects in the wake of earthquakes in Mexico, Colombia and Chile. “Assistance has to be directed at building community and civil society capacity and not reinforcing the undemocratic government installed in the 2004 coup d’état.”

We need a better-behaved government in Canada to make sure that the right policies in Haiti get the support they need. Let’s deliver that message to Harper on Saturday.