The city's latest cycling infrastructure plan adds 25 kilometres of new bike lanes, along with the promise of more public space and patios 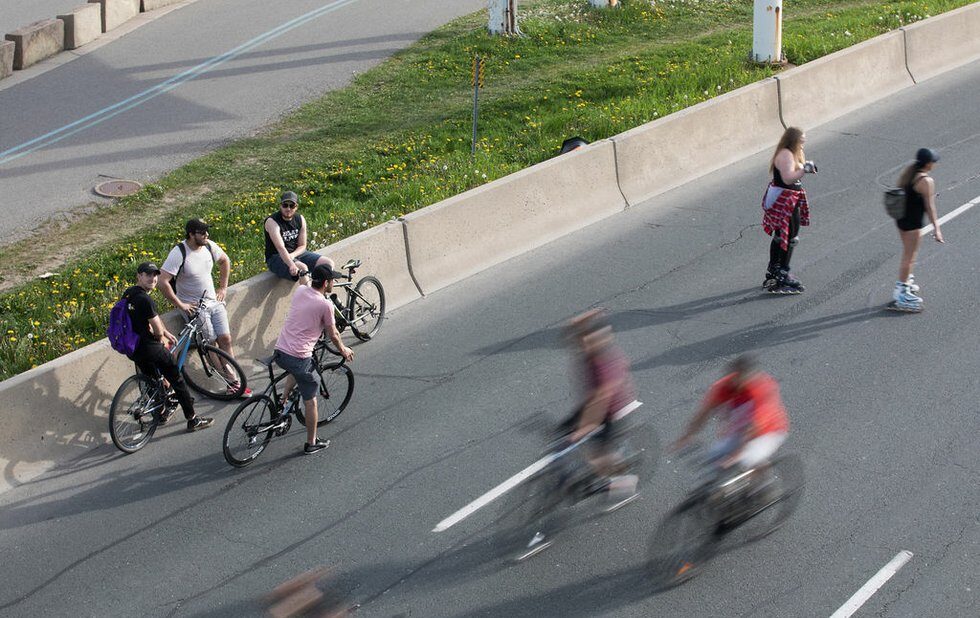 The city is accelerating plans to build additional bike lanes in order to give Torontonians more and safer options to commute as businesses begin to reopen during the pandemic.

On Monday, Mayor John Tory announced that a staff report to be considered by city council later this week is proposing to expand the cycling network as part of the ActiveTO program, a recently announced project that aims to create more space for cyclists and pedestrians.

The plan proposes an additional 25 kilometres of new bikeways, which amounts to a total of 40 kilometres of new on-street cycling lanes to be installed this year. It will also be flexible in case lanes need to be adjusted in accordance with changing traffic volumes and the needs of local residents and businesses.

“We need more bike infrastructure to help people move around the city as the restart gets underway,” Tory said in a statement. “We are working together to push ahead with expanding our bike network to help people get around the city, to help frontline healthcare workers get to and from work, and to make sure we have a safety valve for the TTC.”

According to city traffic data cited in the report, many are choosing cycling over riding transit, with typical cycling volumes in the city rising as the weather gets warmer.

If approved, the new lanes will be installed along Bloor and University (through Queen’s Park), giving relief to the two subway lines and providing more space on the TTC for those who need it.

Here are the proposed cycling projects:

The new bike lanes will be built quickly using temporary installations and by repurposing curb lanes with minimal change to the existing street design. The cycling network will connect to hospitals and health-care facilities for frontline workers.

The city has also proposed a $4-million investment into the creation of more public space and patios, and to pilot active transportation infrastructure on Danforth from Broadview to Dawes later this summer.

In addition, the report proposes an acceleration of the Bloor West Bikeway Extension and plans to address other gaps in the network, including in North York and Scarborough.

“We know how to make our roads safe for cyclists,” said councillor Mike Layton in a statement. “We know that we need to build an expanded, city-wide grid of protected bike lanes, so that people can get to work and across the city without fear. Along with community groups and local residents, we have been advocating for a protected bike lane along these routes for some time. Now, it’s clearer than ever that we need to act – not just to protect cyclists, but to facilitate physical distancing and reduce virus transmission.”

City councillors will be voting on the plan this Thursday. If approved, lanes will be installed as early as July 1, with Bloor Street and University the top priorities.

ActiveTO, which was developed by Toronto Public Health and Transportation Services, is also planning to install over 50 kilometres of “quiet streets” throughout the city, providing shared space for pedestrians, bikes and slow, local traffic.