NOW MagazineNewsWhat’s Toronto the Good got against sex work?

What’s Toronto the Good got against sex work? 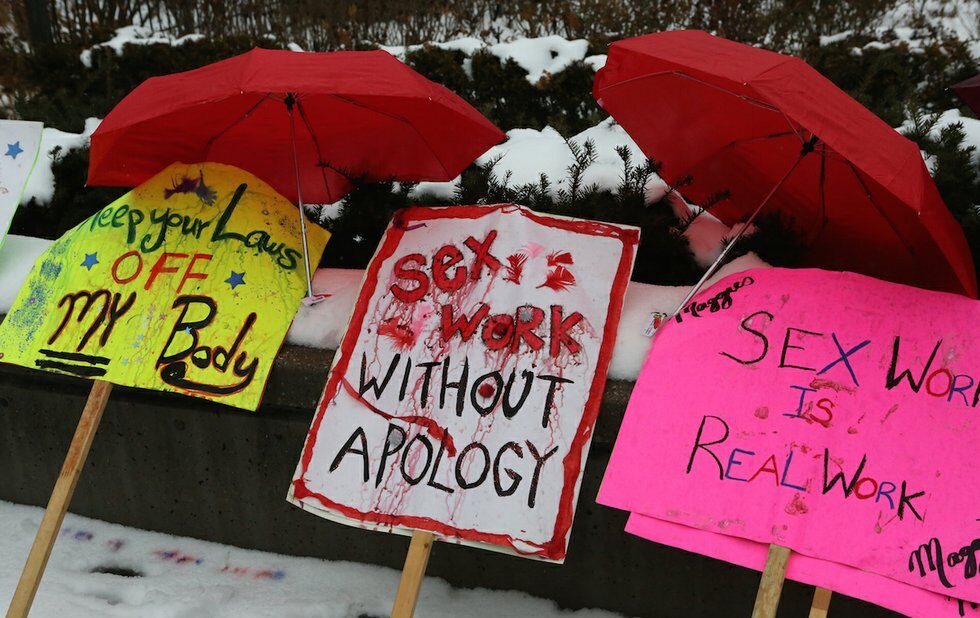 The city of Toronto can’t seem to overcome its long-standing bias against sex.

There are 25 body rub parlours, 575 body rub workers, 389 holistic centres and 2,167 holistic practitioners licensed by the city. According to the groups, MLS has issued 1,604 notices of non-compliance to holistic centres between 2014 and 2017 for everything from compulsory medical checks for female workers to fines for wearing certain clothes. That’s an increase of more than 200 per cent over that time.

City staff heard from workers, lawyers and members of the public at March 20 consultations held at Scadding Court. A number of body rub workers, some of whom provide sex services, expressed concerns that human trafficking is being conflated with the sex trade to over-police the trade.

“They use trafficking as an excuse to check on us,” said Lisa, an Asian sex trade worker who spoke through a translator at the Scadding Court meeting.

A 2014 report by the auditor general of Canada raised the alarm about human trafficking. Elene Lam from Butterfly says the resulting panic – and Harper-era laws criminalizing those who seek sex services and preventing migrants from working in the sex industry – has made it appear that all sex workers are victims, denying them agency over their lives.

“Abuse, racial profiling and over-policing by law enforcement” are the results of this new wave of criminalization and the rescue approach, according to a 2018 report authored by Lam. The group says raids by municipal inspectors and police in the name of human trafficking resulted in the deportation of 23 sex workers last year.

“Sex work is regulated with tools from the Victorian era.”

Nabila Qureshi, a lawyer with Income Security Advocacy Centre, says enforcement by MLS leaves workers, many of whom don’t speak English or know their rights, without support.

“We need an education approach and a focus on understanding rights and obligations,” Qureshi told the Scadding consultation.

Further complicating the issue is the fact that body rub parlours are only allowed in industrial areas of the city, while holistic practitioners are allowed in any commercial area. The zoning prevents some people from working where they want and need to work, says Lam. Since 2005, holistic practitioners must also be members of one of 37 professional holistic associations in Toronto.

Council has asked city staff “to stop licensed holistic centres from offering services outside of the parameters and conditions of the licensing category [and] use an anti-human trafficking lens to review the bylaw.” Council has also asked staff to “examine the feasibility of adjusting the cap on body rub parlour licences.” A report will be prepared by May 2019.

But the ramped-up enforcement has raised the possibility of lawsuits alleging a violation of the city’s sanctuary policy – not to mention violations of the provincial Employment Standards Act.

Mariana Valverde, Professor at the University of Toronto Centre for Criminology & Sociolegal Studies, says MLS staff are working closely with immigration and border officials to deport workers in “a serious breach of the city’s sanctuary policy,” which ensures immigrants without permanent status have access to city services.

Rod Jones, MLS director of bylaw enforcement, states in an email reply to NOW that bylaw officers do not investigate immigration matters.

“While the enforcement team continues to work with many stakeholder groups representing sex worker rights, the city also cannot regulate the sex industry. Material gain from the providing of sexual services is a criminal offence under the Criminal Code of Canada, which is investigated by the Toronto Police Service.”

Jones adds, “The city has established a working relationship with Butterfly (Asian and Migrant Sex Worker Support Network) to better understand the issues facing these workers. This includes using feedback to conduct a review of how the city enforces the bylaw.”

Kerry Porth, a sex work policy researcher with Pivot Legal Society in Vancouver, says Vancouver had to take action to regulate the trade after many marginalized sex trade workers were killed. The 2010 Missing Women Commission of Inquiry headed by Wally Oppal made several recommendations, including that police and bylaw enforcement officers in particular undergo training on sex work. The Oppal Commission also called on Vancouver to hire two community liaison workers “who have experience in the survival sex trade,” and to make a plan to ensure safety for street-based sex workers. These workers train city staff on sex worker issues, address gaps in services for sex workers and work to provide housing and shelter to those doing sex work. The resulting model on regulating establishments that offer sex services is more sex-positive.

Vancouver’s Healthy City Strategy states that when dealing with complaints, the “safety, health and rights of individuals engaged in sex work will be respected. When individuals involved in sex work are the subject(s) of a complaint, staff will engage the sex work social planners to assist with resolving the situation where appropriate and/or connecting them to appropriate community organizations. Adult consensual sex work is in itself not a bylaw violation.”

Says Porth, “We don’t have raids here, because it was recognized that indoor spaces are actually much safer for sex workers to be working in.”

Porth stresses that sex workers and their organizations need to be at the centre of developing new guidelines, as was done in Vancouver, or risk driving the trade dangerously underground and see the numbers of missing women rise, which happened in British Columbia.

“The same can happen with migrant workers. They can start to disappear and nobody would know about it. Instead of running around with your hair on fire, you have to leave the politics of disgust at the door and do the work and listen.”

But centering the safety and employment rights of sex workers is still a struggle for Toronto the good.

“Sex work is regulated with tools from the Victorian era,” says Valverde.

Monica Forrester, program coordinator at Maggie’s Toronto Indigenous Program, told a March 12 forum on harm reduction in sex work at Ryerson, that sex workers have been pushed to the margins since the former Harper government’s anti-prostitution laws went into effect in 2014. The anti-trafficking focus, she says, “has created so much violence for sex workers.”

Councillor Kristyn Wong-Tam, meanwhile, worries that the focus on enforcement of body rub parlours and holistic centres is distracting people from the real issues these marginalized workers face.

“To talk about human trafficking is actually disingenuous. At all the consultations, not a single worker is saying they have been trafficked. They want employment standards and protections.”

She acknowledges that most of the push-back is coming from councillors in the suburban wards, and says council “must approach this issue without stigma.”