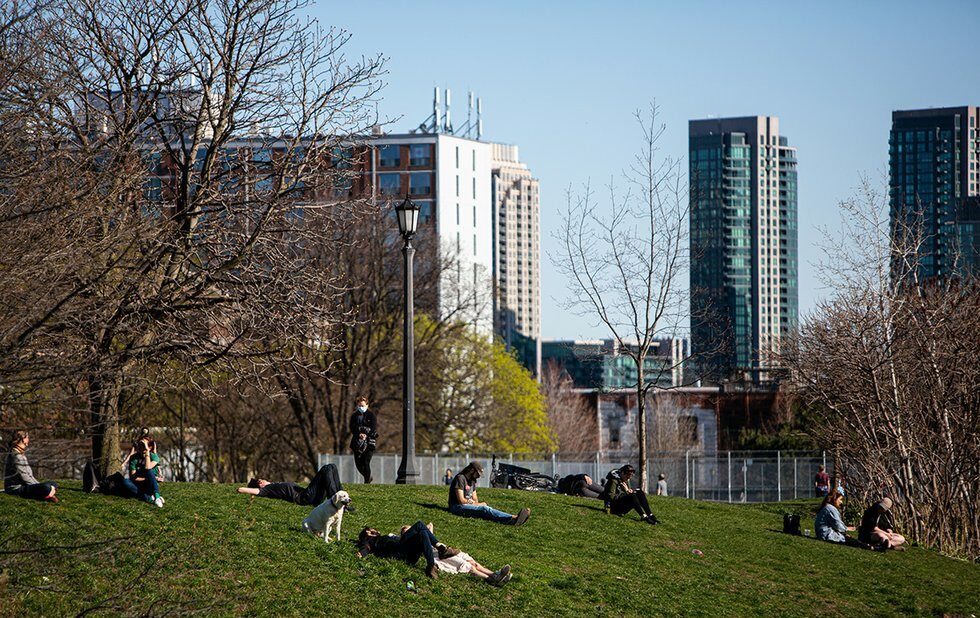 People enjoy a warm afternoon in Trinity Bellwoods park while keeping distance on May 1.

The city will close and modify 50 kilometres of streets for pedestrians and accelerate cycling infrastructure as coronavirus lockdown measures ease.

Toronto Public Health is shifting advice from urging people to stay home to telling people it’s okay to go outside, but to practise physical distancing.

As the number of new COVID-19 cases decreases and the weather becomes warmer, the city is working on plans to make it easier for residents to walk, bike and line up on sidewalks while keeping a safe distance.

Toronto has already begun closing some traffic lanes in front of “hot spots” on sidewalks that attract lineups in 10 locations as part of its CurbTO initiative. There are 80 more lane closures in the works.

Earlier in the day, Ontario Premier Doug Ford announced that garden centres and hardware stores would reopen on May 8 and 9, respectively, and that non-essential retailers with street entrances can open for curbside pickup on May 11.

The mayor said the city will use “appropriate common-sense measures” to address lineups on streets. He also said many stores have shifted to online sales, which would make it less likely that so many people will need to line up in front of brick-and-mortar shops.

Toronto will also roll out a plan called ActiveTO to create more space for pedestrians, cyclists and transit riders. Tory noted that pedestrian and car traffic has dropped during the pandemic, but bike traffic has remained steady.

The city will add 50 kilometres of “quiet streets” by closing some streets for local car traffic, cyclists and pedestrians. Streets in areas that lack park space will close and areas close to large parks will also restrict car traffic to alleviate congestion.

Transportation staff and public health will work together to completely close some major roads adjacent to trails and areas that attract crowds on weekends and holidays on a trial basis “as a matter of safety for pedestrians and cyclists,” Tory said.

“The beginning of this war is ending,” the mayor added. “It’s not over yet but it is nearer to the end than the beginning. But there’s a long road ahead of us to get back to anywhere near our normal lives.”

Toronto will accelerate and expand its 10-year cycling plan – which has been approved by council – to boost cycling infrastructure. Some cycling routes will mirror TTC routes as many people will still be wary of riding public transit as the city reopens, Tory noted.

Toronto’s medical officer of health Eileen de Villa echoed the mayor’s comments, adding that active transportation such as walking and cycling will be key to the city’s recovery.

“The risk for becoming infected with COVID-19 while passing someone on the street, walking trail or bike path is low. So when you are out running or walking about, please step aside or pass others quickly and courteously,” she said. “We know that mobility is key to recovery, this is why as our recovery process begins we need to keep Toronto moving.”

De Villa said the city has started to see the number of new COVID-19 cases slowly decrease since the lockdown measures began seven and a half weeks ago. Today she reported 217 new COVID-19 infections in Toronto and 35 new COVID-19-related deaths since the previous day’s report.