Toronto Coach Terminal could use some inspired ideas 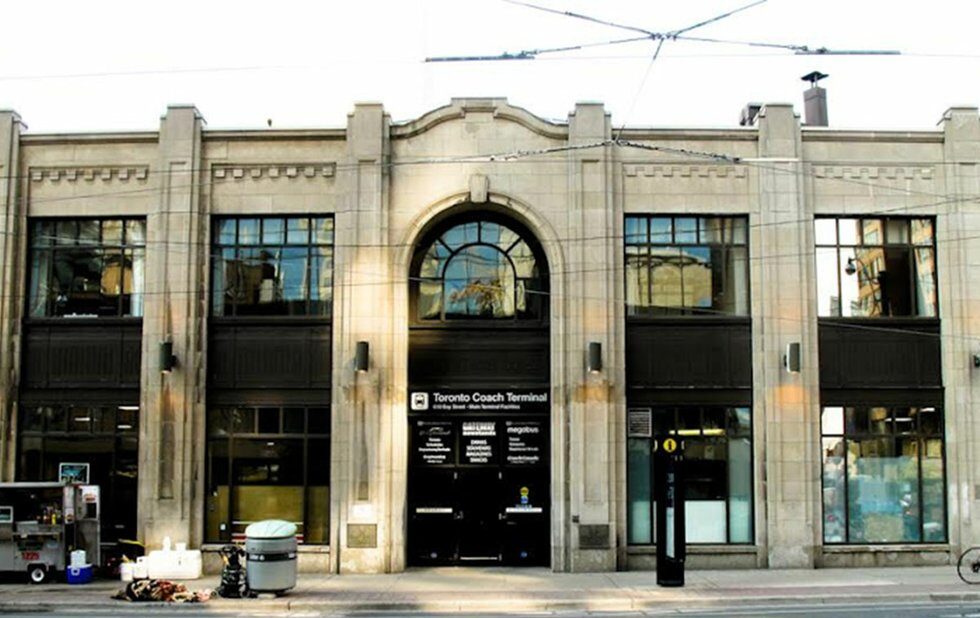 uninviting waiting room on a forgotten corner in the city.

Bay Street’s art deco coach terminal has become a cold, uninviting waiting room on a forgotten corner in the city. 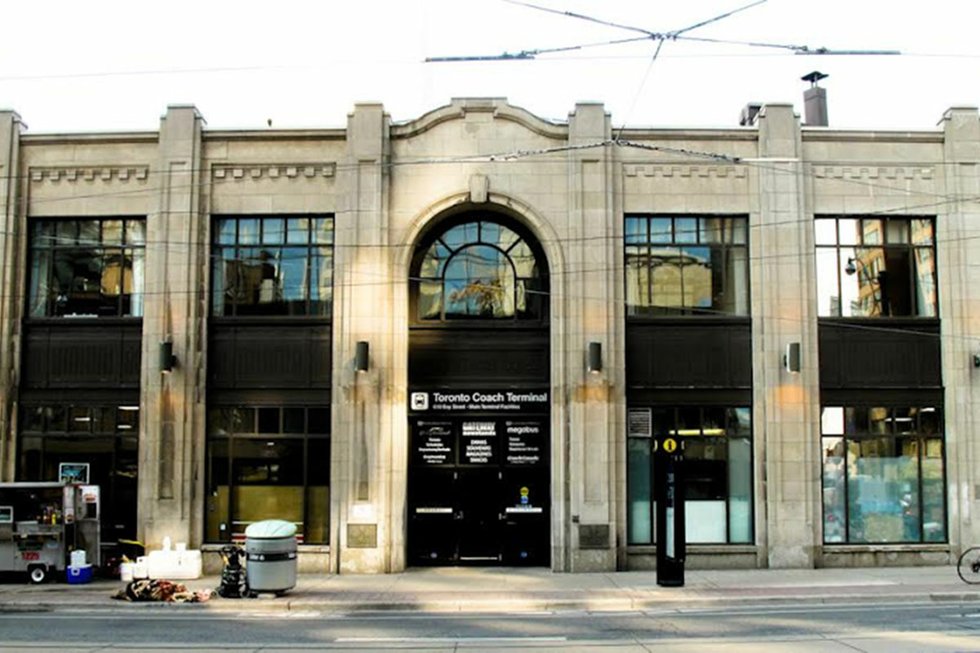 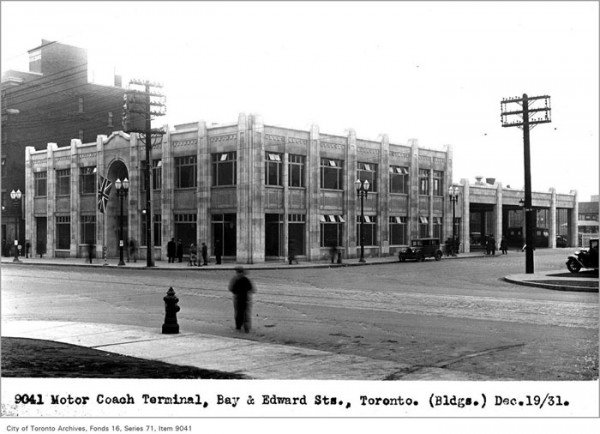 When it opened its doors in 1931, Toronto’s Coach Terminal on Bay Street was an elegant welcome to those arriving to the city’s core, sending off its buses in comfortable and smart style.

With soaring ceilings, decorative travertine walls and art deco chandeliers, the Coach Terminal was a sophisticated space for arrivals and departures. Bus travel was a central mode of transportation – Toronto did not even have an airport yet. Designed by architect Charles Dolphin, whose list of Toronto projects includes the Bloor-Yonge subway station and Postal Delivery Building (now the Air Canada Centre), the Coach Terminal remains a fine example of uncomplicated yet handsome art deco style.

But as car and air travel became easier and bus transportation lost its appeal, the terminal began its slow decline. The structure has undergone some odd renovations. The internal walls were demolished in the early 1980s (leaving only the facade of the original building) to accommodate renovations of the bus bays. In 1990, the main terminal building was upgraded to create more seating and a restaurant (since closed) added upstairs. 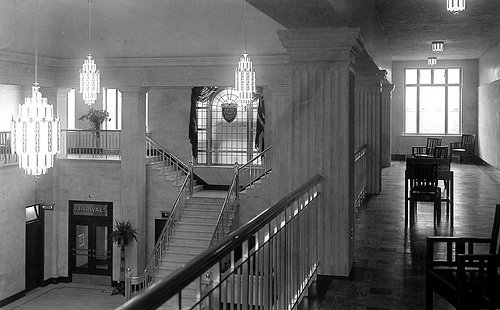 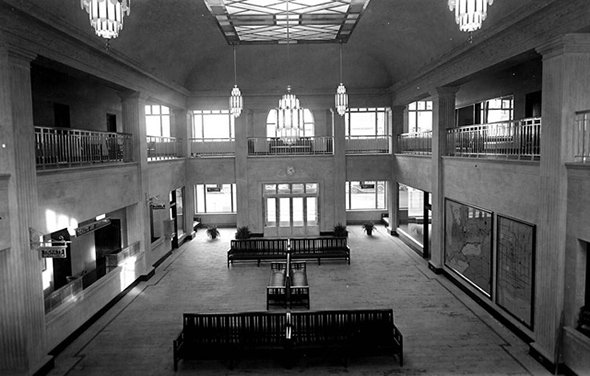 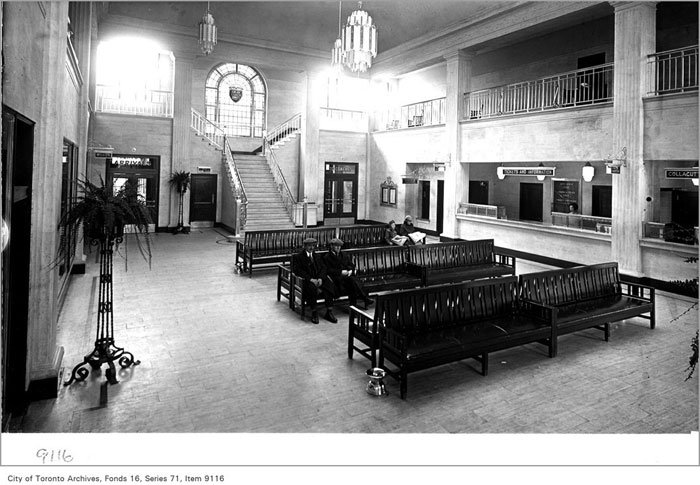 Today, the building stands as a sad, cold, uninviting waiting room on a forgotten city corner.

With the planned consolidation of bus terminals by Metrolinx at the new Union Station, the Coach Terminal is in great need of some inspired reuse.

On a recent chilly Saturday morning, the Architectural Conservancy of Ontario (ACO) NextGen committee brought together emerging design professionals and students in an exercise to breathe new life into the tired terminal.

Participants began their day with a walking tour led by Tatum Taylor, a project manager with ERA Architects. Taylor provided an insightful context for the terminal as part of a then multi-ethnic, vibrant shantytown referred to as the Ward, which was home to immigrants from Europe and Asia as well as freed American slaves.

Systematically demolished by the city as a way to “clean up” the area, the Ward disappeared by the 1950s. This backstory provided participants with inspiration for how to respect the terminal and the Ward’s legacy in its reimagined purpose.

Inside the rooms of nearby Campbell House, several teams enthusiastically worked away on their plans. A panel, which included Robert Allsopp and Brian Brownlie of DTAH, Steven Bell from the city’s Heritage Preservation Services, Sarah Hill from Lord Cultural Resources and Steven Ziegler from Downtown Yonge Business Improvement Area, judged the submissions.

While each is unique and innovative in its own way, all of the proposals appreciate the abundance of retail in the area and instead seek to restore the terminal in ways that would capture its place in the history of the Ward and as a place where everyone is welcome to come and go.

For example, many of the plans propose to celebrate the history of multiculturalism in the area through converting the space into a local food market.

Important, too, was reimagining the space as a cultural hub for those living in the downtown core. Theatre space, music venues, green space, rooftop community gardens and artists’ studios – all increasingly valued by today’s young adults – were touched on as lacking in the area.

But the plans also recognize the need for these public-good developments to make economic sense, and include office space and condominiums on the adjacent parking lot to help finance the terminal’s restoration and re-use.

It is exciting to know that our city’s emerging thinkers and planners are deeply interested in respecting our historical structures and honouring the forgotten lives of those who came before us rather than making space for high-rent retail and restaurant clones. While understanding the reality of economic pressures, their optimistic ideas give us hope that our city’s developmental focus will shift for the better in years to come.