Op-ed: Toronto council looks the other way on anti-Black racism 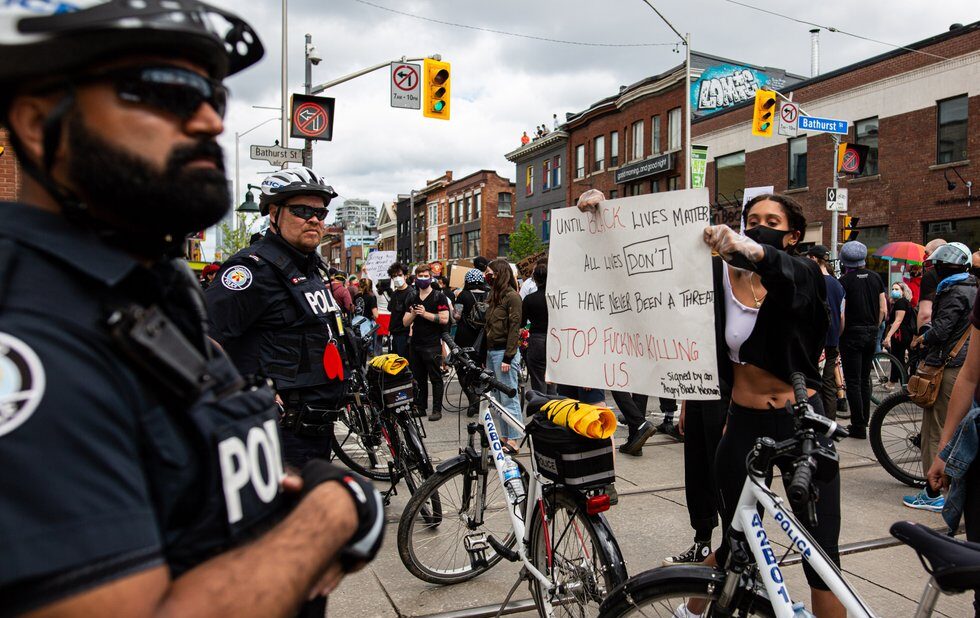 A protestor confronts police during a demonstration against anti-Black and anti-Indigenous racism on May 30.

Toronto city council had a chance to make a statement on Monday. Instead, they turtled on a proposal to cut the $1-billion-plus police budget.

There had been much talk in the weeks leading up to the vote about the need for transformation in policing. But anyone watching the deliberations online couldn’t help but be struck by the disconnect: it was mostly white faces making a decision on an issue that affects mostly Black and Indigenous people and people of colour.

Oh, they all spoke alright – about the “dozens” and “hundreds” of emails and calls they had received from Torontonians and the careful listening they had done on the subject of anti-Black racism. But most hadn’t been listening hard enough, it seems (or only to certain voices) as they ran through their reasons for not supporting the motion tabled by councillor Josh Matlow and seconded by Kristyn Wong-Tam to cut the cops’ stipend in 2021 by 10 per cent.

That would have amounted to about $150 million. And while that figure was too much for most and not enough for others on the streets agitating for change, the motion was not just about setting a dollar figure. It was as much about starting a conversation on what policing should look like moving forward as it was about council showing good faith that it’s serious about transforming the way policing is done in the city.

It was thought (hoped) that protests in the streets and conversations sparked around the world by the videotaped death of George Floyd at the hands of police in the U.S. – not to mention other police-related deaths right here in our own backyard and across Canada – had made an impression on our decision-makers. And that we’d finally turned the channel on the need for less talk and more action on the policing file – like, for example, giving priority neighbourhoods agency over how policing is done in their communities.

The police custody death of Regis Korchinski-Paquet, who fell from the 24th floor of a High Park Avenue apartment in late May, had elicited cries for fundamental change in the systems in place to respond to people experiencing mental distress. At the time, there were empathetic words offered by police chief Mark Saunders and Mayor John Tory.

When protests spilled into the streets, there were acknowledgements of systemic racism on the force rarely heard in the city’s political discourse, including from the chief, and promises to do better. Saunders himself spoke about the time for incremental change being over.

Toronto’s Board of Health has declared anti-Black racism a public health emergency. It’s easy to see why when Black people in mental distress are 20 times more likely to be shot by police, and when you look at the rates of poverty in predominantly Black communities in Toronto.

But we were all taken for a ride. All those promises of real change were all just pablum for the masses. Saunders and the mayor were singing a different tune at Monday’s council meeting.

It was just days earlier that a court in Oshawa had heard the role anti-Black racism played in the vigilante-style police beating of Dafonte Miller with a metal pipe by off-duty Toronto police constable Michael Theriault and his brother Christian. The judge, in that case, spoke at length about it.

But when it came time for council to put its money where its mouth is, most offered excuses. The final vote – 6 to 18 – wasn’t even close.

Council supported a motion tabled by Tory instead, which contained a lot of language on a commitment to push “alternative models for community safety response.” The motion also requests the province to bring back police accountability measures passed by the former government of Kathleen Wynne, which were abolished by Doug Ford. That’s never going to happen. The premier has already made that clear.

The other problem is we’ve heard it all before. A number of the reforms being sought, particularly how police respond to people in crisis, were asked for years ago and have yet to be put fully in place. Also, it’s still unclear where the money is going to come from for the promised prioritization in future city budgets of “a robust system of social supports and services, including in Black, Indigenous and marginalized communities.”

Money seems less of an issue, however, when it comes to body-worn cameras for police. Council voted to spend $2.5-$5 million a year outfitting Toronto police with the high tech cams, even as the most recent studies show they do little to change police behaviour. But what’s a few more million when we’re talking police accountability, right? Or is it the cops that the cameras are supposed to protect?

Some opposed to cutting the police budget accused Matlow of “playing politics.” And warned of the panic that would be unleashed in the streets with fewer officers to patrol them. But when anywhere from 50 per cent of all police calls are non-criminal in nature, the argument doesn’t hold.

Members of council who could care less about diversity in the past all of a sudden started speaking in tongues about the impact the cuts would have on the ethnic makeup of the force. Others argued that police services are governed by provincial statute and that council would be setting itself up for a political fight with the Toronto Police Services Board. Maybe so. But that argument was mostly subterfuge.

The city still controls four of seven seats on the Board. Besides, the conversation has to start somewhere. What’s missing is the political will.

In that regard, there has been spotty leadership from the mayor, who put himself on the board when he was elected to push reform that’s been slow to come. The mayor has shown himself to have a blind spot on the issue of anti-Black racism.

He’s gone to council before to make his case on important issues, like the need to fast-track housing and transit projects, for example. He got a designated 10 per cent hike from taxpayers to pay for that. On Matlow’s proposal to cut the police budget, however, Tory argued that he didn’t want to “get stuck” on a number. It was sleight of hand.

The Way Forward action plan passed by the Police Services Board (of which Tory was a member) in 2016 identified some $100 million in efficiencies in the police budget, and that’s mostly from consolidating divisions. A KPMG report came to the same conclusion in 2015. Even Rob Ford had ordered a 10 per cent cut in the police budget when he was mayor. And although that was motivated more by his austerity than changing the nature of the way we do policing, the force managed to find half of that.

But Monday’s debate wasn’t about the facts. It was about not upsetting the police union. At one point, Michael Thompson, council’s lone Black member, who helped draft the mayor’s motion, seemed to be pulling rank on Matlow.

Why, he asked, did Matlow’s motion not identify where cuts would be made? Matlow’s response was that it was not for him to prescribe, but for Black communities with the city’s anti-racism unit and others to tell council where money could be better spent. Matlow was also asked which members of the Black community he had consulted with before floating his motion.

He responded that he had talked to many people. And that he had learned much about his own inability to see the issue of anti-Black racism in the past.

Some viewed that response as opportunistic. But it’s also more than most members of council can say. When the opportunity was presented to demonstrate a meaningful commitment to begin the conversation in how the city does policing, they looked the other way.