NOW MagazineNewsToronto Election 2018: Maybe we should just call the whole thing off

Toronto Election 2018: Maybe we should just call the whole thing off 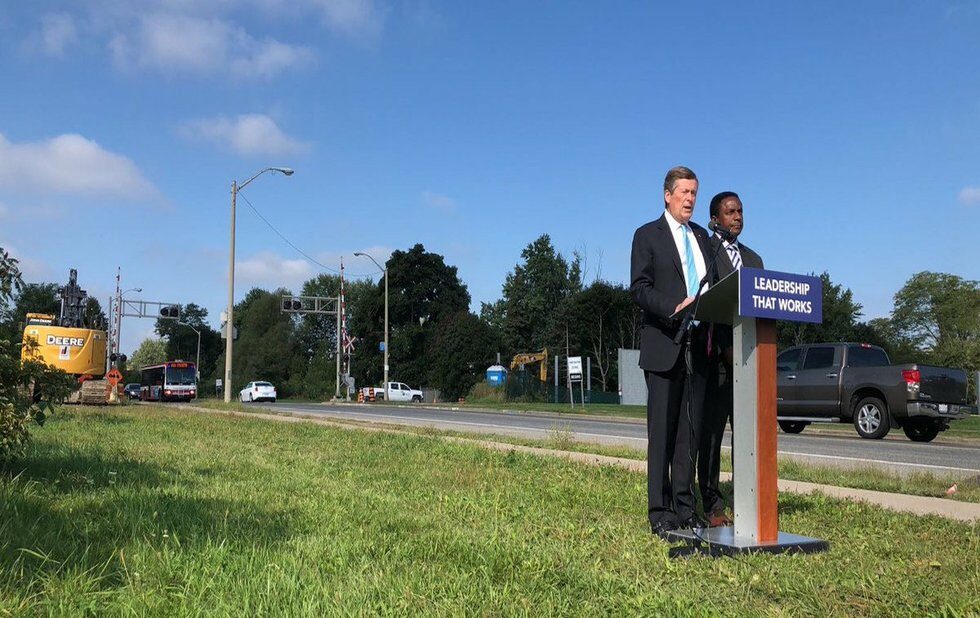 The Parkdale-area councillor’s speech at Thursday’s emergency meeting of council to discuss the city’s next course of action over Doug Ford’s chaotic plan to cut council in half (from 47 to 25 members) was as impassioned a defense of the city as you’ll ever see. Perks forcefully laid out why it’s necessary for the city to take Ford to court (yet again) now that the Premier has made the unprecedented decision to invoke the notwithstanding clause to push through his government’s plan after a court ruled this week that it contravened the Charter.

Then it was John Tory’s turn to speak. As is customary in all matters of council, the mayor gets the last word. Tory was decidedly more matter-of-fact in his tone. There was no fire. No plea about the need for the city to defend itself against Ford’s act of aggression. No rally cry. It felt oddly anti-climactic given the reverberations, legal and otherwise, unleashed by Ford’s madness.

Tory used words like “wrong” and “bad” to describe Ford’s meddling in Toronto’s elections. “Unacceptable” is another word he’s used. It’s much more than that. Justice Edward Belobaba called Ford’s interference “antithetical to the core principles of democracy.” Ford’s obsession to force Toronto to bend to his will has created chaos.

So much so, in fact, that the question has to be asked: should we even have an election? Time is quickly running out on a meaningful contest. Ford’s tampering has created a legal quagmire in which an “unconstitutional city council” could conceivably be elected. And its every move challenged in court. Yes, that’s where we’re at.

City clerk Ulli Watkiss says we’ve reached the “tipping point,” that it’s become “virtually impossible” for her to even fulfill legal requirements imposed upon her by the Municipal Elections Act to carry out “fair and accessible” elections. She’s deadly serious. She’s hired outside legal help to represent her and look into postponing the vote set for October 22.

She told council advanced polls may have to be cancelled, which would mean leaving some 160,000 residents who won’t be able to get to the ballot box on election day without a vote – not to mention those who vote by proxy. The deadline to receive their ballots in the mail will have come and gone by the time the Ford government passes Bill 31, the new legislation tabled Thursday to replace Bill 5.

Legal issues may not be sorted until after the election, even if the Ford government wins an application to stay Belobaba’s decision, which is scheduled to be heard Tuesday.

The longer this mess is drawn out, the less time we’re spending talking about the issues. That would suit Tory, of course.

For all the fallout that has been caused – and has yet to be caused – by Ford’s madness, the fact that we’re not debating affordable housing, transit, city-building and the mess policing is in may be the most damaging consequence unleashed by his election intrusion.

We should be in the post-Labour Day throes of an election race. Instead, we’re in a holding pattern. And we may be here for some weeks.

It’s a crucial time for the city, and not just because Ford wants to cut the shit out of our local democracy. The divide between rich and poor has grown more pronounced. Toronto is becoming less affordable.

Most Torontonians were grateful when Tory beat Ford in the 2014 mayoral race. Even those who had voted for NDP rival Olivia Chow could at least take solace in the fact that, after four years of mayhem at city hall caused by Doug’s brother Rob, civility would return. A massive weight was lifted off a beleaguered city dragged through the mud and left in disarray by the antics of a drug-addled mayor and his older brother councillor, who is now premier of Ontario.

Tory came into office promising big transit plans and a renewed focus on city-building. Fighting congestion was another major plank in his platform, as was improving police-Black community relations strained seemingly beyond repair over the police practice of carding.

Tory’s vaunted road safety plan, Vision Zero, has been a disaster. Toronto just witnessed the deadliest two years on recent record for pedestrian and cycling deaths. And efforts to bring the police force into the 21st century and rein in costs has descended into a war of words with the police union.

On the city-building front, meanwhile, Tory has pushed Rail Deck Park, an ambitious proposal to create a 10-hectare green space downtown. But when push came to shove on the waterfront, he sided with cars over people, locking the city into a decades-long, multi-billion-dollar bill to keep up a decrepit, two-kilometre stretch of the Gardiner so a few thousand motorists can cut three minutes off their rush-hour commute.

At his official re-election launch on Sunday, September 9, Tory cited keeping property taxes in check as a major accomplishment, as well as “massive new investments in child care, community programming and student nutrition, all without tax increases.” He also talked about bringing in free transit for kids under 12, discounted fares for the disabled and the new two-hour transfer system on the TTC.

But it’s also true that poverty is being more acutely felt throughout the city. The city’s shelter system is in crisis.

Tory’s response to this summer’s uptick in gun violence was to first champion a handgun ban (a good thing) and then get behind Ford’s plan to throw more money at the police rather than invest more money in programs that can help youth in priority neighbourhoods stay out of trouble in the first place.

Tory’s record requires scrutiny. But we won’t be talking about any of that as long as Ford is sucking up all the oxygen.