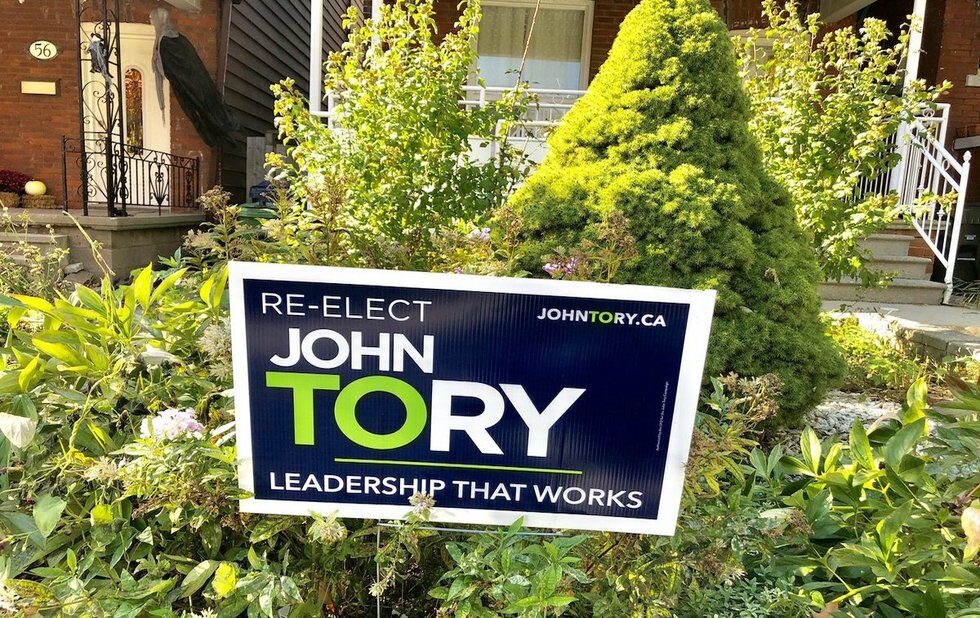 The incumbent mayor won the most anti-climactic mayoral race in recent memory with more than 60 per cent of the vote over nearest rival Jennifer Keesmaat – and he did it without having to defend his lacklustre record in any real way. The writing was on the wall on this one before it got started. Even the local affiliate of the country’s public broadcaster, CBC television, took a pass announcing it would not be covering the results, opting to air former PM Stephen Harper’s fave program Murdoch Mysteries instead.

With Tory at the helm, it’s like that Stones song for Ford, “Under my thumb…”. A tweet from CBC’s 22 Minutes summed up the geist nicely when the results were announced – Breaking: Doug Ford somehow still furious he’s not going to be elected mayor of Toronto. The train wreck is just getting started. With Ford’s power play to take over Toronto’s subway system looming, the Amalgamated Transit Union representing TTC workers was quick to issue a statement soon after the results were announced renewing its call to keep transit public.

The numbers say Keesmaat was soundly defeated, as she captured only 23 per cent of the vote. But she never stood a fair chance. The the die was cast for Tory the moment Ford futzed with the program and decided to cut council in half without moving the deadline for mayoral candidates to register. Keesmaat nevertheless threw herself into the fight at the 11th-hour in an attempt to bring some measure of accountability to the race. She was the city’s best chance at keeping Ford in check. Too bad most voters didn’t recognize that – or maybe they did and that’s why they voted for Tory. Now that’s some kick in the head.

The Eritrean-Canadian human rights lawyer ran a values-based campaign that spoke to racialized Torontonians. She finished well behind, but encouraged many who feel disenfranchised to vote for the first time. She arrived in a horse drawn carriage for her election-night party. Now that’s chutzpah.

Council’s terrible child handled his business against lefty stalwart Joe Mihevc in Toronto-St. Paul’s in one of the most watched races of the campaign. Not even Tory’s endorsement, which Mihevc reportedly requested, was enough in the end for Mihevc. In fact, it may have complicated things for Citizen Joe with his base in the more working-class west end of the riding. Matlow, meanwhile, still has some council colleagues to convince that he’s not just out for himself if he wants to play a bigger role this term.

Council’s only out gay rep won convincingly with more than 50 per cent of the vote in Toronto Centre, despite efforts by former Liberal MPP for the area George Smitherman to throw grenades into the race with a law-and-order play that recalled the days when he was known as Furious George. A host of fringe candidates pissed about development mostly added to the cacophony against Wong-Tam. Still, she prevailed because she always does her homework.

Tory’s TTC chair didn’t actually run for re-election in Eglinton-Lawrence, moving aside so his father, the former Liberal MPP for the are who was swept out of office in the June provincial election, could run in his stead. The elder Colle took back his old riding over Christin Carmichael Greb, thereby relieving council of some deadwood and paving the way for Josh, who has always been destined for bigger things politically, to run provincially next go around. Or is it a federal run he’s got his eye on?

First-term mayors who haven’t completely effed up have rarely faced a stiff re-election test in this town (see David Miller versus Jane Pitfield.) And so it was for Tory. But unlike Miller, who pushed grand transit plans, Tory hasn’t accomplished anything remotely approaching visionary. It’s been back to meat and potatoes issues, like keeping property taxes low, under his watch. Meanwhile, Toronto is headed for a financial iceberg. We never did hear about that during the campaign. Tory and his handlers were able to cover up a thin record of accomplishments with a dash of retail politics and the “leadership what works” sloganeering. Won’t be so easy next time – if, that is, Tory decides to run. He has stated in the past that he only plans to stay on as mayor for two terms, which means the problem will be left for someone else to fix.

The chaos unleashed by Ford’s madness basically sucked all the oxygen out of the election. By the end, Tory was coasting to the finish, ducking debates with Keesmaat and robbing residents of the benefit of any meaningful debate on a raft of issues. Leadership that works or just arrogance? Either way, a sad state of affairs with voter turnout in many wards hovering in the mid-30 per cent range.

Ford’s assault on democracy undercut what was shaping up to be the most diverse city government we’d ever seen. But his move to cut council forced many racialized candidates into unwinnable races and others to drop out entirely, his move to cut council forcing many racialized candidates in unwinnable races and others to drop out entirely. The result is that council is whiter than it has ever been with plenty of the same old right-wing guard (Mark Grimes, Stephen Holyday, Denzil Minnan-Wong, Jaye Robinson, Michael Ford, Jim Karygiannis) winning in the burbs. Council’s left wing still control about half the 25 seats but just like under Rob Ford, they will have to rely on a handful of councillors who now make up the mushy middle to carry votes over Tory. That will be a trickier proposition this term.

The mouth that roared about taking a sledgehammer to social housing had his ass handed to him by Anthony Perruzza in Humber River-Black Creek – even with his campaign signs proclaiming he was “Doug Ford’s choice.” Would have been nice to see Tiffany Ford win this one, but we’ll take Perruzza over Mammo. Hopefully, it’s the last we’ve seen of him. But don’t count on it. A run for a provincial seat seems inevitable with Doug at Queen’s Park.

Council’s first Tamil Canadian, who won his seat in a by-election in 2017 after a number of unsuccessful bids for office, was sideswiped losing by just over 600 votes in Scarborough-Rouge Park to Jennifer McKelvie.

The “red” Star’s editorial endorsing Tory for mayor was about as out of touch as you can get.  In a city increasingly defined by race and poverty, the Star offered readers that they should cast their vote for Tory because he represented the best hope for the burbs. Priority neighbourhoods that have to live under increasing police surveillance thanks to Tory don’t see it that way. Clearly, the Star’s four-member editorial board (which includes one woman and no people of colour) has not been reading its own paper’s city hall coverage.

The fringe mayoral candidate proved a disgrace to the race with her opportunistic – and narcissistic – anti-immigrant fear-mongering. Bell media recognized that and refused to run her ads. Unfortunately, that didn’t stop friends of the self-described “next Prime Minister of Canada” at redneck radio CFRB, the Toronto Sun (and Conrad Black at the National Post) from pushing her cause. They still think she should have been allowed to take part in the debates. Her 15 minutes are up.