He rode into office with ambitious plans for transit and city-building, but a review of the record reveals it's been pretty much downhill from the get-go in the big-deas department for John Tory 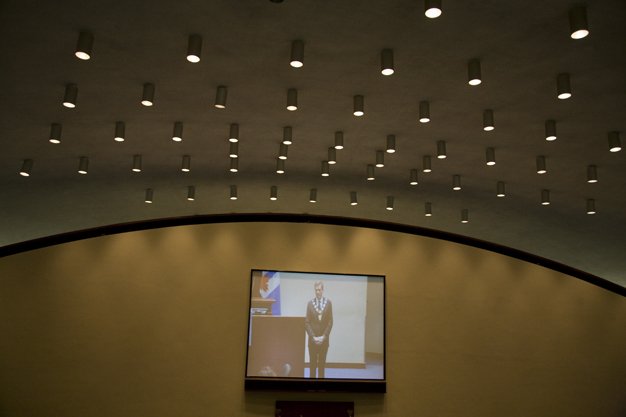 John Tory’s campaign slogan is “Leadership that works.” Well, you gotta give the mayor and his handlers credit for trying to sell voters on something.

The 65th mayor of Toronto has brought back a measure of civility to city hall. But after the gravy train wreck that was Rob Ford, the bar was set low. Tory’s record after four years in office is more middling than inspiring.

That’s not to say he didn’t come into office making big promises. There was SmartTrack, his ambitious proposal to criss-cross the city with 53 kilometres of surface rail. That train has yet to leave the station in any meaningful way. The promised 12 new stations have yet to materialize. (Six are currently under study.) And it failed to take into account a major snafu – the 10-kilometre stretch set aside for the plan along Eglinton West blocked by condo and townhouse development

Easy to forget, too, that Tory fancied himself a city builder when he came to office. But his first signature move was to mortgage a hefty piece of the city’s financial future by propping up a 2-kilometre stretch of the Gardiner Expressway east of Jarvis so motorists could save a few minutes on their commute. That misguided plan, however, had more to do with development in the area. In fact, one of Tory’s chief campaign strategists, John Duffy, was among those lobbying city hall on behalf of First Gulf, and the company’s plans for a mixed-use development on lands at DVP and Lake Shore.

Tory had a choice. He could have decided not to listen to his handlers and, as his chief planner (and current mayoral challenger) Jennifer Keesmaat advocated at the time, pledged to tear down the section and open up the waterfront. Instead, Tory made his play for suburban votes – and friends in high places. It’s been pretty much downhill ever since in the big-ideas department.

It’s the first item on Tory’s list of accomplishments – no joke. Under Tory’s watch, Toronto has become the city with the highest child poverty rate in Canada. He’s also guilty of some creative accounting when it comes to the funding of his own poverty reduction plan.

But that’s not the “affordability” Tory is talking about. What he is talking about is property taxes and the fact he has kept them at or below the rate of inflation during his four-year tenure in office. Not exactly a measure of livability.

But access to transit is, and in that regard, there has been some movement on the policy front under Tory: free transit for kids under 12 and discount fares for low-income workers. How much that has to do with the work of Tory’s TTC chair Josh Colle or Tory himself is debatable.

But the bigger picture doesn’t look so good. Toronto’s transit system has never been so overcrowded, sometimes dangerously so. And planning for Tory’s latest transit priority, the promised Relief Line, is behind schedule. More concerning than that, however, are the province’s plans to take over the subway system. That can only mean more trains to nowhere and grief for TTC riders.

Building affordable housing has never been a strong suit of the city. And the Tory administration is no different. His campaign lays claim to unlocking some 18 city sites to build affordable housing, and the approval of 1,650 rental units in 2018.

During Tory’s time in office, however, rents have gone up some 20 per cent. And vacancies are at a 15-year low.

Tory is promising to work with other levels of government “to support the creation of new affordable rental housing.” It’s a decidedly unambitious approach. By comparison, Keesmaat is promising to build 100,000 affordable housing units. Tory calls that “unrealistic.”

Tory has come through on his promise to increase per capita funding for the arts to $25 – but that’s still half of what Vancouver, Montreal and Calgary contribute to arts funding.

Tory devotes four paragraphs to his administration’s achievements on the cycling file on his website, taking credit for building more than 30 kilometres of network. Some $39 million has been invested on bike infrastructure over the last four years. But the truth is that Tory has had to be dragged kicking and screaming by downtown councillors every inch of the way. Indeed, it wasn’t until a spate of road deaths in the spring that long-promised money for bike and pedestrian-related safety improvements was released by council.

Despite the momentum, Toronto remains one of the worst big cities in the world to bike. Tory supported bike lanes on Bloor (which, it should be kept in perspective, amounts to 2 kilometres in total) but voted against the Transform Yonge proposal that would have placed bike lanes on a dangerous stretch of Yonge between Sheppard and Finch. Tory’s appointment of Jaye Robinson as his point person on public works has proven a disaster. The city has been playing a deadly game of chicken on road safety.

The mayor has boasted about his efforts to hire 200 more police officers in 2018 and plans to hire 200 more in 2019. When he came into office, the idea was to try and keep a lid on the police budget and improve relations between police and the city’s Black communities.

But vaunted plans to modernize the force have crumbled under the weight of police union pressure. And efforts to rebuild trust in priority neighbourhoods have been put aside in favour of more toys for cops, including costly (and questionable) surveillance equipment.

After the deadliest summer on record in recent memory, Tory proposed a handgun ban, an idea he once described as “an empty gesture.”

Fighting traffic congestion was a major plank in Tory’s 2014 platform. But it’s been more cash grab and PR with police tag-and-tow blitzes. Tory did advocate for road tolls, but the former Liberal government of Kathleen Wynne rejected that idea. Tory made some political hay out of that. But the Libs didn’t leave Tory completely twisting in the wind Wynne promised to hand over more money (some $170 million) from gas taxes in 2019, but who knows what Doug Ford will have to say about that.

According to Tory, more than 200,000 jobs have been created since he took office. In fact, the unemployment rate has been slowly declining since before he was elected in 2014. Toronto’s tech sector is booming, but the arrival of Google and Uber hasn’t been all good news for the job market.

There has been much talk under Tory about investment in public space, but outside a $10 million investment in the Bentway (which was mostly made possible by a $25 million private contribution of Judy and Wil Matthews), there’s been more pie in the sky than development on the ground. Among the blue-sky musings: a 10-hectare Rail Deck park, to be funded by “development growth and private sector partnership,” and a 16-kilometre long Meadoway along an east-end hydro corridor.

Toronto has hired a Chief Resilience Officer to “ensure the city is planning ahead when it comes to issues of emergency response, including climate change.” But a $3.2 million investment in the city’s Transform TO climate change plan is a far cry from Tory’s commitment to “get back to work” on climate change after leading a delegation to the Paris climate talks in 2015. Plans for the city to meet its greenhouse gas emission targets won’t happen now until 2050. Tory recently declined and invitation to defend his record on the environment at the Toronto Environmental Alliance debate, one of several he has ditched this campaign. Not exactly the kind of leadership “that works,” but then what did we expect from Tory?