Toronto Election 2018: Mayoral hopeful Saron Gebresellassi is the antidote to the status quo

"I see my primary mission to convert non-voters to voters," says the Eritrean-Canadian human rights lawyer. “I’m not trying to woo the folks who would vote for John Tory.” 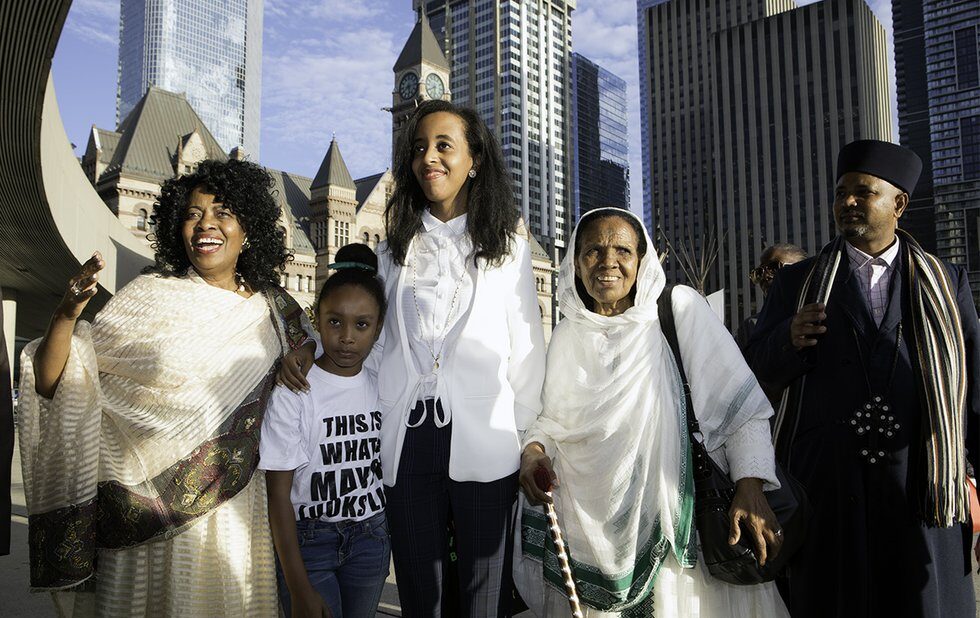 On October 10, the first day of advance voting, mayoral candidate Saron Gebresellassi congregated with a small contingent of first-time voters and community organizers at Nathan Phillips Square. With her parents by her side, the Eritrean-Canadian human rights lawyer outlined the key tenets of her progressive platform: affordable housing, free public transit, less policing and more jobs for youth.

“The experts tell me our communities – the working-class, immigrant communities – don’t vote. I see my primary mission to convert non-voters to voters. That’s the real key ingredient to success,” says Gebresellassi the next day over the phone. “I’m not trying to woo the folks who would vote for John Tory.”

Instead, she positions herself as the antidote to the status quo.

Gebresellassi, 31, grew up in a Toronto Community Housing high-rise near Eglinton and Keele. She studied law at the University of Ottawa, worked on Bay Street, then founded her own firm focused on human rights work. Past cases include a $1 million lawsuit against Starbucks Canada after a female barista was allegedly physically assaulted by her supervisor, and a lawsuit against the Toronto Police Services Board on behalf of a Black mother who alleges officers illegally raided her home. She’s also been the legal counsel to Black Lives Matter – Toronto and was part of the mass mobilization around the G8 and G20 summits in 2010. She came through the ranks of Women Win Toronto, the boot camp championed by Kristyn Wong-Tam to encourage more women in politics.

Throughout the campaign, she’s been a fierce critic of both Tory and Jennifer Keesmaat, who the media has painted as Tory’s only real opposition.

Gebresellassi says neither have shown leadership on the issue of affordable housing, a point that was underscored when Tory skipped the affordable housing debate on October 15, less than a week before the election. After 15 minutes, Keesmaat left the debate, too.

“We have a housing crisis in Toronto, and John and Jennifer lack that sense of urgency,” says Gebresellassi. “I think part of the reason is that they can’t relate to how much people are struggling. John comes from a lot of wealth and Jennifer is also a very wealthy city bureaucrat. They have a lot to say about the Toronto Community Housing Corporation, but I think it’s important that there’s a perspective that’s more authentic.”

Gebresellassi notes that Tory is promising to build 40,000 new affordable rental units in 12 years, but under the Housing Opportunities Toronto (HOT) Plan 2010-2020, the city hasn’t even built 5,000 units. “How could we possibly believe his [new promise] is going to come to fruition when he didn’t deliver this round?” she asks.

Meanwhile, she’s knocked Keesmaat’s definition of “affordable housing,” which Keesmaat considers 80 per cent of market rent. (This is the city’s official definition, too.)

Gebresellassi is promising 20,000 new affordable units over the next four years, and she wants to see the establishment of a new definition of affordable housing that’s geared toward income. She’s also advocating for new inclusionary zoning provisions that would require developers to include at least 30 per cent affordable units in new buildings.

Tory has supported adding new police officers to combat gun violence. Gebresellassi says more policing will not eliminate crime. “Instead of hiring 200 new officers [as Tory proposes], we should create 1,000 new youth jobs,” she says. “We need a preventive approach. I want to get to the root cause and address the poverty problem. I want to see social programs in every corner of the city.”

Gebresellassi is a well-known community activist and notes that she’s been working in politics for years now – she was involved in Jagmeet Singh’s campaign and is the sitting president of her NDP riding association.

Even though she lacks the name recognition of Tory and Keesmaat (who became a minor bureaucratic celeb to progressive downtowners when she was the city planner under Rob Ford), Gebresellassi picked up momentum after a strong showing at the first mayoral ArtsVote debate.

Still, she says it’s been frustrating to see the mainstream media “fixated” on the Tory-Keesmaat race. “Would a Nobel Peace Prize be enough for you? Or an Order of Canada?” she asks.

It might have made more political sense for her to have run for city councillor. But for Gebresellassi, that wasn’t an option since it’s in the mayor’s office where the real power lies.

“For all intents and purposes, I’ve been working as a city councillor without the title for 15 years now,” she says. “And there are a lot of progressive women running in my ward so I didn’t see a gap there. But at the mayoral level, there are a lot of issues not being addressed.”

Gebresellassi sees this campaign as part of a bigger game plan. She’s already eyeing the next mayoral race in 2022, inspired by Alexandria Ocasio-Cortez’s historic win over Joe Crowley in the U.S. mid-terms.

“She’s a great example of why I believe an establishment candidate can be beaten,” says Gebresellassi. “I’m just so excited to see what we can do in four years.”