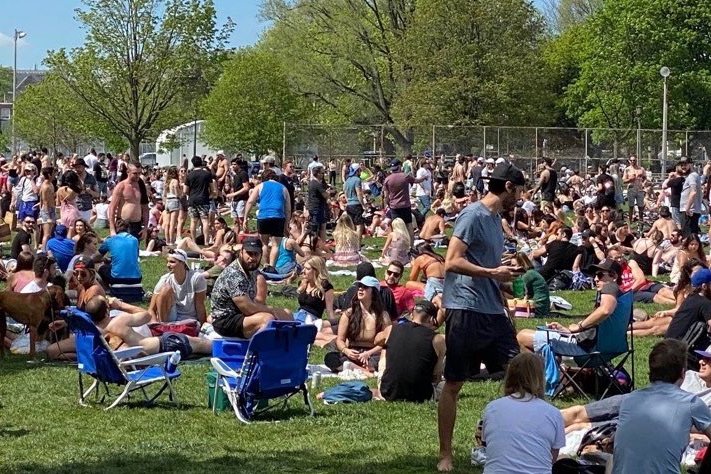 The city of Toronto released a sternly worded statement late Saturday night to denounce “unacceptable” photos of videos of thousands of people hanging out in Trinity Bellwoods Park that circulated online.

“Images today of thousands of people gathered in Trinity Bellwoods Park were unacceptable,” the unattributed statement reads. “Gatherings like this, where people aren’t keeping their distance from others, run the risk of setting Toronto back significantly in its efforts to stop the transmission of COVID-19.

“More than 700 people from Toronto have tragically lost their lives due to COVID-19. Public gatherings, like today’s in Trinity Bellwoods Park, threaten to undo the difficult and challenging work residents of this city have done over the last 10 weeks in their collective effort to beat COVID-19.”

Bylaw enforcement officers and police will have a “visible presence” in the park on Sunday morning, the statement continues. “The physical distancing bylaw and provincial emergency order around gatherings will be strictly enforced.”

City parks have remained open during the coronavirus pandemic, but he city has passed a bylaw requiring people who do not live in the same household to main two metres distance from one another while in public parks or squares.

“That is the science that is what experts like Toronto’s Medical Officer of Health, Dr. Eileen de Villa, tell us,” the statement reads.

The crowd scenes coincided with the first weekend after Ontario began lifting lockdown measures implemented in March to fight transmission of COVID-19. On Tuesday, the provincial government began allowing some retailers to reopen and Toronto reopened more than 850 park amenities by this weekend.

The city’s statement notes that Torontonians kept a distance in the “vast majority” of parks on Saturday afternoon.

The gathering comes at a time when new COVID-19 cases in the city and province are steadily increasing. Toronto Public Health officials have said the continuous uptick in new infections could be the result of families gathering on Mother’s Day.

Toronto reported 228 new cases of COVID-19 on Saturday – more than half of the 412 new cases reported by Ontario public health officials. To date, the virus has killed 750 people in Toronto.

The crowd scenes sparked an online backlash and caused the park to trend on Twitter. A succession of city officials also took to social media to issue stern warnings.

“Across the city today, people went to parks (which have been open throughout the #COVID19 pandemic) and kept their distance from others. That is the right and responsible thing to do,” Mayor John Tory wrote in an Instagram post. “It’s unfortunate and extremely disappointing that so many gathered in Trinity Bellwoods to flaunt the advice of our public health professionals.

“They are putting their own health at risk and by risking the spread of the virus to others, they could contribute to the kind of setback we are trying hard to avoid,” Tory added. “I know from talking to them tonight these are smart people who simply have to do better going forward.”

“I understand that the photos of people in Trinity Bellwoods were disappointing today,” tweeted Toronto’s Medical Officer of Health Eileen de Villa. “It was a beautiful day & we all want to enjoy our city together, but this could be selfish & dangerous behaviour that could set us back.”

“Toronto, this will not end well if we don’t all do our part and respect physical distancing,” Toronto Board of Health chair Joe Cressy tweeted. “Going outside is good for physical and mental health, but at a distance. We’re by no means out of the woods yet. Anything but. Please, we are all in this together.”

Beck Taxi sent a tweet asking the people in Trinity Bellwoods not to call them for a lift home.

One Toronto restaurant has decided to cease delivering food to people hanging out in Trinity Bellwoods Park. Bloordale snack bar Seoul Shakers wrote on Instagram that its delivery people had made a couple trips to the park on Saturday afternoon.

“Witnessing how poorly people were following social distancing rules, if at all, we have decided to put on hold our park deliveries until further notice,” the restaurant wrote. “As tough as it may be to run a small business in these times, it is not worth running the risk of putting our city in a potentially worse situation.”