The #MeToo hashtag started as a callout to folks, primarily women, whod ever been sexual harassed, assaulted or raped. But. 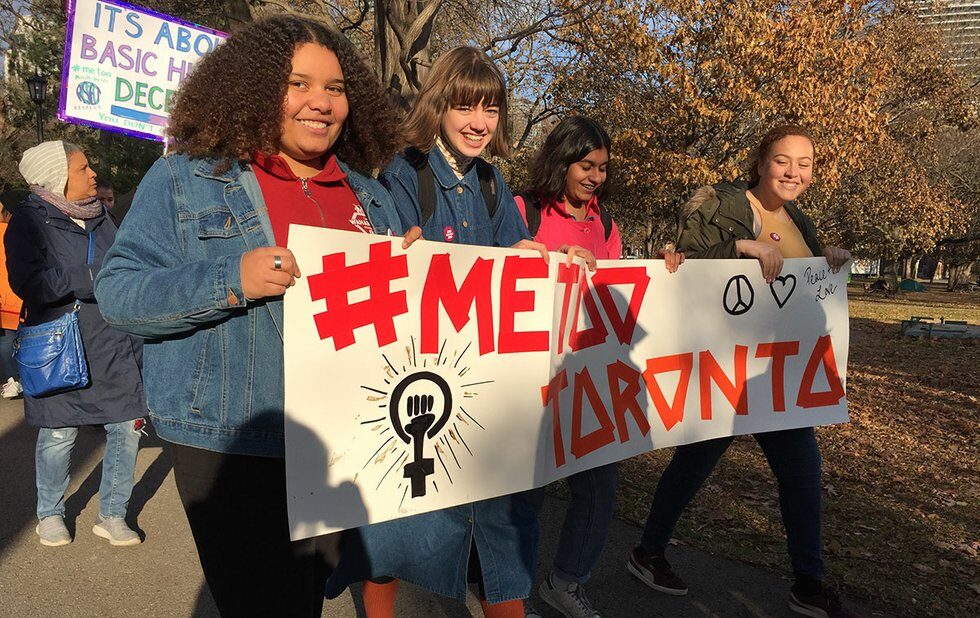 Hundreds of protestors rallied against rape culture and sexual violence at the #MeToo March in Toronto on December 2.|From left to right: Emily Smith van Beek

The #MeToo hashtag started as a callout to folks, primarily women, whod ever been sexual harassed, assaulted or raped. But a Toronto rally inspired by the discussion of those experiences made clear that #MeToo is just the tip of a very large, indeterminate iceberg.

At the #MeToo March on December 2, over a dozen speakers represented the myriad intersectionalities connected to sexual and gender-based violence. Cis-gender men and women were represented, as were queer, trans and non-binary voices. There were members from racialized, Indigenous, Black and Muslim communities, disabled folks, sex workers and at least one speaker living with HIV. In the crowd were children, seniors and every age in between hoisting signs about consent, gender equality and rape culture.

Its not easy telling your story, whether its to one person or a thousand, Kristyn Wong-Tam, the only city councillor in attendance, said to the crowd. I want to let you know that you are safe, you are loved and we will take care of you the best that we can.

Since #MeToo surfaced as a social media hashtag in October, hundreds and thousands of people have shared their stories of sexual harassment and assault. High-profile men including movie mogul Harvey Weinsten, actor Kevin Spacey and comic Louis C.K. have been called out and faced professional repercussions for their alleged behaviour, and many survivors, most notably well-known actors, have had the courage to speak out.

But one of the biggest criticisms of the movement has been its focus on white cis-gender women and the erasure of racialized voices, particularly those of Black and Indigenous women. Even the phrase me too in an activist context was first used decades ago by African-American organizer Tarana Burke to empower racialized survivors of sexual violence. But Black voices and experiences, many argue, continue to be excluded from the current conversation.

#MeToo conversations can be difficult for us because its a constant reminder that our voices are not centred, said Yamikani Msosa, a coordinator at Ryerson Universitys Office of Sexual Violence Support and Education and one of the days speakers. As I look in the crowd, I dont see a lot of Black folks present because I know were not afforded the space to talk about our pain around sexualized violence.

Msosa wasnt the only speaker to point out the lack of intersectionality within the #MeToo movement. Farheen Khan, an organizer with Uniting Muslims and Allies for Humanity, highlighted the issue of violence against Muslim women and the absence of hijabis in the crowd. Indigenous activists including Nicole Tanguay added decolonization to the conversation.

Other forms of gender-based violence such as misgendering, which is the act of referring to someone by a pronoun that doesnt properly reflect their gender identity, as well as the safety of sex workers and the continued criminalization of folks living with HIV, were also part of the demonstration.

While the mood was emotional, there was a sense of hopefulness from those in attendance. Before marching with the crowd from Queen’s Park to Nathan Phillips Square, John Liss, a 70-year-old Toronto resident who held a poster saying, We can/must/will be better, said he felt the Earth move around the time of the Weinstein allegations.

Things have snowballed from there, he said, adding that he hopes his daughter lives in a world where she feels respected. Were changing.

Ryerson University students Alice Frayne and Sophie Defrancesco, also felt it was important to show up at the rally in light of everything thats happened over the past year, including the Women’s March in response to allegations of sexual assault and harassment made by more than a dozen women against Donald Trump.

Small things like cat-calling and men going up to women in bars and clubs and trying to grab onto them those things arent really addressed, said Defrancesco. Bringing awareness to that at events like this is really important.

Frayne added, Change is going to take a long time, but we want to be apart of that.

Integral to that change is creating safe spaces online, in public, at work, in schools and within all levels of government, not only for survivors but for allies to hold meaningful conversations. In his speech, Humberto Carolo, the executive director of White Ribbon Canada, urged men to be part of dismantling rape culture.

“Toxic masculinity is so pervasive,” added Mikiki, an artist, harm-reduction worker and sexual assault survivor, “that we really have to unlearn the maleness that we are taught to really be men who are respectful and living in our communities in meaningful ways.”