Toronto police try to pull the plug on rally against Islamophobia 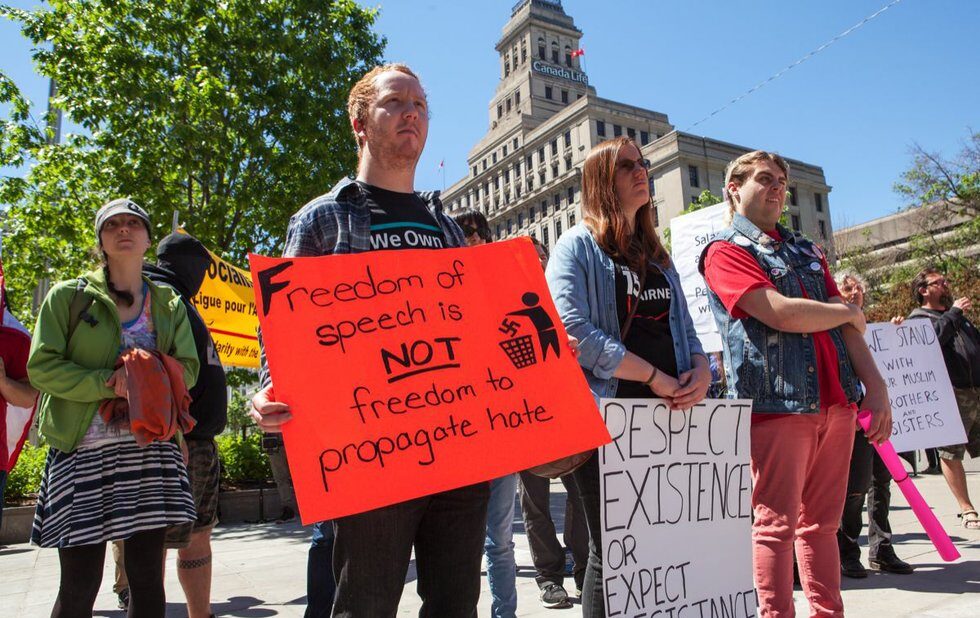 About 100 people gathered at Nathan Phillips Square Saturday, June 3, for a rally against recent anti-Muslim activities carried out by far-right activists in Toronto and elsewhere in Canada.

Organized by the Organizing Committee Against Islamophobia (OCAI), the demonstration took place on the same day that right-wing forces gathered in Ottawa for a “pro-Trump rally” on Parliament Hill billed as a “Million Canadian March.”

OCAI planned to start at 10 am, but police and the square’s security told organizers they didn’t have a permit to use their own sound system, threatening to terminate the whole event.

They presented OCAI with a printout of the applicable city bylaw, with section 636-12(E) highlighted. It states, “No person shall, within the limits of a square, except in accordance with terms and conditions of any permit, use any apparatus, mechanism or device for the amplification of the human voice, music or other sound, or any sound-producing or noise-making instrument or device.”

“They never told us about this before,” says Sarah Ali, an OCAI organizer and emcee at Saturday’s rally.

Police told organizers they would not be able to obtain a permit because another event – to raise awareness for sickle cell anemia – on the main stage was using its own sound system. The police said municipal rules forbid multiple events with multiple sound systems taking place simultaneously. 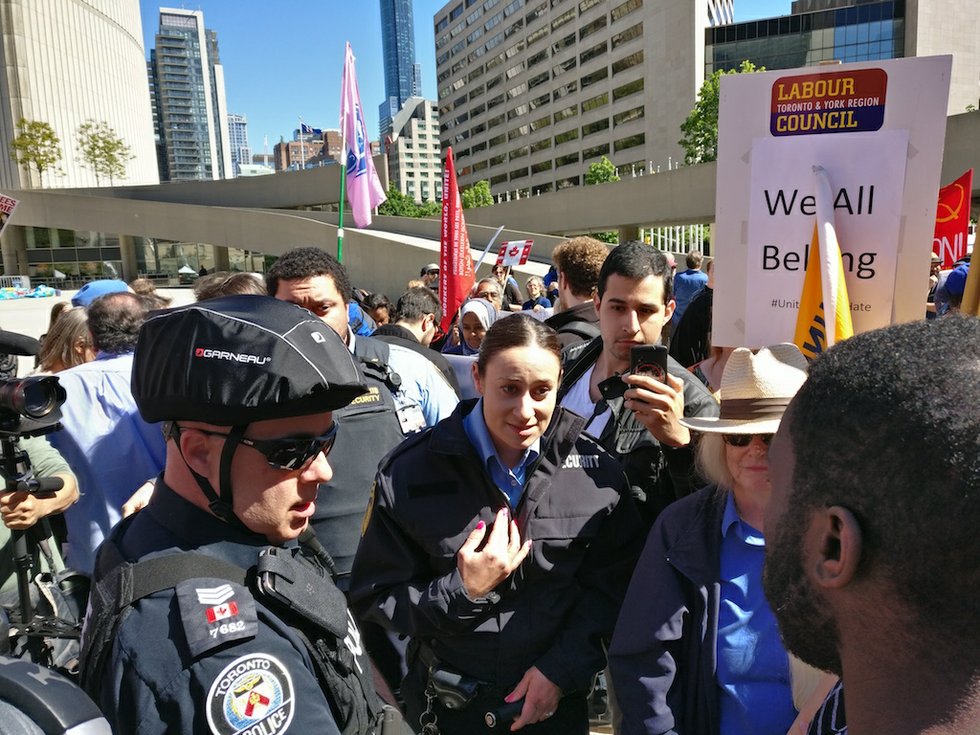 The OCAI event moved to a parkade just northwest of the square next to the courthouse at 361 University.

Despite this successful adjustment, organizers and many attendees saw the authorities’ decision to ban usage of OCAI’s sound system as an attempt to deliberately sabotage the rally.

Suraia Sahar, another coordinator with OCAI, says police didn’t stop far-right demonstrators from using their sound system during a May 6 rally at Nathan Phillips Square that occurred at the same time as a mental health event.

When Ali and Sahar, among other organizers and attendees, asked police and security personnel about this double standard, an officer told them to “feel free to file a complaint.”

NOW could not reach a police spokesperson by press time, but Sahar thinks police actions Saturday are part of a recurring pattern.

The Canadian Coalition of Concerned Citizens (CCCC) has held monthly anti-Muslim demonstrations, billed as protests in defence of free speech, at Nathan Phillips Square since February, some of which have been punctuated by intermittent violence.

Sahar says police response in those instances toward anti-Islamophobia and anti-fascist activists has been disproportionate. Police “have been performing an escorting role for these [far-right] groups, often… refusing to arrest people who commit assaults.”

After the May 6 CCCC rally at Nathan Phillips Square, one anti-racism demonstrator posted a video on YouTube questioning police conduct. According to this demonstrator, police failed to arrest anti-Muslim protesters after an altercation with anti-racist activists. Police handcuffed anti-Muslim protesters for their part in the violence, gave them a talking-to and then released them back into the crowd.

Around 20 antifa activists attended Saturday’s rally. Most of them covered their faces with red and/or black cloth, though one took the stage without a face covering and gave a speech without disclosing his name.

Several antifa activists physically obstructed access to at least two people they recognized as participants in anti-Muslim demonstrations, one of whom took photos of Ali as she addressed the crowd. 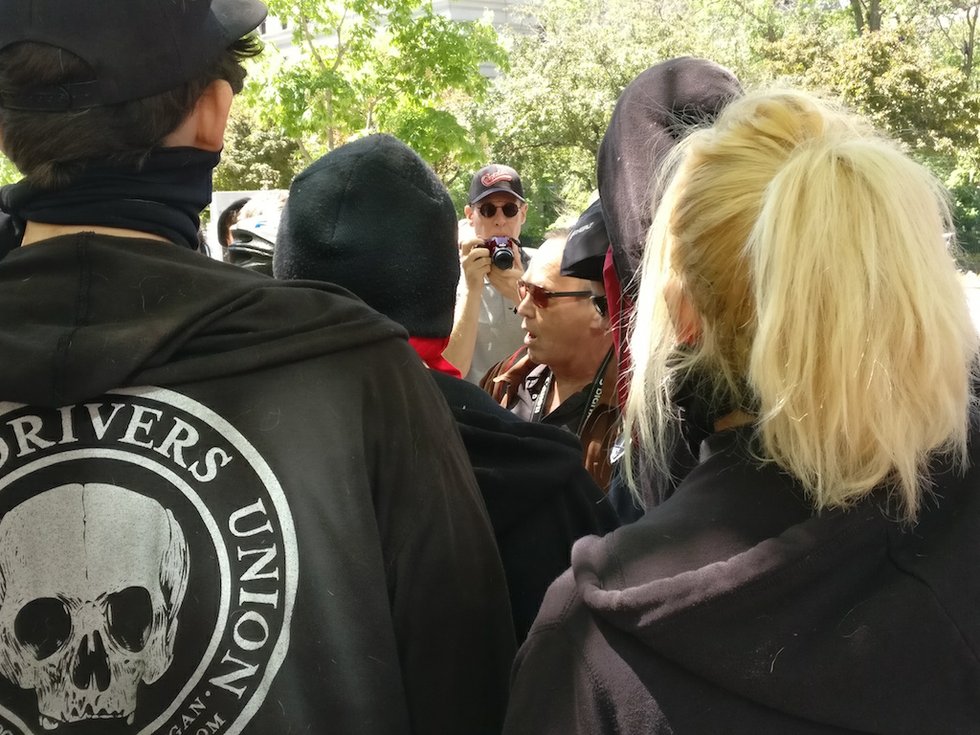 An antifa activist with a bright red face-covering noted that they were uncomfortable with known right-wing activists taking photographs because they often upload them to the internet, where the photos become the basis for online and offline harassment campaigns.

Other speakers included an activist from the trans community who charged police with bias at far-right anti-Muslim rallies where antifa and other counter-protesters are often “attacked and verbally abused.” Police have been very slow to intervene to protect anti-racism counter-protesters, they said.

Journalist and anti-racism activist Desmond Cole, who was among the featured speakers at Saturday’s rally, stressed that anti-Muslim discrimination and racism must be interpreted in light of broader forces that also seek to marginalize groups like the Black and trans communities.

“These people [at anti-Muslim rallies] who are willing to humiliate themselves and everyone around them to express their hate are symptoms of deeper systemic and state violence,” said Cole. “It’s harder to resist and deal with systemic police brutality than to combat the fools who stand outside of City Hall.”