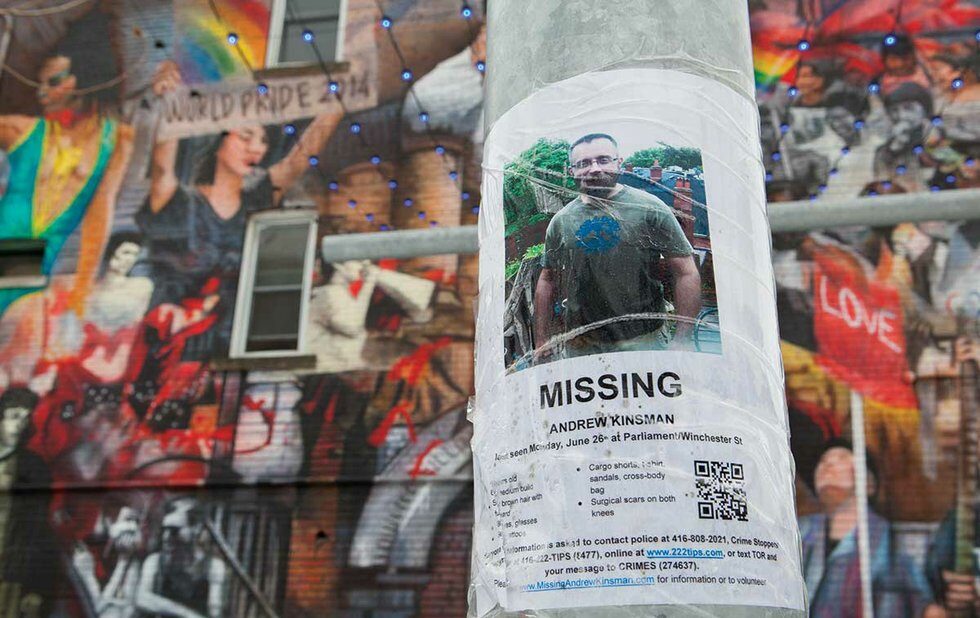 Andrew Kinsman’s disappearance is one of seven that will be reviewed by the police board working group formally set up this week.

These are some of the questions a community-led working group has been tasked to answer as part of an independent review ordered by the Toronto Police Services Board (TPSB) in the wake of the police’s handling of the investigation into alleged serial murderer Bruce McArthur.

The Missing Person Investigations working group, whose terms of reference will be considered at this Thursday’s (June 21) TPSB meeting, is made up of Shakir Rahim of the Alliance for South Asian AIDS Prevention (ASAAP), lawyer Sara Mainville, Monica Forrester of Maggie’s Toronto Sex Workers’ Action Project and TPSB member Ken Jeffers. The final terms of reference and a third-party reviewer to head up the group’s work are expected to be endorsed by the TPSB at its regularly scheduled meeting next month. The review will conclude in September 2019.

The group, says Rahim, “thought long and hard about what should be included in the review, especially from a community perspective.”

Although the board stipulated that the review should not jeopardize the ongoing criminal investigation of McArthur, who is charged with eight counts of first-degree murder, the review will examine the missing persons investigations of Skandaraj Navaratnam, Abdulbasir Faizi, Majeed Kayhan, Selim Esen, Andrew Kinsman, as well as Alloura Wells and Tess Richey.

Earlier this month, two officers were charged with misconduct in the Richey investigation. Richey’s mother, who had driven from North Bay, found her body near where Richey was last seen.

One of the major issues the review will examine is whether missing persons investigations are affected by prejudice, which, as Rahim says, speaks to a widespread community concern that marginalized groups aren’t taken as seriously when they make police reports. The review will also look at whether the police rely on “culturally competent expertise” when interacting with marginalized communities.

“The police service is not necessarily demographically representative of the city,” says Rahim. “So if they’re dealing with a missing person report from a community they may not be familiar with, do they [reach out] to people who do know those communities?”

In an interview with NOW earlier this year, executive director of ASAAP Haran Vijayanathan, who will serve as this year’s Pride parade Grand Marshal, noted that during Project Houston (a special task force set up to probe the disappearance of a number of South Asian gay men in the Village) no one from the police contacted ASAAP.

That leads to another issue the review will address: police relationships to not only large organizations like the 519, but smaller, more community-oriented groups.

“It’s important the police understand the ways in which homophobia impacts the [South Asian and Middle Eastern] community and the factors that cause people to choose to live the way they do,” Vijayanathan says.

The working group has estimated this review will cost approximately $2.5 million. Past reviews concerning the Toronto police will also be examined, including the 1981 review into the bathhouse raids and the city auditor’s report citing negligence in how the police handle sexual assault cases in the aftermath of the Balcony Rapist investigation.

The working group will also look at the Missing Women Commission of Inquiry, which evaluated how the Vancouver police handled the Robert Pickton case.

This year, the Toronto Police will not be marching in the parade in uniform after Pride asked the TPS to withdraw their application, stating in an open letter, “The relationship [between the LGBTQ+ community and the police] cannot be mended through a parade.”

This year’s parade will end with the Until We’re Safe March, where revellers will be encouraged to wear black armbands and t-shirts to honour LGBTQ+ members who have died and those who feel unsafe.

“The alleged Bruce McArthur murders, the Alloura Wells and Tess Richey cases, all highlight that full safety is a dream unrealized,” Pride executive director, Olivia Nuamah, tells NOW. “The march is intended to highlight that to the institutions that exist to keep us all safe.”

As the chasm between the LGBTQ+ community and the Toronto police deepens, some in the community are hopeful the review will help hold the TPS accountable.

Jonathan Valelly of queer and trans collective Queers Crash the Beat says he’s impressed by the detail of the review and grateful for the work done by the committee. But he says the review is just a jumping-off point for “meaningful change.”

Part of that change means empowering communities by “re-imagining the role of police and society, redirecting resources from the police toward grassroots and better-informed initiatives and groups,” Valelly says.

For Rahim, the review is necessary in easing some of the tension and mistrust between the LGBTQ+ community and police, which he says is in “a state of crisis.” But in order for that to happen, the community needs the police’s commitment to change.

“I’m aware that this is just one small part of the solution,” says Rahim of the review. “This is a contribution, but it’s not the solution. The answer is transformation, systemic change and that will take many other efforts.”