With the police custody death of Regis Korchinski-Paquet refocusing attention on the force's spotty record on anti-Black racism, the situation had become untenable for Saunders 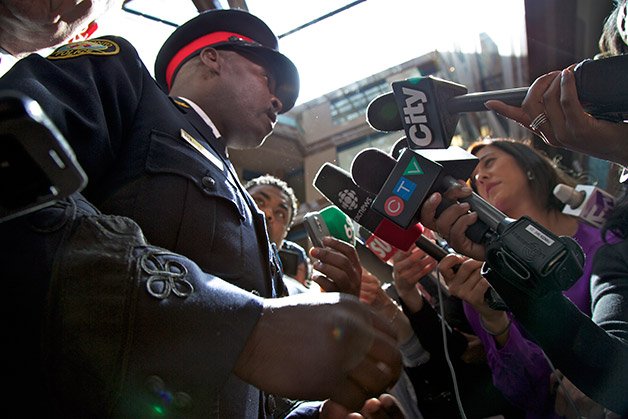 By most accounts, it was a lacklustre tenure. And it ended just as inauspiciously.

Police chief Mark Saunders surprised supporters and detractors alike when he announced on Monday afternoon that he will be stepping down as of July 31. He said he notified Mayor John Tory and his civilian overseers on the Toronto Police Services Board early last week of his decision, which would put that in the days following the police custody death of Regis Korchinski-Paquet – and all the questions that has unleashed about police accountability and the need for reform.

Saunders said that “it’s not with a heavy heart” that he’s leaving the seat. But it was clear from the forced smiles – and one emotional moment during his press conference – that this is not the way he would have preferred to go with so much still hanging in the balance.

The official reason given for his departure was to spend more time with his family. He came back to his family a couple of times during his press conference. (Saunders received a kidney transplant from his wife in 2017.) And as the father of two boys, he said he was looking forward to being “a full-time dad who doesn’t walk into the house an exhausted byproduct at the end of the day.”

For Saunders, the last five years have been a grind. That his contract was quietly extended last April was the first signal the wheels were already in motion for an exit. But that contract wasn’t supposed to expire until April 2021. So why now? Saunders didn’t really answer that question when it was posed to him. He ended up, after a somewhat meandering response, at “a whole lot of things.”

It was hard not to see, however, that the end was nigh. He alluded during his press conference to now being the time for action on policing reform. And on that front, the clock had run out on Saunders.

Saunders was the compromise candidate when he was selected chief over Peter Sloly and the truth is there were no great expectations for radical change. But even the modest transformation promised when he came into the job has not been realized.

While there have been some strides made in more community-based policing and changes to shifts to put more officers on the street when they’re needed, relations with the city’s Black communities have arguably gotten worse under Saunders’s watch.

On that file, there have been many missteps. From his support of carding to the questions of racial bias raised by the police shooting death of Andrew Loku, to his big FU to the police watchdog Special Investigations Unit over the Toronto police beating of Dafonte Miller, Saunders leaves a tainted legacy.

As the city’s first Black chief, and with the events around Korchinski-Paquet’s death refocusing attention on the force’s spotty record on reform and anti-Black racism, the situation was quickly becoming untenable. And no one knows that better than Saunders.

Calls from city councillors to “defund” the police – a motion to cut the 2020-2021 budget by 10 per cent will be debated by council on June 29 – would mean making some difficult decisions that he isn’t prepared to make (judging by recent comments) and that would only earn him more opposition from the Toronto police union.

Some say Saunders got fed up providing cover for a police union that fought him every step of the way. Certainly, he was pressed into action after the Korchinski-Paquet death, taking the highly unusual step of calling a press conference to defend officers from “outrageous lies.” That will be somebody else’s problem now. As will the findings of Judge Gloria Epstein’s review into the force’s handling of the McArthur serial murders, a situation Saunders made worse by claiming there was no killer on the loose only the day before cops searched his apartment.

Saunders praised his command team during his goodbye. But it’s also true that some of those same folks have had their eye on his job, according to one insider. Such is the nature of policing that your friends can also quickly become your enemy. Saunders wouldn’t be the first chief to fall prey to challengers building their own fiefdoms in the force.

And while some of his detractors welcomed news of his departure, the question of whom – and what – comes next looms large.

The chief selection process in Toronto has always been one fraught with politics. It comes with the territory of being one of the most coveted jobs in policing. But it’s never been a process open to outsiders. The police union wouldn’t have it. And the belief among city politicians and higher-ups in the department has historically been that someone familiar with the culture would be preferable.

But the times they are a-changing. Even the Toronto police union knows that. The death of Korchinski-Paquet – and the reverberations for policing reform being felt around the globe in the aftermath of George Floyd’s death in the U.S. – has caused a paradigm shift. There’s no more defending the status quo.